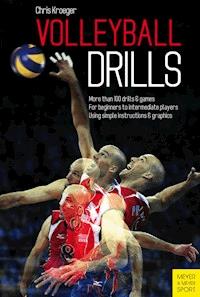 This book features basic drills and games designed to help players improve every aspect of their game. It is a working manual of organized and demanding drills from which practice lessons may be created. Each drill includes a detailed explanation of the purpose, setup, and execution, as well as variations and teaching points.

Chris Kroeger (Institute of Sports Science – University Kiel, Germany) is instructor of the FIVB (International Volleyball Federation) and has conducted Coaches and Teachers Courses in more than 20 countries since 1985. He has won several National Youth and Student Titles.

This book has been very carefully prepared, but no responsibility is taken for the correctness of the information it contains. Neither the author nor the publisher can assume liability for any damages or injuries resulting from information contained in this book.

All rights reserved, especially the right to copy and distribute, including the translation rights. No part of this work may be reproduced—including by photocopy, microfilm or any other means—processed, stored electronically, copied or distributed in any form whatsoever without the written permission of the publisher.

This book contains a collection of approved drills and games that are suitable for trainings with learners and intermediate volleyball players. Additional information, especially concerning techniques (FIVB Technical Posters), drill designs and coaching principles (FIVB Coaches Manual 2011) can be found on the FIVB website:

• precise, coherent and measurable explanations of the drills

• measurement of the drills’ effectiveness -intensity, extent and the recovery.

The load specifications should be set in relation to the actual dynamics of a competition:

Players who cannot actively participate in drills can take over the following functions:

• collect balls (especially if they are rolling on the court)

• supply the coach or server with balls

The supervision and control of a drill are important in order to make it effective and work properly. The role the coach takes for the drill must be defined. In accordance with that definition, these are his options:

• a whole drill led by the players (the players are also supervising the drill).

According to the form of the drill, the location and different movement concepts will have direct influence on certain aspects of the coach’s observation. This means that in (3) the location of the coach may be on a neighbor’s court, whereas in (2) he/she might only observe certain transitions (e.g., transition from block to counterattack). Moreover, in (1) the coach could also observe only the individual defense technique of a single player.

Depending on the capacity of the gym, it is recommended to work on technique improvements only with smaller groups, while the majority of the group should be playing basic games or should be performing drills. After a couple of minutes, the small group changes with some players from the big group.

In order to hold basic games and drills the following equipment is useful:

• ball boxes (can be any available kind of containers; e.g., in a gym, one big or two small gymnastic boxes)

• visualization of balls’ and players’ paths (blackboard, magnet board).

• Determine a focus for the training.

• Shape the exercise to a drill.

• Clarification of the objective

* Explain: what is important?

* Control and supervision standards for the coach

* Control standards for the players

* Who? Number of players

* Where? Tactical instruction + space of action

* When? Time and space structures of the ball and players

• Determine the kind of supervision of the drill.

• Specify the responsibility and the consequences.

• Illustrate the organization of the balls and paths (of players and balls) using examples.

• The players need time to get into a flow/rhythm.

• The coach has to take up his/her suitable observation position.

• Allow time for the reflection.

• Look for accordance with the objective and deviations from it.

Pattern for a movement exercise (basic game or drill)

Creation of a motion concept concerning the flap movement of the top-spin service.

The player is holding the ball in the left hand in a reachable distance in front of the right shoulder. Now, the player is performs the flap movement without dropping the ball (right-hander).

• Hit the ball with the hand in various spots (sidespin)

• Perform the same drill, but use your weak hand

• Make sure to stand firmly

• The correct movement of the elbow is important

• The flap movement can be supported verbally by saying:

The players are standing on the court. The attack line functions as the base line.

Step 1: The players simulate the throw-off movement without a ball and try to internalize the take-off movement. The landing takes place on both legs in the attacking area.

Step 2: Instead of hitting the ball across the net, the players perform the service movement with their weak hand. Keep in mind to hit the ball in the highest possible spot.

Step 3: The players hit the ball across the net from variable positions and distances. Increase the distance of the run-up to the net as the net height is raised.

• Use different types of balls (stage 2)

• Perform the overall movement with a tennis ball (stage 3)

• Variation in the throw-off techniques

Perform a service against a wall and vary your distance from it (4-10 meters).

At the height of approximately 2.5-2.8m there are several targets attached to the wall (e.g., glue strip). Try to hit these targets and catch your ball before it hits the ground.

• Instead of hitting the ball, throw it at the targets

• Increase the distance after successfully hitting the targets

• Perform a bump pass before you catch the ball

• Improve your service accuracy by trying to hit smaller targets

A and B are standing in a target area. Alternately, they serve the balls in such a way that the partner can catch the ball without leaving his/her area. Both vary their position.

• Form a group of four. On both sides of the court, two players stand behind each other — the first player is server, and the second player is receiver. If the service was successful, the partners switch their positions.

• Both players stand in the target area

• Perform a bump pass before catching the ball

• Slowly increase the distance between the target areas

• Try different angles if straight-line service is being performed well

The follow-up movement after the service into the field

Player A and B perform the throw-off simultaneously and hit the balls into a target area on the opposite field. The ball should be hit in such a way that the opponent isn’t able to catch it.

• Instead of catching the ball right away, perform a vertical bump pass first and catch the ball afterward

• Competition with point count: signal is given for the throw-off

• First, practice this drill on one half of the longitudinal field

• Slowly increase the distance between A and B (3m—6m—9m)

The court is divided into six or more target areas (depending on the skills of the players). Every target area requires a certain number of trials. If the player is successful, he/she earns points.

• Before performing the service, the player announces which of the target areas he/she will serve into

• Depending on the level of performance, the sectors can vary in size

• Sectors on the net (antennas)

Two players face each other. The net is divided into smaller sectors with the use of antennas. The players serve the ball to each other (through the net sectors). During the drill, the distance to the net is constantly increased.

• Vary the size of the sectors (glue strip between the antennas)

• Suitable for competition, as well

• Form groups and serve simultaneously through the different net sectors

• In groups of three players with two balls

A stands very close to the net (1-2m) and serves a ball across the lowered net to B, who catches the ball and passes it on to C (later bump pass). In the same time A serves the ball, player B passes a second ball to C, who passes it to A (via ground pass). C varies his/her position so that B has to pass the ball at different angles.

• The distance between A and B is slowly increased