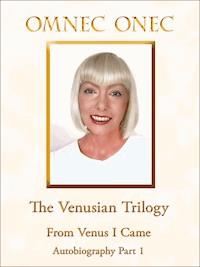 The Venusian Trilogy / From Venus I Came ebook

The Venusian Trilogy / From Venus I Came ebook

Omnec Onec's book "FROM VENUS I CAME" is a unique classic in spiritual literature. It's her autobiography in which she portrays her life on the astral level of Venus. In a very detailed and clear way, Omnec describes the surface, the society, the history, and the life on the astral dimension of Planet Venus. Additionally, Omnec speaks about the adventure of how and why she decided to manifest a physical body, and about her journey to Earth in 1955. FROM VENUS I CAME was first published by the US Col. and UFO Investigator Wendelle C. Stevens in 1991 in the USA. It was sold out very quickly. Omnec Onec: "As I was born on the Planet Venus in another dimension and came to your Planet as a young child, I was able to retain the knowledge and information that I had gathered as a Soul through many incarnations and life times. I can keep this information intact, and what I teach people is actually what I KNOW and not what I've read about or what I've heard, but what I have experienced through many different life cycles on Earth and in other dimensions." – "We came as Soul into the polar worlds for only one reason: To have the experiences which will lead us to becoming a conscious co-worker with the Supreme Deity – the REAL LOVE. Real Love is the energy that flows from the creator and supports all forms of life. Without it, nothing can exist. Therefore we are all universal beings and not limited to one existence. There are no limits to love." 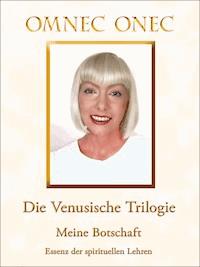 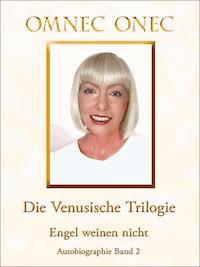 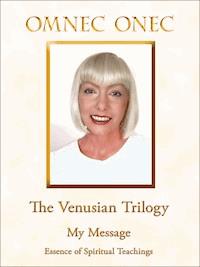 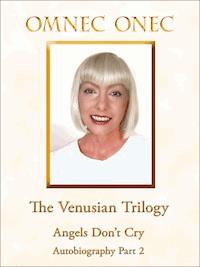 Autobiography Part 1 “From Venus I Came”

Title of the American original edition of part 1: “From Venus I Came”

Visit us on the internet:

All rights reserved. No part of this book may be reproduced, stored in a retrieval system, or transmitted in any form by any means, whether electronic, mechanical, photocopying, recording, or otherwise without prior written permission of DAS GUTE BUCH Verlagsanstalt.

Illustration “Journey of Soul” (in Part 1 “From Venus I Came”): Sandra Beck

Real Love is the energy that flows from the creator and supports all forms of life.

Without it, nothing can exist.

Therefore we are all universal beings and not limited to one existence.

There are no limits to love.

Preface to the American first edition of „From Venus I Came“ by Wendelle C. Stevens, 1991

The Journey of Soul through the Levels of Consciousness

Chapter One: From Venus I Came

It is a great honor for me to re-publish the revised and compiled edition of Omnec Onec’s books which have been very popular for more than twenty years. And I want to give a warm thank you to Omnec!

Sceptics may have nothing but a pitiful smile for her stating “From Venus I Came” in the light of to the commonly known uninhabitability of that planet. However, this is not about the physical planet Venus but about the disclosure of a new but truly ancient world view, which has long fallen into oblivion in our high-tech oriented intellectual society. Yet an increasing number of scientists are slowly discovering that there is some truth in the teachings of the “Ancient Sages” – that our physical existence is not all that exists in the universe and that there are levels of being, both within ourselves and in the outer reality, whose finest vibrations though clearly experienceable can hardly be measured or proved by conventional technology. Thoughts, dreams, near-death experiences – how could they be measured? It would be very helpful if modern science would take a more in-depth look into all those countless reports and references about our multi-dimensional universe. This could lead to a re-alignment of the scientifically designed world view of today’s society.

Thus, esotericism – the science of introspection – and exotericism – the science of extrospection – could be merged into “mesotericism”, the science of the center. Omnec’s books are closely following these lines. Not only fascinating, very practical and highly successful, her books are also speaking directly to the heart and the innate wisdom of her readers. Her advice allows them to become aware of themselves as a spiritual being, as an individualized expression of a Superior Supreme Whole – as a drop in the infinite Ocean of Love and Mercy, yet an individual drop featuring all attributes of the Whole.

This sounds challenging and it is! Omnec’s works are not sophisticated or even shrewd literature, no: she writes just as she talks, straightforward, clear and totally down-to-earth, but always based on a deep spiritual knowledge and a great and warm love for all people, all beings, for our planet Earth, for the universe. Her wisdom of the heart is simple but profound, pioneering and practical, and always seasoned with her good sense of humor.

My special thanks go to Gisela Bongart and Martin Meier from Omega publishing for providing the original texts and to Anja Schaefer who in close collaboration with Omnec put all her enthusiasm and expertise into the rework of the manuscripts.

The new compiled edition consists of both parts of Omnec‘s autobiography with the titles “From Venus I Came“ and “Angels Don’t Cry“ as well as a third part including the essence of her spiritual message with the new title “My Message“. In simple language, Omnec provides valuable hints and hands-on exercises for the readers to gain a deeper understanding of their own spiritual awareness as Soul.

May Omnec’s message reach the hearts of all people and thus become a blessing for each individual and for all!

Baraka Bashad – May the Blessings Be!

1 This foreword was written for the printed edition. As eBOOKS, the three parts of “THE VENUSIAN TRILOGY” are available separately.

Preface to the American first edition of „From Venus I Came“ by Wendelle C. Stevens, 1991

We have had reports of UFO visitors from Venus from the oldest histories, in the Tao Te Ching, and in modern UFO history. A number of UFO contactees were told that their visitors were from Venus. Among the ones who released extensive accounts of these visits are George Adamski, Howard Menger, Kevin Rowe, Bill Clenden, the Mitchell Sisters, Frank and Tarna Halsey, Dr. Wilbert B. Smith, and more.

Our visitor in this book claims conscious physical transfer from Venus, in her Venus body, here to Earth in the same physical body which was, according to her description, densified by stages to live in third density physical. She did not come alone, and she came in a ship which was also densified by stages so as to be physical in third density reality in order to operate here. She and her party, and the densified ship, were all brought to Earth together, in company with others, in a large cigar-shaped transport ship. Final densification took place here on Earth at a temple in the Himalayas, where she learned to adjust to the new conditions on Earth.

Omnec has managed to bring some of her advanced capabilities into our physical density level, although much was lost to its degree. She can still read minds and see auras, feel the experiences of others from their previous lifetimes and perceive future events before they happen. She dominates the out-of-body travel, and to a certain extent, the telekinetic manipulation of matter; she can for example open locked doors in specific situations. She has both an excellent conscious memory of many of her own previous lives and the full memory of her past life on Venus before she was brought here. She can attract butterflies and small birds on her hand and pet them, and wild animals do not run away from her. She writes poems with the same ease with which she writes letters. In one of her letters to me she quickly noted the following:

There is a place we long to be.

It is our home eternally.

We travel there when our bodies sleep at night.

Only to return by day’s early light.

Soul am I, and you as well.

Within this cage of clay we dwell ...

To experience life our lessons we must learn,

Until eons from now our freedom we shall earn.

Since Omnec came to Earth in 1955, she as Sheila has led an insignificant life most of the time. The manuscript of her Venusian life she already completed in 1975. She believes that we will soon see an increase in UFO activity and that many incarnated extraterrestrials in earthly bodies will also become aware of their true identity and make themselves public.

So when you read this account, do not discount it as science fiction, or another spiritual nut seeking attention. You will be reading the conscious recollection of one of those fourth density personalities adjusted back to third density on a benevolent mission for her people and the Venusian spirits taking the grade over again among us, and to us for our own benefit as hosts to the spiritual immigrees.

Here then is the story of Omnec Onec from Venus.

The Journey of Soul through the Levels of Consciousness

The Journey of Soul is an art and science that allows temporarily the departure of the Soul from the physical existence to visit and explore any or all of the worlds beyond the physical universe, in the Soul body.

It was in the deep of night, among the remote mountains and desert Wilderness of Nevada, that the glowing spaceship touched down. The odd humming sound steadily became fainter and fainter. Then, as if from nowhere, a round opening appeared in the circular craft and several figures stepped down into the headlights of an approaching car. One was a tall, handsome man with his long blond hair neatly tucked away under a hat. Beside him stood a little girl and the ship’s pilot. Minutes later, the tall man and his little blond niece were on their way down the bumpy desert road, while the mysterious spaceship sped off into the starry sky.

The most earthshaking revelation will be that since Earth was first colonized, human beings have been arriving from the planets in this very solar system – planets which most people today believe cannot possibly have advanced human life. Their ships land secretly in remote parts of the world where they are met by friends who have already been absorbed into Earth society. Most of the newcomers do become involved in life here, something that has been going on for a long time; but the people who know about us, or even suspect we exist are very few in number.

Today, after two decades of silence, the truth about that chilly desert night can be told. Until this moment, for what has sometimes seemed like an eternity, I have lived the life of Sheila. But Sheila was to be my name only until the time was right for me to tell Earth’s people who I really am, and where I really come from. That time has arrived.