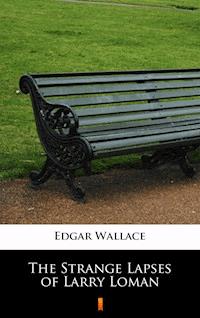 Larry Loman is a member of the Criminal Investigation Department of New Scotland Yard. While on a special assignment in Asia he contracts a form of malaria that causes him to suffer character-changing bouts of amnesia for up to eight hours at a stretch. When Larry is assigned to deal with the Crime Trust, a syndicate which has gathered just about every crook in England into one organization, his periodic blackouts result in all sorts of unforeseen complications. However, he eventually breaks the Trust, and his disease goes into remission. „The Strange Lapses of Larry Loman” is an enjoyable mystery short story by Edgar Wallace with some surprising twists, well written and great to read.

I. THE CRIME TRUST

II. THE AFFAIR OF THE STOKEHOLE

I. THE CRIME TRUST

Sir George Grayborn leaned back in his chair and looked from the young man who sat at the other side of his desk to the notes on pulse, respiration, reflexes, et cetera, he had scribbled on his pad.

“My dear sir,” said Sir George slowly, “yours is a very peculiar case, and I hardly know what to advise you.”

“Do you think I am going mad?” asked the young man with a certain cheerfulness.

He took a gold cigarette case from his pocket and carefully extracted and lit a cigarette.

“I suppose I shan’t horrify your subsequent patients?”

“No, you won’t horrify them, and you can’t horrify me. I recognize in you a unique specimen of the human race apart from being a very interesting case, and I am grateful to the circumstances which brought you here at all.”

“It was rather a fluke,” laughed Larry, “Everybody knows–that is to say, everybody who is interested in me–that my memory has been going all wrong, and, knowing this, some unknown friend had sent me a copy of your work on ‘Mnemotechny.’”

The physician inclined his head.

“I had heard of you, of course,” he said politely. “In our profession one is obliged to keep in-touch with current happenings.”

“Honestly, Sir George,” interrupted the young man, growing serious of a sudden, “is there anything radically wrong with me?”

“Yes and no,” he said. “I gather that somewhere in your wanderings you have struck a very bad malaria patch.”

“That is right,” nodded the other; “up in the Aruwimi country, four years ago. I contracted there all kinds of’ fever. Is there any symptom of malaria?”

“No,” said the other carefully, “not especially, but your mental condition is one which frequently follows either a bad fever or a bad bout of nerves.”

“You can cut out all the nerve theories,” said the young man with decision, “and put it down to fever. The only thing I am worried about is this.” He leaned over the table and emphasized each point by tapping a little tattoo upon the immaculate blotting pad of the consultant. “I am up to my eyes in work–serious and dangerous work. I want all my wits about me because I have a tricky crowd to deal with. Now, if I am not responsible for my actions––”

“Believe me,” said Sir George, “you will always be responsible for your actions. The only thing is–you will not remember everything you do. You are suffering from periodic amnesia, which does not seem to be merely an instance of amnesic aphasia. You will find from time to time whole periods, probably for four or five hours, of your day wiped out of your recollection.”

“You mean to say that I shall wake up one fine morning and forget what happened the previous evening?”

“And more than that. You may go out one day and retain a perfect recollection of what you do until, say, twelve o’clock. You will be able to recall vividly everything that happened from four o’clock onward, but the period between twelve and four, or whatever time the attack occupies, will be an absolute blank. It may last for four, five, or six hours. It may even last a day. You will be perfectly rational–just as rational as you are now–but whatever the period is will be blotted entirely from your recollection.”

He rose, walked to his bookcase, and took down a small skull, and, placing it upon the writing table, picked up a pencil and traced an irregular patch upon the whitened bones.

“Behind here,” he said, “is what is known as ‘Brochia’s Convolution,’ that department of the brain which has to deal with memory. A portion of that convolution in your head is diseased.”

“That sounds rather alarming,” said the young man, with a frown.

“It is not quite so alarming as it sounds, because it need not be a chronic disease, and it is quite possible, by a course of treatment, to restore yourself to a normal state. See me after every bad lapse. You ought, of course, to take a holiday.”

“That is impossible,” said the young man, shaking his head; “wholly impossible! If you assure me that I shan’t make a fool of myself during the period of lapse––”

“I can only assure you that you will be normal,” said the professor, “and if you are liable to make a fool of yourself in normal moments you will certainly be just as foolish. It will only be in your recollection of happenings that you will fail–especially of those happenings which begin with some event of an exciting character. You probably experience a curious, buzzing noise in your ears, and that is about your last recollection before your mind goes blank? I thought so. I suggest that you should carry with you a small notebook, and acquire the habit of jotting down from hour to hour a little diary of impressions, engagements, et cetera.”

Larry shook his head as he rose to go.

“That also is impossible,” he said. “I dare not keep written records–especially of this case.”

“I will not be so indiscreet as to inquire what the ‘case’ is,” said Sir George with a little smile as he led the way to the door.

“That’s the dickens of it!” said Larry ruefully. “Not that it is a secret,” he added quickly. “Even Harley Street has heard of ‘The Trust.’”

The physician raised his eyebrows.

“Surely you aren’t a believer in the existence of a romantic robber band?” he said. “I thought it was a newspaper fabrication. They seem to credit every crime, where the perpetrator is not brought to justice, to that organization.”

“I not only ‘believe,’” said the other emphatically, “but I know, and unfortunately I am the only man who has all the strings of the counter-work in my hand. I told you I could not keep records, and I will explain why. How many times do you think my bureau has been burgled? Six times in four months! Every document I have has been read and reread. Even the record office of the department has not escaped attention. I tell you, The Trust is a very real organization which has bought up the services of every professional criminal in England. Look at the crime tables in the commissioner’s annual report. A fifty-percent decrease of serious burglaries in point of numbers, an eight- percent decrease of ladder larcenies, a ninety-per-cent decrease in big-gang forgeries. Why? Because the report only shows convictions, and those men are no longer caught. They are in the service of The Trust. They get more money than they ever made before. The job is made safer, and if they are caught they don’t have to make a collection among their friends to secure a third-rate lawyer; they have the best legal advice that money can buy. Goddard, the burglar, was defended by an ex-attorney general at the Winchester Assizes the other day, and the fees must have run into a thousand pounds! If they are sent to prison, their wives are in receipt of a handsome separation allowance. Do you wonder that The Trust is recruiting the best men in the business? We are fighting the combine, and we ought to beat it–if my infernal memory had not started playing tricks!”

He threw out his hands in a gesture of despair.

“It is tragic; I am on the very edge of discovery! In a month I should drive a wedge into the gang as would split it from top to bottom–and I’ll do it yet!”

“Yours is the kind of case that the unspeakable Stinie is always touting for,” said Sir George, and, seeing that his words conveyed no meaning to the visitor, he went on: “Stinie is a doctor of sorts; I have had no opportunity of testing his ability. He holds a foreign degree which is not accepted here, but I must say, qualified or not, he is running one of the best nursing homes in London and he professes to make a specialty of cases like yours.”

There was a discreet knock at the door, and Sir George’s butler entered with a card on a tray. The specialist took up the card and adjusted his pince-nez. His eyebrows went up, and he uttered an exclamation of surprise.

“I wonder what he wants? This is the first time he has come to me. Ask the gentleman in.”

The butler departed, and returned in a few seconds, ushering in a stout man immaculately dressed. He had large dark eyes and stiff, upstanding hair and a mustache that gave evidence of consistent and careful training.

“Ah, Sir George, you will pardon me,” he said, speaking with the slightest foreign accent, “I desire you to see one of my patients.”

He bowed to Larry, who returned the salutation.

“It is not possible,” said the newcomer with an exaggerated shrug, “that I should ask you for a consultation, since I am not recognize’ in this country, but if you would be so kind and good to see a most unfortunate fellow with nerve, I should be happy.”

All the time he was speaking to the physician his eyes were fixed upon Larry with a blank stare. Sir George hesitated and made what to Larry was an extremely lame excuse. Then followed an animated discussion on the one part, somewhat cold and unresponsive on the other. The little man now devoted the whole of his attention to the doctor, and pleaded, cajoled, smiled, was desolate, and did not remain still a single second.

“A persistent beggar,” said Sir George after he had gone. “What do you think of him?”

“I have met the type before,” said Larry carelessly. “Now I am afraid I must go.”

He passed into the sunshine of Harley Street, a little disconcerted, but by no means alarmed. His car was waiting unattended, and he cranked it up, and Sir George, watching from the study window, saw him disappear in an evil-looking cloud of smoke.

Larry had a flat near Berkeley Square, and thither he drove, his mind occupied with the interview.

He brought his car to a standstill and jumped out.

“Has anybody called?” he asked the liveried porter.

“Yes, sir; a gentleman came about five minutes ago.”

Larry nodded, and stepped into the elevator.