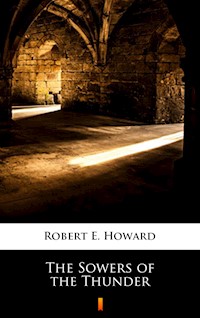 The Sowers of the Thunder ebook

The Sowers of the Thunder is a short story by Robert E. Howard (published in Oriental Stories, Winter 1932) that takes place in Outremer (the Crusader states) in the time of General Baibars and deals with the General’s friendly/adversarial relationship with Cahal Ruadh O’Donnell, an Irish Crusader with a troubled past cut in the Howardian mold. Both the Siege of Jerusalem (1244) and the Battle of La Forbie feature in the plot.

THE IDLERS in the tavern glanced up at the figure framed in the doorway. It was a tall broad man who stood there, with the torch-lit shadows and the clamor of the bazaars at his back. His garments were simple tunic, and short breeches of leather; a camel’s-hair mantle hung from his broad shoulders and sandals were on his feet. But belying the garb of the peaceful traveler, a short straight stabbing sword hung at his girdle. One massive arm, ridged with muscles, was outstretched, the brawny hand gripping a pilgrim’s staff, as the man stood, powerful legs wide braced, in the doorway. His bare legs were hairy, knotted like tree trunks. His coarse red locks were confined by a single band of blue cloth, and from his square dark face, his strange blue eyes blazed with a kind of reckless and wayward mirth, reflected by the half-smile that curved his thin lips.

His glance passed over the hawk-faced seafarers and ragged loungers who brewed tea and squabbled endlessly, to rest on a man who sat apart at a rough- hewn table, with a wine pitcher. Such a man the watcher in the door had never seen–tall, deep chested, broad shouldered, built with the dangerous suppleness of a panther. His eyes were as cold as blue ice, set off by a mane of golden hair tinted with red; so to the man in the doorway that hair seemed like burning gold. The man at the table wore a light shirt of silvered mail, a long lean sword hung at his hip, and on the bench beside him lay a kite-shaped shield and a light helmet.

The man in the guise of a traveler strode purposefully forward and halted, hands resting on the table across which he smiled mockingly at the other, and spoke in a tongue strange to the seated man, newly come to the East.

The one turned to an idler and asked in Norman French: “What does the infidel say?”

“I said,” replied the traveler in the same tongue, “that a man can not even enter an Egyptian inn these days without finding some dog of a Christian under his feet.”

As the traveler had spoken the other had risen, and now the speaker dropped his hand to his sword. Scintillant lights flickered in the other’s eyes and he moved like a flash of summer lightning. His left hand darted out to lock in the breast of the traveler’s tunic, and in his right hand the long sword flashed out. The traveler was caught flat-footed, his sword half clear of its sheath. But the faint smile did not leave his lips and he stared almost childishly at the blade that flickered before his eyes, as if fascinated by its dazzling.

“Heathen dog,” snarled the swordsman, and his voice was like the slash of a blade through fabric, “I’ll send you to Hell unshriven!”

“What panther whelped you that you move as a cat strikes?” responded the other curiously, as calmly as if his life were not weighing in the balance. “But you took me by surprize. I did not know that a Frank dare draw sword in Damietta.”

The Frank glared at him moodily; the wine he had drunk showed in the dangerous gleams that played in his eyes where lights and shadows continuously danced and shifted.

“Who are you?” he demanded.

“Haroum the Traveler,” the other grinned. “Put up your steel. I crave pardon for my gibing words. It seems there are Franks of the old breed yet.”

With a change of mood the Frank thrust his sword back into its sheath with an impatient clash. Turning back to his bench he indicated table and wine pitcher with a sweeping gesture.

“Sit and refresh yourself; if you are a traveler, you have a tale to tell.”

Haroun did not at once comply. His gaze swept the inn and he beckoned the innkeeper, who came grudgingly forward. As he approached the Traveler, the innkeeper suddenly shrank back with a low half-stifled cry. Haroun’s eyes went suddenly merciless and he said, “What then, host, do you see in me a man you have known aforetime, perchance?”

His voice was like the purr of a hunting tiger and the wretched innkeeper shivered as with an ague, his dilated eyes fixed on the broad, corded hand that stroked the hilt of the stabbing-sword.

“No, no, master,” he mouthed. “By Allah, I know you not–I never saw you before–and Allah grant I never see you again,” he added mentally.

“Then tell me what does this Frank here, in mail and wearing a sword,” ordered Haroun bruskly, in Turki. “The dog-Venetians are allowed to trade in Damietta as in Alexandria, but they pay for the privilege in humility and insult, and none dares gird on a blade here–much less lift it against a Believer.”

“He is no Venetian, good Haroun,” answered the innkeeper. “Yesterday he came ashore from a Venetian trading-galley, but he consorts not with the traders or the crew of the infidels. He strides boldly through the streets, wearing steel openly and ruffling against all who would cross him. He says he is going to Jerusalem and could not find a ship bound for any port in Palestine, so came here, intending to travel the rest of the way by land. The Believers have said he is mad, and none molests him.”

“Truly, the mad are touched by Allah and given His protection,” mused Haroun. “Yet this man is not altogether mad, I think. Bring wine, dog!”

The innkeeper ducked in a deep salaam and hastened off to do the Traveler’s bidding. The Prophet’s command against strong drink was among other orthodox precepts disobeyed in Damietta where many nations foregathered and Turk rubbed shoulders with Copt, Arab with Sudani.

Haroun seated himself opposite the Frank and took the wine goblet proffered by a servant.

“You sit in the midst of your enemies like a shah of the East, my lord,” he grinned. “By Allah, you have the bearing of a king.”

“I am a king, infidel,” growled the other; the wine he had drunk had touched him with a reckless and mocking madness.

“And where lies your kingdom, malik?„ The question was not asked in mockery. Haroun had seen many broken kings drifting among the debris that floated Eastward.

“On the dark side of the moon,” answered the Frank with a wild and bitter laugh. “Among the ruins of all the unborn or forgotten empires which etch the twilight of the lost ages. Cahal Ruadh O’Donnel, king of Ireland–the name means naught to you, Haroun of the East, and naught to the land which was my birthright. They who were my foes sit in the high seats of power, they who were my vassals lie cold and still, the bats haunt my shattered castles, and already the name of Red Cahal is dim in the memories of men. So–fill up my goblet, slave!”

“You have the soul of a warrior, malik. Was it treachery overcame you?”