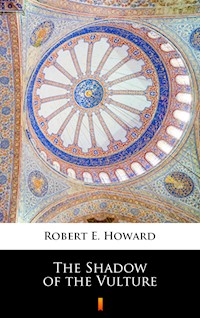 The Shadow of the Vulture ebook

So thay brought the envoys, pallid from months of imprisonment, before the canopied throne of Suleyman the Magnificent, Sultan of Turkey, and the mightiest monarch in an age of mighty monarchs. Under the great purple dome of the royal chamber gleamed the throne before which the world trembled– gold-paneled, pearl-inlaid. An emperor’s wealth in gems was sewn into the silken canopy from which depended a shimmering string of pearls ending a frieze of emeralds which hung like a halo of glory above Suleyman’s head.

SO THEY BROUGHT the envoys, pallid from months of imprisonment, before the canopied throne of Suleyman the Magnificent, Sultan of Turkey, and the mightiest monarch in an age of mighty monarchs. Under the great purple dome of the royal chamber gleamed the throne before which the world trembled– gold-paneled, pearl-inlaid. An emperor’s wealth in gems was sewn into the silken canopy from which depended a shimmering string of pearls ending a frieze of emeralds which hung like a halo of glory above Suleyman’s head. Yet the splendor of the throne was paled by the glitter of the figure upon it, bedecked in jewels, the aigrette feather rising above the diamonded white turban. About the throne stood his nine viziers, in attitudes of humility, and warriors of the imperial bodyguard ranged the dais–Solaks in armor, black and white and scarlet plumes nodding above the gilded helmets.

The envoys from Austria were properly impressed–the more so as they had had nine weary months for reflection in the grim Castle of the Seven Towers that overlooks the Sea of Marmora. The head of the embassy choked down his choler and cloaked his resentment in a semblance of submission–a strange cloak on the shoulders of Habordansky, general of Ferdinand, Archduke of Austria. His rugged head bristled incongruously from the flaming silk robes presented him by the contemptuous Sultan, as he was brought before the throne, his arms gripped fast by stalwart Janizaries. Thus were foreign envoys presented to the sultans, ever since that red day by Kossova when Milosh Kabilovitch, knight of slaughtered Serbia, had slain the conqueror Murad with a hidden dagger.

The Grand Turk regarded Habordansky with scant favor. Suleyman was a tall, slender man, with a thin down-curving nose and a thin straight mouth, the resolution of which his drooping mustachios did not soften. His narrow outward- curving chin was shaven. The only suggestion of weakness was in the slender, remarkably long neck, but that suggestion was belied by the hard lines of the slender figure, the glitter of the dark eyes. There was more than a suggestion of the Tatar about him–rightly so, since he was no more the son of Selim the Grim, than of Hafsza Khatun, princess of Crimea. Born to the purple, heir to the mightiest military power in the world, he was crested with authority and cloaked in pride that recognized no peer beneath the gods.

Under his eagle gaze old Habordansky bent his head to hide the sullen rage in his eyes. Nine months before, the general had come to Stamboul representing his master, the Archduke, with proposals for truce and the disposition of the iron crown of Hungary, torn from the dead king Louis’ head on the bloody field of Mohacz, where the Grand Turk’s armies opened the road to Europe. There had been another emissary before him–Jerome Lasczky, the Polish count palatine. Habordansky, with the bluntness of his breed, had claimed the Hungarian crown for his master, rousing Suleyman’s ire. Lasczky had, like a suppliant, asked on his bended knees that crown for his countrymen at Mohacz.

To Lasczky had been given honor, gold and promises of patronage, for which he had paid with pledges abhorrent even to his avaricious soul– selling his ally’s subjects into slavery, and opening the road through the subject territory to the very heart of Christendom.

All this was made known to Habordansky, frothing with fury in the prison to which the arrogant resentment of the Sultan had assigned him. Now Suleyman looked contemptuously at the staunch old general, and dispensed with the usual formality of speaking through the mouthpiece of the Grand Vizier. A royal Turk would not deign to admit knowledge of any Frankish tongue, but Habordansky understood Turki. The Sultan’s remarks were brief and without preamble.

“Say to your master that I now make ready to visit him in his own lands, and that if he fails to meet me at Mohacz or at Pesth, I will meet him beneath the walls of Vienna.”

Habordansky bowed, not trusting himself to speak. At a scornful wave of the imperial hand, an officer of the court came forward and bestowed upon the general a small gilded bag containing two hundred ducats. Each member of his retinue, waiting patiently at the other end of the chamber, under the spears of the Janizaries, was likewise so guerdoned. Habordansky mumbled thanks, his knotty hands clenched about the gift with unnecessary vigor. The Sultan grinned thinly, well aware that the ambassador would have hurled the coins into his face, had he dared. He half-lifted his hand, in token of dismissal, then paused, his eyes resting on the group of men who composed the general’s suite –or rather, on one of these men. This man was the tallest in the room, strongly built, wearing his Turkish gift-garments clumsily. At a gesture from the Sultan he was brought forward in the grasp of the soldiers.

Suleyman stared at him narrowly. The Turkish vest and voluminous khalat could not conceal the lines of massive strength. His tawny hair was close- cropped, his sweeping yellow mustaches drooping below a stubborn chin. His blue eyes seemed strangely clouded; it was as if the man slept on his feet, with his eyes open.

“Do you speak Turki?” The Sultan did the fellow the stupendous honor of addressing him directly. Through all the pomp of the Ottoman court there remained in the Sultan some of the simplicity of Tatar ancestors.

“Yes, your majesty,” answered the Frank.

Suleyman scowled and unconsciously his fingers wandered to his shoulder, where, under his silken robes, he could feel the outlines of an old scar.

“I do not forget faces. Somewhere I have seen yours–under circumstances that etched it into the back of my mind. But I am unable to recall those circumstances.”

“I was at Rhodes,” offered the German.

“Many men were at Rhodes,” snapped Suleyman.

Suleyman stiffened and his eyes glittered at the name of the Grand Master of the Knights of Saint John, whose desperate defense of Rhodes had cost the Turk sixty thousand men. He decided, however, that the Frank was not clever enough for the remark to carry any subtle thrust, and dismissed the embassy with a wave. The envoys were backed out of the Presence and the incident was closed. The Franks would be escorted out of Stamboul, and to the nearest boundaries of the empire. The Turk’s warning would be carried posthaste to the Archduke, and soon on the heels of that warning would come the armies of the Sublime Porte. Suleyman’s officers knew that the Grand Turk had more in mind than merely establishing his puppet Zapolya on the conquered Hungarian throne. Suleyman’s ambitions embraced all Europe–that stubborn Frankistan which had for centuries sporadically poured forth hordes chanting and pillaging into the East, whose illogical and wayward peoples had again and again seemed ripe for Moslem conquest, yet who had always emerged, if not victorious, at least unconquered.

It was the evening of the morning on which the Austrian emissaries departed that Suleyman, brooding on his throne, raised his lean head and beckoned his Grand Vizier Ibrahim, who approached with confidence. The Grand Vizier was always sure of his master’s approbation; was he not cup-companion and boyhood comrade of the Sultan? Ibrahim had but one rival in his master’s favor–the red-haired Russian girl, Khurrem the Joyous, whom Europe knew as Roxelana, whom slavers had dragged from her father’s house in Rogatino to be the Sultan’s harimfavorite.

“I remember the infidel at last,” said Suleyman. “Do you recall the first charge of the knights at Mohacz?”

Ibrahim winced slightly at the allusion.

“Oh, Protector of the Pitiful, is it likely that I should forget an occasion on which the divine blood of my master was spilt by an unbeliever?”

“Then you remember that thirty-two knights, the paladins of the Nazarenes, drove headlong into our array, each having pledged his life to cut down our person. By Allah, they rode like men riding to a wedding, their great horses and long lances overthrowing all who opposed them, and their plate-armor turned the finest steel. Yet they fell as the firelocks spoke until only three were left in the saddle–the knight Marczali and two companions. These paladins cut down my Solaks like ripe grain, but Marczali and one of his companions fell–almost at my feet.

“Yet one knight remained, though his vizored helmet had been torn from his head and blood started from every joint in his armor. He rode full at me, swinging his great two-handed sword, and I swear by the beard of the Prophet, death was so nigh me that I felt the burning breath of Azrael on my neck!

“His sword flashed like lightning in the sky, and glancing from my casque, whereby I was half-stunned so that blood gushed from my nose, rent the mail on my shoulder and gave me this wound, which irks me yet when the rains come. The Janizaries who swarmed around him cut the hocks of his horse, which brought him to earth as it went down, and the remnants of my Solaks bore me back out of the melee. Then the Hungarian host came on, and I saw not what became of the knight. But today I saw him again.”

Ibrahim started with an exclamation of incredulity.

“Nay, I could not mistake those blue eyes. How it is I know not, but the knight that wounded me at Mohacz was this German, Gottfried von Kalmbach.”

“But, Defender of the Faith,” protested Ibrahim, “the heads of those dog- knights were heaped before thy royal pavilion–”

“And I counted them and said nothing at the time, lest men think I held thee in blame,” answered Suleyman. “There were but thirty-one. Most were so mutilated I could tell little of the features. But somehow the infidel escaped, who gave me this blow. I love brave men, but our blood is not so common that an unbeliever may with impunity spill it on the ground for the dogs to lap up. See ye to it.”

Ibrahim salaamed deeply and withdrew. He made his way through broad corridors to a blue-tiled chamber whose gold-arched windows looked out on broad galleries, shaded by cypress and plane-trees, and cooled by the spray of silvery fountains. There at his summons came one Yaruk Khan, a Crim Tatar, a slant-eyed impassive figure in harness of lacquered leather and burnished bronze.

“Dog-brother,” said the Vizier, “did thy koumiss-clouded gaze mark the tall German lord who served the emir Habordansky–the lord whose hair is tawny as a lion’s mane?”

“Aye, noyon, he who is called Gombuk.”