The blare of the trumpets grew louder, like a deep golden tide surge, like the soft booming of the evening tides against the silver beaches of Valusia. The throng shouted, women flung roses from the roofs as the rhythmic chiming of silver hosts came clearer and the first of the mighty array swung into view in the broad, white street that curved round the golden-spired Tower of Splendor. 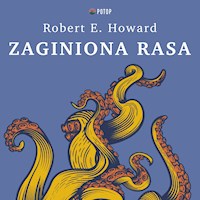 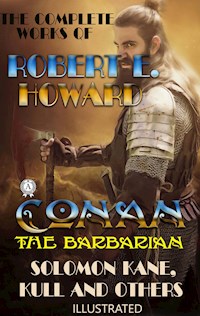 3. THEY THAT WALK THE NIGHT

THE blare of the trumpets grew louder, like a deep golden tide surge, like the soft booming of the evening tides against the silver beaches of Valusia. The throng shouted, women flung roses from the roofs as the rhythmic chiming of silver hosts came clearer and the first of the mighty array swung into view in the broad white street that curved round the golden-spired Tower of Splendor.

First came the trumpeters, slim youths, clad in scarlet, riding with a flourish of long, slender golden trumpets; next the bowmen, tall men from the mountains; and behind these the heavily armed footmen, their broad shields clashing in unison, their long spears swaying in perfect rhythm to their stride. Behind them came the mightiest soldiery in all the world, the Red Slayers, horsemen, splendidly mounted, armed in red from helmet to spur. Proudly they sat their steeds, looking neither to right nor to left, but aware of the shouting for all that. Like bronze statues they were, and there was never a waver in the forest of spears that reared above them.

Behind those proud and terrible ranks came the motley files of the mercenaries, fierce, wild-looking warriors, men of Mu and of Kaa-u and of the hills of the east and the isles of the west. They bore spears and heavy swords, and a compact group that marched somewhat apart were the bowmen of Lemuria. Then came the light foot of the nation, and more trumpeters brought up the rear.

A brave sight, and a sight which aroused a fierce thrill in the soul of Kull, king of Valasia. Not on the Topaz Throne at the front of the regal Tower of Splendor sat Kull, but in the saddle, mounted on a great stallion, a true warrior king. His mighty arm swung up in reply to the salutes as the hosts passed. His fierce eyes passed the gorgeous trumpeters with a casual glance, rested longer on the following soldiery; they blazed with a ferocious light as the Red Slayers halted in front of him with a clang of arms and a rearing of steeds, and tendered him the crown salute. They narrowed slightly as the mercenaries strode by. They saluted no one, the mercenaries. They walked with shoulders flung back, eyeing Kull boldly and straightly, albeit with a certain appreciation; fierce eyes, unblinking; savage eyes, staring from beneath shaggy manes and heavy brows.

And Kull gave back a like stare. He granted much to brave men, and there were no braver in all the world, not even among the wild tribesmen who now disowned him. But Kull was too much the savage to have any great love for these. There were too many feuds. Many were age-old enemies of Kull’s nation, and though the name of Kull was now a word accursed among the mountains and valleys of his people, and though Kull had put them from his mind, yet the old hates, the ancient passions still lingered. For Kull was no Valusian but an Atlantean.

The armies swung out of sight around the gemblazing shoulders of the Tower of Splendor and Kull reined his stallion about and started toward the palace at an easy gait, discussing the review with the commanders that rode with him, using not many words, but saying much.

“The army is like a sword,” said Kull, “and must not be allowed to rust.” So down the street they rode, and Kull gave no heed to any of the whispers that reached his hearing from the throngs that still swarmed the streets.

“That is Kull, see! Valka! But what a king! And what a man! Look at his arms! His shoulders!”

And an undertone of more sinister whispering:

“Kull! Ha, accursed usurper from the pagan isles.” “Aye, shame to Valusia that a barbarian sits on the Throne of Kings.”

Little did Kull heed. Heavy-handed had he seized the decaying throne of ancient Valusia and with a heavier hand did he hold it, a man against a nation.

After the council chamber, the social palace where Kull replied to the formal and laudatory phrases of the lords and ladies, with carefully hidden grim amusement at such frivolities; then the lords and ladies took their formal departure and Kull leaned back upon the ermine throne and contemplated matters of state until an attendant requested permission from the great king to speak, and announced an emissary from the Pictish embassy.

Kull brought his mind back from the dim mazes of Valusian statecraft where it had been wandering, and gazed upon the Pict with little favor. The man gave back the gaze of the king without flinching. He was a lean-hipped, massive- chested warrior of middle height, dark, like all his race, and strongly built. From strong, immobile features gazed dauntless and inscrutable eyes.

“The chief of the Councilors, Ka-nu of the tribe right hand of the king of Pictdom, sends greetings and says:” “There is a throne at the feast of the rising moon for Kull, king of kings, lord of lords, emperor of Valusia.”

“Good,” answered Kull. “Say to Ka-nu the An cient, ambassador of the western isles, that the king of Valusia will quaff wine with him when the moon floats over the hills of Zalgara.”

Still the Pict lingered. “I have a word for the king, not”–with a contemptuous flirt of his hand–“for these slaves.”

Kull dismissed the attendants with a word, watching the Pict warily.

The man stepped nearer, and lowered his voice:

“Come alone to feast tonight, lord king. Such was the word of my chief.”