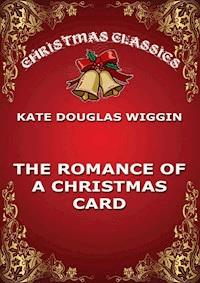 The Romance Of A Christmas Card ebook

How a Christmas card called back a wandering lover to the maiden of his choice is prettily set forth, with many tender and touching details, in "The Romance Of A Christmas Card, by Mrs. Riggs, better known as Kate Douglas Wiggin. New England country life and country talk are agreeably presented. It is the minister's wife who designs the card that brings about the happy reunion of the lovers, and the reader is left to imagine the most delightful and satisfying issue to this joyous event. 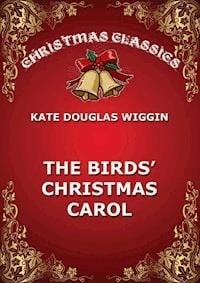 It was Christmas Eve and a Saturday night when Mrs. Larrabee, the Beulah minister's wife, opened the door of the study where her husband was deep in the revision of his next day's sermon, and thrust in her comely head framed in a knitted rigolette.

"Luther, I'm going to run down to Letty's. We think the twins are going to have measles; it's the only thing they haven't had, and Letty's spirits are not up to concert pitch. You look like a blessed old prophet to-night, my dear! What's the text?"

The minister pushed back his spectacles and ruffled his gray hair.

"It has the spirit, if it hasn't the sound," said the minister. "There is always so little spare money in the village that we get less and less accustomed to sharing what we have with others. I want to remind the people that there are different ways of giving, and that the bestowing of one's self in service and good deeds can be the best of all gifts. Letty Boynton won't need the sermon!—Don't be late, Reba."

"Of course not. When was I ever late? It has just struck seven and I'll be back by eight to choose the hymns. And oh! Luther, I have some fresh ideas for Christmas cards and I am going to try my luck with them in the marts of trade. There are hundreds of thousands of such things sold nowadays; and if the 'Boston Banner' likes my verses well enough to send me the paper regularly, why shouldn't the people who make cards like them too, especially when I can draw and paint my own pictures?"

"I've no doubt they'll like them; who wouldn't? If the parish knew what a ready pen you have, they'd suspect that you help me in my sermons! The question is, will the publishers send you a check, or only a copy of your card?"

"I should relish a check, I confess; but oh! I should like almost as well a beautifully colored card, Luther, with a picture of my own inventing on it, my own verse, and R. L. in tiny letters somewhere in the corner! It would make such a lovely Christmas present! And I should be so proud; inside of course, not outside! I would cover my halo with my hat so that nobody in the congregation would ever notice it!"

"Consult Letty, my dear. David used to be in some sort of picture business in Boston. She will know, perhaps, where to offer your card!"

At the introduction of a new theme into the conversation Mrs. Larrabee slipped into a chair by the door, her lantern swinging in her hand.

"David can't be as near as Boston or we should hear of him sometimes. A pretty sort of brother to be meandering foot-loose over the earth, and Letty working her fingers to the bone to support his children—twins at that! It was just like David Gilman to have twins! Doesn't it seem incredible that he can let Christmas go by without a message? I dare say he doesn't even remember that his babies were born on Christmas eve. To be sure he is only Letty's half-brother, but after all they grew up together and are nearly the same age."

"You always judged David a little severely, Reba. Don't despair of reforming any man till you see the grass growing over his bare bones. I always have a soft spot in my heart for him when I remember his friendship for my Dick; but that was before your time.—Oh! these boys, these boys!" The minister's voice quavered. "We give them our very life-blood. We love them, cherish them, pray over them, do our best to guide them, yet they take the path that leads from home. In some way, God knows how, we fail to call out the return love, or even the filial duty and respect!—Well, we won't talk about it, Reba; my business is to breathe the breath of life into my text: 'Here am I, Lord, send me!' Letty certainly continues to say it heroically, whatever her troubles."

"Yes, Letty is so ready for service that she will always be sent, till the end of time; but if David ever has an interview with his Creator I can hear him say: "'Here am I, Lord; send Letty!'"

The minister laughed again. He laughed freely and easily nowadays. His first wife had been a sort of understudy for a saint, and after a brief but depressing connubial experience she had died, leaving him with a boy of six; a boy who already, at that tender age, seemed to cherish a passionate aversion to virtue in any form—the result, perhaps, of daily doses of the catechism administered by an abnormally pious mother.

The minister had struggled valiantly with his paternal and parochial cares for twelve lonely years when he met, wooed, and won (very much to his astonishment and exaltation) Reba Crosby. There never was a better bargain driven! She was forty-five by the family Bible but twenty-five in face, heart, and mind, while he would have been printed as sixty in "Who's Who in New Hampshire" although he was far older in patience and experience and wisdom. The minister was spiritual, frail, and a trifle prone to self-depreciation; the minister's new wife was spirited, vigorous, courageous, and clever. She was also Western-born, college-bred, good as gold, and invincibly, incurably gay. The minister grew younger every year, for Reba doubled his joys and halved his burdens, tossing them from one of her fine shoulders to the other as if they were feathers. She swept into the quiet village life of Beulah like a salt sea breeze. She infused a new spirit into the bleak church "sociables" and made them positively agreeable functions. The choir ceased from wrangling, the Sunday School plucked up courage and flourished like a green bay tree. She managed the deacons, she braced up the missionary societies, she captivated the parish, she cheered the depressed and depressing old ladies and cracked jokes with the invalids.

"Ain't she a little mite too jolly for a minister's wife?" questioned Mrs. Ossian Popham, who was a professional pessimist.

"If this world is a place of want, woe, wantonness, an' wickedness, same as you claim, Maria, I don't see how a minister's wife can be too jolly!" was her husband's cheerful reply. "Look how she's melted up the ice in both congregations, so't the other church is most willin' we should prosper, so long as Mis' Larrabee stays here an' we don't get too fur ahead of 'em in attendance. Me for the smiles, Maria!"

And Osh Popham was right; for Reba Larrabee convinced the members of the rival church (the rivalry between the two being in rigidity of creed, not in persistency in good works) that there was room in heaven for at least two denominations; and said that if they couldn't unite in this world, perhaps they'd get round to it in the next. Finally, she saved Letitia Boynton's soul alive by giving her a warm, understanding friendship, and she even contracted to win back the minister's absent son some time or other, and convince him of the error of his ways.

"Let Dick alone a little longer, Luther," she would say; "don't hurry him, for he won't come home so long as he's a failure; it would please the village too much, and Dick hates the village. He doesn't accept our point of view, that we must love our enemies and bless them that despitefully use us. The village did despitefully use Dick, and for that matter, David Gilman too. They were criticized, gossiped about, judged without mercy. Nobody believed in them, nobody ever praised them;—and what is that about praise being the fructifying sun in which our virtues ripen, or something like that? I'm not quoting it right, but I wish I'd said it. They were called wild when most of their wildness was exuberant vitality; their mistakes were magnified, their mad pranks exaggerated. If I'd been married to you, my dear, while Dick was growing up, I wouldn't have let you keep him here in this little backwater of life; he needed more room, more movement. They wouldn't have been so down on him in Racine, Wisconsin!"