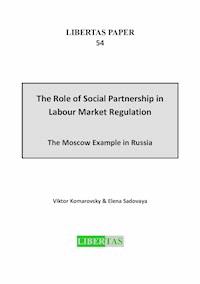 The Role of Social Partnership in Labour Market Regulation ebook

Now widespread is the opinion that the solution of the employment problem as one of the major socio-economic problems in a modern society is one of the most important parameters of maturity and stability in the observed society and at the same time a consequence and a precondition for its successful functioning. International experience and specific features of the Russian economic development give us grounds to believe that in course of serious economic transformations the significance of the state employment policy will grow constantly since an efficient and purposeful employment policy can essentially speed up the economic restructuring, promoting employment through development of a vocational training and retraining system, constraining occurrence of stagnant unemployment, preventing increase of social tension, improving social climate in the country. The concrete implementation of employment policy proceeds at the level of regions, territorial and municipal unities, in all fields. Moscow could be called the most successful example of the regional employment policy implementation as a component of a unified and consecutive process of systematic realisation of progressive development of the socio-economic complex, social protection and social development. During the last of ten years the system of social and labour relations regulation and social partnership play an essential role in stable and purposeful development of the Moscow megalopolis, various systems of its functioning, including such important components as the labour market. At present the advanced and ramified system of interaction between social partners includes 74 and bi- and tripartite agreements. Realisation of these agreements allows to decide confidently the basic tasks of socio-economic development in the capital, to carry out complex measures promoting industrial manufacturing, to stimulate scientific developments in crucial problems of municipal economy and management, to create conditions for normal functioning of small and medium enterprises, to increase living standards of Muscovites and restrain unemployment The social partners have in general elaborated their common approaches to the problems of labour market forming and rational employment policy pursuing. Huge and difficult work lies ahead in the sphere of organisation of closer co-operation between executive bodies and bodies representing interests of trade unions and employers in the social partnership sphere, in the field of development of complex measures to raise workforce potential in Moscow, to form and use rationally the city’s manpower, to upgrade living standards of Muscovites. These activities also include development of interaction mechanisms with federal structures (in particular with the Ministry of Labour and Social Development of the RF), employers’ associations, trade unions and other non-governmental (non-state) structures interested in evolution of social and labour relations regulation system in the city. The aim of this - brought to the reader’s attention - information and reference manual lies in the opportunity to offer a full-scale insight on the core elements of the social partnership system in Moscow, on mechanisms and principles of interaction between social partners in the field of forming and developing the labour market in Moscow that has to correspond to the modern trends and needs while making transformations in the capital. With this purpose this text offers analysis of the current situation, defines the basic directions of the parties’ interaction development and shows opportunities to attract all the interested bodies and organisations (first of all partners in social dialogue) to solution of social-labour and employment problems - from the federal level to the regional and branch level and the level of single enterprises.

The author Viktor Viktorowitsch Komarovsky is a sociologist in Moscow. He graduated as M. Sc. in history at the Moscow State University and obtained a Ph. D. in 1982. After his years as Senior Research Fellow at the Institute of International Labour Movement between 1976 and 1991 he became Chief of the Laboratory of the Institute of Employment Studies RAS (1991-1993), Head of Department in the Institute of World Economy and International Relations (from 1993) and Director of the Institute of Social Partnership Studies (since 1997). Since 2001 he is Principal Officer of the Analytical Centre for Social Partnership Development (within the Employer Association); since 1999 he was repeatedly active in EU Tacis projects, at present as Senior Expert for Social Partnership in the EU Project on Labour Legislation and Arbitration - www.labourproject.org . His e-mail: [email protected]

The co-author Elena Sergeyevna Sadovaya is an economist; she lives in Moscow, too. After having been awarded a Ph. D. in economy at Moscow State University, she worked in different research institutes. Since 1993 she is Senior Research Fellow at the Institute of World Economy and International Relations and since 1997 Deputy Director of the Institute of Social Partnership Studies in Moscow. She can also be reached via [email protected]

The text of this LIBERTAS Paper has been elaborated in 2002. It was prepared for the Analytical Centre of Social Partnership Development, supported by the Department of the Federal State Employment Service in the City of Moscow.

Truthful and duly information on the ever-varying situation in the sphere of labour market regulation in Moscow – a megalopolis of more than 15 million people and the heart of Russia’s economy - is necessary both for the employee (real or potential) and the employer (national or as international investor). The task of this manual is to give an idea of how and in what directions social partners (trade unions, employers’ associations and the Government of Moscow), whose basic function consist in regulation of labour relations between employees and employers can influence forming a favourable situation in the labour market in Moscow.

Employment problems solution at the federal level. Economic activity of the population in 1992-2001.

Employment problems solution through institutes and mechanisms of the social partnership system at the regional level. Moscow.