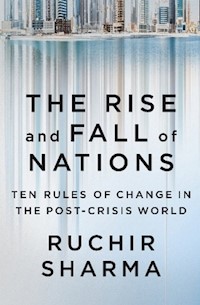 The Rise and Fall of Nations książka papierowa

THE INTERNATIONAL BESTSELLER Entertaining, acute and disarmingly honest Economist A vital guide to the new economic order Rana Foroohar, Time The crisis of 2008 ended the illusion of a golden era in which many people imagined that prosperity and political calm would continue to spread indefinitely. In a world now racked by slowing growth and mounting unrest, how can we discern which nations will thrive and which will fail? Shaped by prize-winning author Ruchir Sharma twenty-five years travelling the world, The Rise and Fall of Nations rethinks economics as a practical art. By narrowing down the thousands of factors that can shape a country future, it spells out ten clear rules for identifying the next big winners and losers in the global economy. The nub of the book is how to spot which countries are likely to succeed, and which to fail, in this impermanent world. Sharma offers a framework of 10 rules. The more of these rules countries achieve, the more they are likely to rise rather than fall ...it may just help you avoid picking losers David Smith, Sunday Times Amazing ...fascinating insights ...quite simply the best guide to the global economy today Fareed Zakaria Lively and informative Martin Wolf, Financial Times As ambitious as it is well executed ...a mix of humble pragmatism and daring decisiveness Reuters