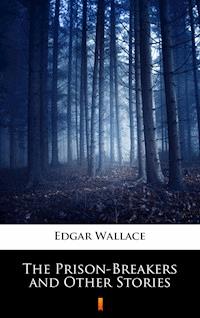 The Prison-Breakers and Other Stories ebook

A collection of short stories from the British Mysteries’ master Edgar Wallace, directly from the Golden Era of the genre. This includes the following „The Prison-Breakers”, „Findings Are Keepings”, „The Jewel Box”, „The Undisclosed Client”, „Via Madeira”, „The Complete Criminal”, „Red Beard”, „Bulfox Asleep”. Have a lot of fun! Edgar Wallace was a British novelist, playwright, and journalist who produced popular detective and suspense stories and was in his time „the king” of the modern thriller. Wallace’s literary output – 175 books, 24 plays, and countless articles and review sketches – have undermined his reputation as a fresh and original writer. In England, in the 1920s, Wallace was said to be the second biggest seller after the Bible.

It was the sort of thing one might expect would happen in the Intelligence Service, and may be briefly related.

Alexander Barnes, who enjoyed a mild fame as a man about town, a regular first nighter at all the new plays, a familiar figure at private views, was arrested on a charge of wilfully shooting Cristoforo P. Supello. With him was also charged an American who gave the name of “Jones.”

The facts elicited at the trial were briefly as follows:

Barnes and Jones had been dining at the “Atheneum Imperial” and had strolled out into Pall Mall. A few minutes later the officer on point duty at the end of Waterloo Place heard three shots fired in rapid succession. The shots came from the direction of the Duke of York’s statue, and the constable ran towards the sound and was joined by two other policemen who arrived from the other end of the thoroughfare. The man, Supello, was lying on the ground dead. Barnes and Jones were caught at the top of the Duke of York’s steps leading down into St. James’s Park, and were secured without difficulty.

The fact that they attempted to escape did not support the story which Barnes told, namely, that he had been attacked by Supello and had fired in self-defense. Undoubtedly a revolver was found in the dead man’s hand with one chamber discharged. In Barnes’s possession was an automatic pistol from which two shots had been fired (the shells were discovered on they following morning), but no weapons of any kind were found on Jones. Both Jones and Barnes swore they were attacked first, and the fact that three shots were fired and that two of them had been found in Supello’s heart proved that the first had been fired by him, since medical evidence demonstrated that he could not have used a revolver subsequent to receiving the wounds which killed him.

With such evidence it seemed humanly impossible that the charge could be persisted in, yet Barnes was found guilty of manslaughter and sentenced to ten years’ penal servitude, whilst Jones was discharged.

The conviction was secured on the evidence of a homeless man who said he was dozing on the steps of a house when he heard an altercation and saw Barnes draw and flourish his pistol in the face of Supello, and by the further evidence of the butler of Mr. Stieglemann, the international financier, who alleged that he, too, was a witness of the affair, and said that he heard angry words between the parties, and corroborated the statement of the night-waif in so far as the flourishing of weapons was concerned.

The occurrence created something of a sensation, for Barnes was a fairly well-known man who lived a blameless and–save that he had a trick of disappearing from London at odd intervals, nobody knowing whither –an unsuspicionable life.

Alexander Barnes accepted his sentence philosophically, although he had a young wife to whom he was passionately devoted. He possessed that serene faith in his department which makes up nine-tenths of the moral equipment of the Intelligence Man.

He did not tell the judge that he and “Jones” of the Washington Secret Service had intercepted Supello on his way to a certain Embassy with the full text of the Salem-Ponsonby Treaty in his pocket, or that they had followed Supello, a most notorious trafficker in government secrets, from the hotel; or that they had sat watching him at dinner until the lady from the Embassy had passed Supello’s table and had dropped a white rose as a sign that his Excellency had agreed to pay the stiff price which the Mexican had asked.

They shot him and had ripped the treaty from his inside pocket, and Jones had dropped the document into the nearest street sewer, but, honestly, Supello had fired first. Barnes could not tell this interesting and romantic story, partly because he would not have been believed, and partly because it is the rule of the Higher Intelligence Circle never to bleat. If you are caught you must take your medicine with a smiling face and send no S.O.S. messages to your unknown chiefs for succour.

“Mr. Jones” was informed that his presence in England was no longer an absolute necessity, and he departed for New York and was accompanied to his cabin by police officers.

When the big liner was fifty miles from Mersey mouth, he was visited by a quiet man who talked with him for a long time. This man was Bland, Chief of the Intelligence Service, who left the boat at Queenstown and made his way back to London.

He sought an interview with the Minister of the Interior, and the result was not especially successful.

At the end of a very hopeless quarter of an hour, he shrugged his shoulders. “I quite understand, sir,” he said as gently as he could, “my suggestion is very irregular, but then the situation is a little extraordinary. We are on the verge of war–”

“That is a matter of opinion, sah,” said the other gruffly.

He always said “sah,” and as “Sah” he was known throughout the services.

He was a thin man with a towsy mop of pure white hair, his face was thin, his mouth was thin, and he looked out onto the world through the narrowest slits of eyes that Bland had ever seen in a man.

Sir George Mergin had been Minister off and on over a period of twenty years in one administration or the other. He was known as narrow, but safe.

He ran his department on rigid regulation lines, wrote with a quill pen, and drank a glass of sherry at eleven in the forenoon.

Small wonder then that he regarded the Chief of the Intelligence Bureau and his preposterous schemes with resentment.

“You see, Mr.–er–Bland, you have no–er –official status. You are in no vote and come under the–er –administration of no department.”

“In fact, we’re nobody’s darlings, sir,” smiled Bland, “and have no Chief to whom we can appeal. The Interior loathes us, the P.V. police are jealous of us, the Foreign Office, whom we serve, pretend that they do not know that there is such an organization as the Secret Service–”

There came a gentle tap at the door and a secretary entered. He crossed to his Chief and said something in a low voice.

Bland concealed a smile. It was no coincidence that Assistant- Commissioner Goldring should make his appearance at that moment. Goldring had control of the Political Department and ran a secret service of his own. It was little more than a glorified detective force, which was employed in tracing dangerous aliens and keeping an unfriendly eye upon the comings and goings of known anarchists. It was a department which boasted of its linguistic gifts and was known at the Yard as the “P.V. Division “–“P.V.” standing for “parlez-vous.”

And here it may be said that the regular police force entertained a most profound contempt for the P.V.‘s, their prescience and their capacity, and invariably favored Bland’s department when a decision had to be made for one or the other.

Goldring came in, bowed graciously to the Chief, and favored Bland with a little nod.

“Ah, Commissioner, I am glad you have come, sah! Now I will put it to you, Mr. Goldringor perhaps, Mr. Bland, sah, you would like to explain your–er–curious project.”

Bland knew as well as any that Goldring was well aware of the business and that he had already been consulted.

“I suggest that Alexander Barnes should be set at liberty,” he said. “Mr. Goldring knows all that Barnes was doing. He was out to find the man who had bribed a Foreign Office clerk to supply him with a copy of the Salem-Ponsonby Treaty.”

“And shoot him?” suggested Goldring, shaking his head with an assumption of gravity. “Surely there is a law in the land to deal with such crimes as you suggest Supello committed; surely he could have been arrested?”

Bland looked at him with a pitying smile which made the other hot and angry.

“No, sah!” said the Minister shortly; “I can do nothing, sah–nothing. It is absurd to ask such a thing. Bring me a request from my excellent friend, the Foreign Minister, or let the Under-Secretary substantiate your statement, and in the public interest I might bring Clause 475 of the Act of Defense into operation, but otherwise–no!”

“Personally,” interrupted Goldring, “I doubt the whole story. I am not exactly without information, Mr. Bland; you don’t suggest that you know any more of what is happening in England than I?” he asked archly.

“I know that our friend Stieglemann gives. excellent dinners,” he drawled. “I know that after dinner his guests play roulette, and that if Stieglemann wishes he can always win–it is useful.”

“What do you mean?” demanded Goldring, very red.

“By ‘useful’? I’ll tell you. Suppose a police official lost five hundred pounds at a sitting, and Stieglemann tore up that police officer’s I.O.U. for that amount, would not this officer be under some obligation to his admirable host? You ask me what I know more than you–I’ll tell you. Stieglemann’s roulette board is faked. You didn’t know that, did you?”

Goldring met Bland’s challenging eyes and dropped his own before them.

“I am going now,” Bland went on, picking up his hat, “but before I go I will say this. The two witnesses against Alexander Barnes were planted. Stieglemann’s butler is an alien agent; the tramp who saw everything is another. But they don’t count, because Alexander would have killed Supello anyway sooner than allow the Salem-Ponsonby Treaty to go to its purchaser. You refuse me help to release Barnes–I will release him myself and take him through England under the nose of your police.”

Sir George rose in a trembling fury. “You threaten me, sah!” he quavered.