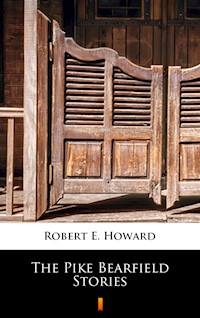 Robert E. Howard turned to writing comic and dialect Western tales only late in his career, but he found an immediate and continuously successful market for them, and they are in many respects his most accomplished and polished works. „The Pike Bearfield Stories” is a collection of stories in the western genre, featuring Pike Bearfield – the character who lead well-intentioned lives of perpetual confusion, mischance, and outright catastrophe. It includes: „While the Smoke Rolled”, „A Gent from the Pecos Shave That Hawg! „, „Gents on the Lynch”, „The riot at Bucksnort”. They are reminiscent of traditional southwestern tall tales, told in dialect, featuring larger-than-life characters, swift action, broad satire, and wry humor. All stories are fast-paced with simple yet effective plots that have a few surprises thrown in for good measure.

A GENT FROM THE PECOS SHAVE THAT HAWG!

GENTS ON THE LYNCH

THE RIOT OF BUCKSNORT

–Wilkinson’s History of the Northwest

WOLF MOUNTAIN, TEXAS. March 10, 1879 Mister WN. Wilkinson. Chicago, Illinoy. Dear Sir: The schoolmarm down to Coon Creek was reading the above passage to me out of yore history book which you writ. It ain’t no mystery. It’s all explained in this here letter which I’m sending you which has been sticking in the family Bible along with the birth records for years. It was writ by my grandpap. Please send it back when you’ve read it, and oblige. Yores respeckfully. Pike Bearfield, Esquire.

Well, pap, I hope you air satisfied, perswading me to stay out here on the Missoury and skin bufflers and fight musketeers, whilst everybody else in the family is having big doings and enjoying theirselves. When I think about Bill and John and Joel marching around with Gen’ral Hickory Jackson, and wearing them gorgeous unerforms, and fighting in all them fine battles yore having back there I could dang near bawl. I ain’t going to be put on no more jest because I’m the youngest. Soon’s I git back to Saint Louis I’m going to throw up my job and head for Tennessee, and the Missoury Fur Company can go to hell. I ain’t going to spend all my life working for a living whilst my wuthless brothers has all the fun, by golly, I ain’t. And if you tries to oppress me any more, I’ll go and enlist up North and git to be a Yankee; you can see from this how desprut I be, so you better consider.

Anyway, I jest been through a experience up beyond Owl River which has soured me on the whole dern fur trade. I reckon you’ll say what the hell has he been doing up the river this time of year, there ain’t no furs up there in the summer. Well, it was all on account of Big Nose, the Minnetaree chief, and I git sick at my stummick right now every time I see a Minnetaree.

You know the way the guvment takes Injun chiefs East and shows ‘em the cities and forts and armies and things. The idea being that the chief will git so scairt when he sees how strong the white man is, that when he gits home he won’t never go on the war-path no more. So he comes home and tells the tribe about what he seen, and they accuse him of being a liar and say he’s been bought off by the white folks; so he gits mad and goes out and sculps the first white man he meets jest to demonstrate his independence. But it’s a good theery, anyway.

So they taken Big Nose to Memphis and would of took him all the way to Washington, only they was scairt they’d run into a battle somewheres on the way and the cannon would scare Big Nose into a decline. So they brung him back to Saint Charles and left him for the company to git him back to his village on Knife River. So Joshua Humphrey, one of the clerks, he put a crew of twenty men and four hunters onto the Pirut Queen, and loaded Big Nose on, and we started. The other three hunters was all American too, and the boatmen was Frenchies from down the Mississippi.

I wisht you could of saw Big Nose. He had on a plug hat they give him, and a blue swaller-tailed coat with brass buttons, and a big red sash and broadcloth britches–only he’d cut the seat out of ‘em like a Injun always does; and the boots they give him hurt his flat feet, so he wore ‘em tied around his neck. He was the most pecooliar-looking critter I ever laid eyes onto, and I shuddered to think what’d happen when the Sioux first ketched sight of him. Big Nose shuddered too, and more’n I did, because the Sioux hated him anyhow, and the Tetons had swore to kiver a drum with his hide.

But all the way up the Lower River he was like a hawg in clover, because the Omahas and Osages and Iowas would come down to the bank and look at him, clap their hands over their open mouths to show how astonished and admireful they was. He strutted and swelled all over the boat. But the further away from the Platte we got the more his feathers drooped; and one day a Injun rode up on the bluffs and looked at us as we went past, and he was a Sioux. Big Nose had a chill and we had to revive him with about a quart of company rum, and it plumb broke my heart to see all that good licker going to waste down a Injun’s gullet. When Big Nose come to, he shed his white man’s duds and got into his regular outfit–which was mostly a big red blanket that looked like a prairie fire by sunset. I told Joshua he better throw the blanket overboard, because it was knowed all up and down the river, and any Sioux would recognize it at a glance. But Joshua said if we threw it overboard we’d have to throw Big Nose overboard too, because he thought it was big medicine. Anyway, he said, they warn’t no use trying to keep the Sioux from knowing we was taking Big Nose home. They knowed it already and would take him away from us if they could. Joshua said he aimed to use diplomacy to save Big Nose’s sculp. I didn’t like the sound of that, because I notice when somebody I’m working for uses diplomacy it generally means I got to risk my neck and he gits the credit. Jest like you, pap, when you git to working and figgering, like you say, the way it always comes around you do the figgering and I do the working.

The further north we got, the closter Big Nose stayed in the cabin which ain’t big enough to swing a cat in; but Big Nose didn’t want to swing no cat, and every time he come on deck he seen swarms of Sioux all over the bluffs jest fixing for to descent on him. Joshua said it was hallucernations, but I said it would be delirium trimmings purty soon if that jug warn’t took away from him.

We made purty good time, ten to twenty miles a day, except when we had winds agen us, or had to haul the boat along on the cordelle–which is a big line that the Frenchies gits out and pulls on, in case you don’t know. Towing a twenty-ton keelboat in water up to yore neck ain’t no joke.

Every day we expected trouble with the Sioux, but we got past the mouth of the Owl River all right, and Joshua said he guessed the Sioux knowed better’n to try any monkey business with him. And that very day a Yankton on a piebald hoss hailed us from the bluffs, and told us they was a hundred Tetons laying in ambush for us amongst the willers along the next p’int of land. We’d have to go around it on the cordelle; and whilst the boatmen was tugging and hauling in water up to their waists, the Sioux aimed to jump us. The Yankton said the Tetons didn’t have nothing personal agen us white men, and warn’t aiming to do us no harm–outside of maybe cutting our throats for a joke–but you oughta herd what he said they was going to do to Big Nose. It war plumb scandalous.

Big Nose ducked down into the cabin and started having another chill; and the Frenchies got scairt and would of turnt the boat around and headed for Saint Charles if we’d let ‘em. Us hunters wanted Joshua to put us ashore and let us circle the p’int from inland and come onto the Sioux from behind. We could do a sight of damage to ‘em before they knowed we was onto ‘em. But Joshua said not even four American hunters could lick a hundred Sioux, and he furthermore said shet up and let him think. So he sot down on a kag and thunk for a spell, and then he says to me: “Ain’t Fat Bear’s village out acrost yonder about five mile?”

I said yes, and he said: “Well, look, you put on Big Nose’s blanket and git on the Yankton’s hoss and head for the village. The Sioux’ll think we’ve throwed Big Nose out to root for hisself; and whilst they’re chasin’ you the boat can git away up the river with Big Nose.”

I don’t suppose it matters what happens to me!„ I says bitterly.

Oh,” says he, “Fat Bear is yore friend and wunst you git in his village he won’t let the Sioux git you. You’ll have a good start before they can see you, on account of the bluffs there, and you ought to be able to beat ‘em into the village.”

I suppose it ain’t occurred to you at all that they’ll shott arrers at me all the way,” I says.

You know a Sioux cain’t shoot as good from a runnin’ hoss as a Comanche can,” he reassured me. “You jest keep three or four hundred yards ahead of ‘em, and I bet they won’t hit you hardly any at all.”