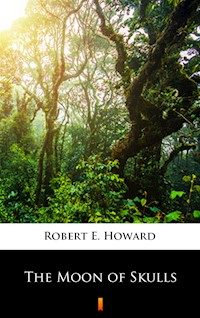 The Moon of Skulls ebook

A great black shadow lay across the land, cleaving the red flame of the red sunset. To the man who toiled up the jungle trail it loomed like a symbol of death and horror, a menace brooding and terrible, like the shadow of a stealthy assassin flung upon some candle-lit wall.

I. A MAN COMES SEEKING

II. THE PEOPLE OF THE STALKING DEATH

VI. THE SHATTERING OF THE SKULL

VII. THE FAITH OF SOLOMON

I. A MAN COMES SEEKING

A GREAT BLACK SHADOW lay across the land, cleaving the red flame of the red sunset. To the man who toiled up the jungle trail it loomed like a symbol of death and horror, a menace brooding and terrible, like the shadow of a stealthy assassin flung upon some candle-lit wall.

Yet It was only the shadow of the great crag which reared up in front of him, the first outpost of the grim foothills which were his goal. He halted a moment at its foot, staring upward where it rose blackly limned against me dying sun. He could have sworn that he caught the hint of a movement at the top, as he stared, hand shielding his eyes, but the fading glare dazzled him and he could not be sure. Was it a man who darted to cover? A man, or– ?

He shrugged his shoulders and fell to examining the rough trail which led up and over me brow of the crag. At first glance it seemed that only a mountain goat could scale it, but closer investigation showed numbers of finger holds drilled into the solid rock. It would be a task to try his powers to the utmost but he had not come a thousand miles to turn back now.

He dropped the large pouch He wore at his shoulder, and laid down the clumsy musket, retaining only his long rapier, dagger, and one of his pistols, these he strapped behind him, and without a backward glance over the darkening trail he had come, he started the long ascent.

He was a tall man, long-armed and iron-muscled, yet again and again he was forced to halt in his upward climb and rest for a moment. clinging like an ant to the precipitous face of the cliff. Night fell swiftly and the crag above him was a shadowy blur in which he was forced to feel wife his fingers, blindly, for the holes which served him as a precarious ladder.

Below him, me night noises of the tropical jungle broke forth, yet it appeared to him that even these sounds were subdued and hushed as though the great black hills looming above threw a spell of silence and fear even over the Jungle creatures.

On up he struggled, and now to make his way harder, the cliff bulged outward near its summit, and the strain on nerve and muscle became heart- breaking. Time and again a hold slipped and he escaped falling by a hair’s breadth. But every fibre in his lean hard body was perfectly co-ordinated, and his fingers were like steel talons with the grip of a vice. His progress grew slower and slower but on he went until at last he saw the cliffy brow splitting the stars a scant twenty feet above him.

And even as he looked, a vague bulk heaved into view, toppled on the edge and hurtled down toward him with a great rush of air about it. Flesh crawling, he flattened himself against the cliff’s face and felt a heavy blow against his shoulder. only a glancing blow. but even so it nearly tore him from his hold. and as he fought desperately to right himself, he heard a reverberating crash among the rocks far below. Cold sweat beading his brow. he looked up. Who –or what–had shoved that boulder over the cliff edge? He was brave, as the bones on many a battlefield could testify, but the thought of dying like a sheep, helpless and with no chance of resistance, turned his blood cold,

Then a wave of fury supplanted his fear and he renewed his climb with reckless speed. The expected second boulder did not come, however, and no living thing met his sight as he clambered up over the edge and leaped erect, sword flashing from its scabbard.

He stood upon a sort of plateau which debouched into a very broken hilly country some half mile to the west, The? crag he had just mounted jutted out from the rest of the heights like a sullen promontory, looming above the sea of waving foliage below, now dark and mysterious in the tropic night.

Silence ruled here in absolute Sovereignty. No breeze stirred the sombre depths below, and no footfall rustled amid the stunted bushes which cloaked the plateau, yet that boulder which had almost hurled the climber to his death had not fallen by chance. What beings moved among these grim hills? The tropical darkness fell about the lone wanderer like a heavy veil through which the yellow stars blinked evilly. The steams of the rotting jungle vegetation floated up to him as tangible as a thick fog, and making a wry face he strode away from the cliff, heading boldly across the plateau, sword in one hand and pistol in the other.

There was an uncomfortable feeling of being watched in the very air. The silence remained unbroken save for the soft swishing that marked the stranger’s cat-like tread through the tall upland grass, yet the man sensed that living things glided before and behind him and on each side. Whether man or beast trailed him he knew not, nor did he care over-much, for he was prepared to fight human or devil who barred his way. Occasionally he halted and glanced challengingly about him, but nothing met his eye except the shrubs which crouched like short dark ghosts about his trail, blended and blurred in the thick, hot darkness through which the very stars seemed to struggle, redly.

At last he came to the place where the plateau broke into me higher slopes and there he saw a clump of trees blocked out solidly in me lesser shadows. He approached warily, men halted as his gaze, growing somewhat accustomed to the darkness, made out a vague form among me sombre trunks which was not a part of them. He hesitated. The figure neither advanced nor fled. A dim form of silent menace, it lurked as if in wait. A brooding horror hung over that still cluster of trees.

The stranger advanced warily, blade extended. Closer. Straining his eyes for some hint of threatening motion. He decided that the figure was human but he was puzzled at its lack of movement. Then the reason became apparent– it was the corpse of a black man that stood among those trees, held erect by spears through his body, nailing him to the boles. One arm was extended in front of him, held in place along a great branch by a dagger through the wrist, the index finger straight as if the corpse pointed stiffly–back along the way the stranger had come, The meaning was obvious; that mute grim signpost could have but one significance–death lay beyond. The man who stood gazing upon that grisly warning rarely laughed, but now he allowed himself the luxury of a sardonic smile. A thousand miles of land and sea–ocean travel and jungle travel–and now they expected to turn him back with such mummery–whoever they were. He resisted the temptation to salute the corpse, as an action wanting in decorum, and pushed on boldly through the grove, half expecting an attack from the rear or an ambush. Nothing of the sort occurred, however, and emerging from the trees, he found himself at the foot of a rugged incline, the first of a series of slopes. He strode stolidly upward in the night, nor did he even pause to reflect how unusual his actions must have appeared to a sensible man. The average man would have camped at the foot of the crag and waited for morning before even attempting to scale the cliffs. But this was no ordinary man. Once his objective was in sight, he followed the straightest line to it, without a thought of obstacles, whether day or night. What was to be done, must be done. He had reached the outposts of file kingdom of fear at dusk, and invading its inmost recesses by night seemed to follow as a matter of course.

As he went up the boulder-strewn slopes the moon rose, lending its air of illusion, and in its light the broken bills ahead loomed up like the black spires of wizards’ castles. He kept his eyes fixed on the dim trail he was following, for he knew not when another boulder might come hurt~ ling down the inclines. He expected an attack of any sort and, naturally, it was the unexpected which really happened.

Suddenly from behind a great rock stepped a man, an ebony giant in the pale moonlight, a long spear blade gleaming silver in his hand, his headpiece of ostrich plumes floating above him like a white cloud. He lifted the spear in a ponderous salute, and spoke in the dialect of the river-tribes: “This is not the white man’s land. Who is my white brother In his own kraal and why does he come into the Land of Skulls?”

“My name is Solomon Kane.” the white man answered in the same language. “I seek the vampire queen of Negari.”

“Few seek. Fewer find. None return,” answered the other cryptically.

“You bear a long dagger in your right hand.