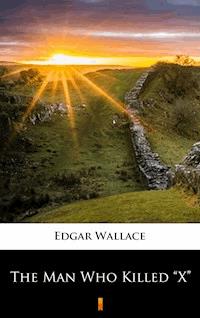 The Man Who Killed „X” ebook

This novella was created by Edgar Wallace, a famous British author of mystery genre. Best remembered for penning the screenplay for the classic film „King Kong”, he was an astoundingly popular luminary in the action-adventure genre in the early twentieth century. „The Man Who Killed „X"” is a story packed with intrigue, treachery, assassinations, and machinations, and it highlights Wallace’s unmatched skill in setting a pulse-pounding pace. It’s all great fun and Wallace keeps the action moving along swiftly, as he always did. Wonderful entertainment and highly entertaining. If you haven’t discovered the joys of Wallace’s thrillers there is a good place to start. Highly recommended.

II. THE VOICE IN THE NIGHT

IV. A TILT WITH MAY

V. AN ADVENTURE ON THE CÔTE D’AZURE

VI. THE WAY OF DENVER MAY

I KNEW a lady once named Denver May–a fine, handsome doll of a woman with china-blue eyes, peach-like cheeks, and hair of gold, which was just getting a little bit old and had taken on a brown lacquer through which the gold shone.

I met her once professionally, I have spoken to her in a friendly way more than once, and the last time I spoke to her a dear friend of hers named Leggatt waited for me in the dark corridor of my hotel at 3 a.m. on a winter morning and tried to knife me with a long Italian stiletto which proved to be a veritable Fraggecci.

He did not intend comforting my dying moments with the knowledge that he it was who had done this thing, for he wore over his face a portion of a lady’s silk stocking, in which, with a practised hand, he had cut two eye-holes. I have often wondered whether that stocking was May’s, but the speculation is a fairly idle one.

Anyway, Leggatt misjudged the distance, and I gave him two–one to start him falling, and the other, en route, to keep him fallen. I believe I also kicked him a little when he was down, for I am a sportsman, and had no desire to die in a temperance hotel, to which the exigencies of my profession had brought me.

The last time I saw Denver May she was smiling sweetly at a wise old man in a red silk wrap and a white wig. He wasn’t smiling. His lined mouth was drooped, and two deep furrows ran down either side of his face. He looked at her over his big glasses and said with almost pathetic sadness:

“As to the woman, she is a dangerous enemy to society. What is known of her?”

I stepped up to the witness-stand and said:

“She is a blackmailer, and because of her many men have committed suicide.”

That is all I said, and May smiled at me from the big yellow dock as though I had paid her the most exquisite compliment.

The old man in the white wig shook his head helplessly.

“A danger to society,” he repeated. “You, May Clement Schaffer, will be kept in penal servitude for fifteen years.”

She went down from the dock with that little smile, but outside in the high, marbled vestibule, Leggatt sat crouched on a seat crying like a child.

I felt very sorry for Leggatt in a way. I realised how lonely he must be without the woman whose fortune he had shared–he on one side of the prison gate and she on the other.

In justice to myself, let it be said that I did my best to put them both on the right side–which is the inside.

But in the case of Leggatt there had been some picturesque and scientific perjury at the preliminary magisterial inquiry, and he had not gone for trial.

And here was Leggatt blubbering like a child. How sad! Did I laugh? I did.

He looked at me with his lamps at danger.

Yes, he was sobbing his heart out, just as old Alderman Gollington, of Manchester, had sobbed when the pair of them stripped him of his last dollar on the threat of exposing a sin nearly half a century old; so he had gone sobbing, that old man, to the home they had wrecked, and hanged himself in the wine-cellar.

Mrs. Laurie-Franze, of Philadelphia, had wept with even greater passion when Denver May and her colleague had confronted her with the bundle of letters which meant separation from the husband she loved and the two little children she adored. She had pawned her jewels to satisfy May; she had robbed her husband and placed herself still further in their hands. She came to the end of her possibilities, and May with the cherub face, wanted more, Leggatt backing her up.

To-day Mrs. Laurie-Franze thinks she is a snake-charmer; she gives the attendants little trouble, except now and again, when she is very terrible indeed, and it takes six nurses to get her to the padded ward.

Laugh? I would laugh to see Leggatt in hell!

“I’ll fix you,” he said again between sniffles.

“I shall be doing a little fixing myself,” I said. “Look out for me.”

Did he try? I think he did. But a good blackmailer is a specialist. Exponents of laryngotomy are, as a rule, indifferent chiropodists, and criminals, who terrorise by threats are most indifferent assassins. So I found.

He handed me all the lethal equipment he could find. He brought to his assistance a man named Badger–James Badger, commonly called “Talking Jimmy.”

I took mine to the tiny laboratory at the top of my home, and fed some mice with scraps of the sweet stuff.

And those mice died; they died very quickly. My doctor friends tell me that it is not in the public interest that I should tell you the poison, because it is one which is not very well known except to opticians. It is nothing so common as atropine.

I tied up the rest of the sweets, type-wrote an address, and mailed the box to Leggatt with a card inscribed:

but I fancy he did not eat them. That may have been “Talking Jimmy’s” idea, for, in addition to being a glib spinner of tales, this James was a murderer, as I know.

And suppose you receive a parcel with a label of a well-known publisher, would you think they were books? I guess you would. But do books say “tick-tick-tick,” even when they aren’t paid for? I dropped my “books” into a pail of water and sent for the explosive expert from the War Office.

I sent for Big Bill Brady, and he came sort of sideways, ready to bolt.

“Bill,” I said, “I pulled you out of bad trouble last fall, not because I love you or was affected by the tears of the lady who calls herself Mrs. Bill, but just because I was out shark-fishing and hadn’t the time to waste on pike.”

Bill asked Providence to destroy his eyesight and admitted the truth of my words.

“Mr. Tyndall,” said Bill earnestly, “he’s an American and uses fire-weapons; he’s got pals that use fire-weapons. I’ll do my best for you, but unless I get him–so to speak–tata-tatey, there will be no performance.”

There was no performance–not the right kind of performance. The gentlemen employed their “fire-weapons” to such an effect that Bill has been drawing an allowance from me ever since on the score of being “temporarily incapacitated.”

This was the position on June 17th when I read an announcement in the Times:

Leggatt. After a short illness at Monte Carlo. George William Leggatt, of Chicago and London.

Upon a distant shore he fell, Away from home and kin; We’ll never see another lad So good a friend as him.

The last words from his lips did fall Upon that summer’s day, And this is what his faint voice said: “Good-bye, my Denver May!”

The invitation to the Editors of the Poet’s Corner of American journalism was affecting. It affected me. A month later I discovered that the distressing news had affected one of whose existence I had been in ignorance.

A man made an appointment with me at my office, and I had the bad luck to keep it.

I always prefer making an appointment with a man, because I know just how to miss it and have plenty of time to invent an oh-cruel-fate lie to explain my absence. I said I’d see this lad at one and a-half, and at one and a-half I was keeping an appointment with a devilled sole, a teeny-weeny bottle of Mumm, and another lady at Boriani’s in the Haymarket.

I went back to the office at four o’ the clock, and there, sitting glum and stolid before the stove, burning my precious current was the appointee.

I looked at him sternly, then at my watch. I didn’t know which to blame most.

“I thought I said half-past one,” I remarked.