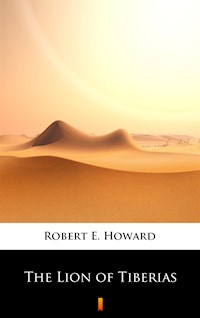 The Lion of Tiberias ebook

The battle in the meadowlands of the Euphrates was over, but not the slaughter. On that bloody field where the Caliph of Bagdad and his Turkish allies had broken the onrushing power of Doubeys ibn Sadaka of Hilla and the desert, the steel-clad bodies lay strewn like the drift of a storm. The great canal men called the Nile, which connected the Euphrates with the distant Tigris, was choked with the bodies of the tribesmen, and survivors were panting in flight toward the white walls of Hilla which shimmered in the distance above the placid waters of the nearer river.

THE BATTLE in the meadowlands of the Euphrates was over, but not the slaughter. On that bloody field where the Caliph of Bagdad and his Turkish allies had broken the onrushing power of Doubeys ibn Sadaka of Hilla and the desert, the steel-clad bodies lay strewn like the drift of a storm. The great canal men called the Nile, which connected the Euphrates with the distant Tigris, was choked with the bodies of the tribesmen, and survivors were panting in flight toward the white walls of Hilla which shimmered in the distance above the placid waters of the nearer river. Behind them the mailed hawks, the Seljuks, rode down the fleeing, cutting the fugitives from their saddles. The glittering dream of the Arab emir had ended in a storm of blood and steel, and his spurs struck blood as he rode for the distant river.

Yet at one spot in the littered field the fight still swirled and eddied, where the emir’s favorite son, Achmet, a slender lad of seventeen or eighteen, stood at bay with one companion. The mailed riders swooped in, struck and reined back, yelling in baffled rage before the lashing of the great sword in this man’s hands. His was a figure alien and incongruous, his red mane contrasting with the black locks about him no less than his dusty gray mail contrasted with the plumed burnished headpieces and silvered hauberks of the slayers. He was tall and powerful, with a wolfish hardness of limbs and frame that his mail could not conceal. His dark, scarred face was moody, his blue eyes cold and hard as the blue steel whereof Rhineland gnomes forge swords for heroes in northern forests.

Little of softness had there been in John Norwald’s life. Son of a house ruined by the Norman conquest, this descendant of feudal thanes had only memories of wattle-thatched huts and the hard life of a man-at-arms, serving for poor hire barons he hated. Born in north England, the ancient Danelagh, long settled by blue-eyed vikings, his blood was neither Saxon nor Norman, but Danish, and the grim unbreakable strength of the blue North was his. From each stroke of life that felled him, he rose fiercer and more unrelenting. He had not found existence easier in his long drift East which led him into the service of Sir William de Montserrat, seneschal of a castle on the frontier beyond Jordan.

In all his thirty years, John Norwald remembered but one kindly act, one deed of mercy; wherefore he now faced a whole host, desperate fury nerving his iron arms.

It had been Achmet’s first raid, whereby his riders had trapped de Montserrat and a handful of retainers. The boy had not shrunk from the swordplay, but the savagery that butchers fallen foes was not his. Writhing in the bloody dust, stunned and half-dead, John Norwald had dimly seen the lifted scimitar thrust aside by a slender arm, and the face of the youth bending above him, the dark eyes filled with tears of pity.

Too gentle for the age and his manner of life, Achmet had made his astounded warriors take up the wounded Frank and bring him with them. And in the weeks that passed while Norwald’s wounds healed, he lay in Achmet’s tent by an oasis of the Asad tribes, tended by the lad’s own hakim. When he could ride again, Achmet had brought him to Hilla. Doubeys ibn Sadaka always tried to humor his son’s whims, and now, though muttering pious horror in his beard, he granted Norwald his life. Nor did he regret it, for in the grim Englishman he found a fighting-man worth any three of his own hawks.

John Norwald felt no tugging of loyalty toward de Montserrat, who had fled out of the ambush leaving him in the hands of the Moslems, nor toward the race at whose hands he had had only hard knocks all his life. Among the Arabs he found an environment congenial to his moody, ferocious nature, and he plunged into the turmoil of desert feuds, forays and border wars as if he had been born under a Bedouin black felt tent instead of a Yorkshire thatch. Now, with the failure of ibn Sadaka’s thrust at Bagdad and sovereignty, the Englishman found himself once more hemmed in by chanting foes, mad with the tang of blood. About him and his youthful comrade swirled the wild riders of Mosul; the mailed hawks of Wasit and Bassorah, whose lord, Zenghi Imad ed din, had that day out-maneuvered ibn Sadaka and slashed his shining host to pieces.

On foot among the bodies of their warriors, their backs to a wall of dead horses and men, Achmet and John Norwald beat back the onslaught. A heron- feathered emir reined in his Turkoman steed, yelling his war-cry, his house- troops swirling in behind him.

“Back, boy; leave him to me!” grunted the Englishman, thrusting Achmet behind him. The slashing scimitar struck blue sparks from his basinet and his great sword dashed the Seljuk dead from his saddle. Bestriding the chieftain’s body, the giant Frank lashed up at the shrieking swordsmen who spurred in, leaning from their saddles to swing their blades. The curved sabers shivered on his shield and armor, and his long sword crashed through bucklers, breastplates, and helmets, cleaving flesh and splintering bones, littering corpses at his iron-sheathed feet. Panting and howling the survivors reined back.

Then a roaring voice made them glance quickly about, and they fell back as a tall, strongly built horseman rode through them and drew rein before the grim Frank and his slender companion. John Norwald for the first time stood face to face with Zenghi esh Shami, Imad ed din, governor of Wasit and warden of Basorah, whom men called the Lion of Tiberias, because of his exploits at the siege of Tiberias.

The Englishman noted the breadth of the mighty steel-clad shoulders, the grip of the powerful hands on rein and sword-hilt; the blazing magnetic blue eyes, setting off the ruthless lines of the dark face. Under the thin black lines of the mustaches the wide lips smiled, but it was the merciless grin of the hunting panther.

Zenghi spoke and there was at the back of his powerful voice a hint of mockery or gargantuan mirth that rose above wrath and slaughter.

“Who are these paladins that they stand among their prey like tigers in their den, and none is found to go against them? Is it Rustem whose heel is on the necks of my emirs–or only a renegade Nazarene? And the other, by Allah, unless I am mad, it is the cub of the desert wolf! Are you not Achmet ibn Doubeys?”

It was Achmet who answered; for Norwald maintained a grim silence, watching the Turk through slit eyes, fingers locked on his bloody hilt.

“It is so, Zenghi esh Shami,” answered the youth proudly, “and this is my brother at arms, John Norwald. Bid your wolves ride on, oh prince. Many of them have fallen. More shall fall before their steel tastes our hearts.”

Zenghi shrugged his mighty shoulders, in the grip of the mocking devil that lurks at the heart of all the sons of high Asia.

“Lay down your weapons, wolf-cub and Frank. I swear by the honor of my clan, no sword shall touch you.”

“I trust him not,” growled John Norwald. “Let him come a pace nearer and I’ll take him to Hell with us.”

“Nay,” answered Achmet. “The prince keeps his word. Lay down your sword, my brother. We have done all men might do. My father the emir will ransom us.”

He tossed down his scimitar with a boyish sigh of unashamed relief, and Norwald grudgingly laid down his broadsword.

“I had rather sheathe it in his body,” he growled.