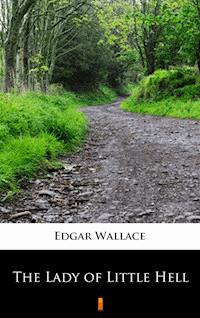 The Lady of Little Hell ebook

One of the most prolific writers of the twentieth century, Edgar Wallace was an immensely popular author, who created exciting thrillers spiced with tales of treacherous crooks and hard-boiled detectives. These were largely adventure narratives with elements of crime or mystery, and usually combined a bombastic sensationalism with hammy violence. In this exciting page-turner, originally published in 1929, from the undisputed „King of Thrillers”, Edgar Wallace, we see the brave women and sturdy men, much rushing to and for, and a dramatic climax. During the 1920’s and 30’s, it was said that one of every four books read in England was written by Wallace, who ultimately produced 173 books and 17 plays.

1. THE LADY OF LITTLE HELL (AN END OF THE WAR STORY)

2. THE GIRL FROM THE ETHER

5. THE CROSS OF THE THIEF

6. BILL AND THE TAPPERS

8. THE CUSTODY OF THE CHILD

1. THE LADY OF LITTLE HELL (AN END OF THE WAR STORY)

I. THE WOMAN IN THE VEIL

A DOZEN boisterous voices greeted the young soldier who stood smiling in the big vestibule of Lord Mortimer’s house in Grosvenor Square.

He had come through the swing doors unannounced, a fine stalwart figure of youth in the uniform of the Flying Corps, and was handing his British warm to a servant when his aunt hailed him from the head of the majestic stairway.

Lady Mortimer came fluttering down the stairs to greet him, and there was no mistaking the welcome in her face.

“My dear boy, I am so glad you could come. When we heard of the tremendous work the Flying Corps was doing we despaired of seeing you.”

“I told the skipper it was your birthday party, auntie, and he gave me leave,” laughed Tom Broadwood as he kissed her.

They clustered round him, a noisy, laughing, admiring throng of boys and girls he had known from their pinafore days. Eager young faces lifted to his, a dozen dance-cards were thrust at him, with base and reckless invitation to scratch out any initials he wished and substitute his own. He waved them off in mock terror and taking his aunt’s arm mounted to the big ball-room.

Tom Broadwood was a child of fortune, unspoilt. An orphan and the heir of Morgan Broadwood’s millions, he had left Oxford and joined up at the first hint of war. He had served as a private at the defence of Ypres, and later had his commission, first as an officer in a Lancashire regiment and later in the Corps of corps.

“I wanted to talk with you, Aunt Selina,” he said, when at last he had piloted her to the deserted library.

“You have made me very unpopular with quite a number of people who want to meet you,” she chided him.

Lady Mortimer was a woman of forty-five, who retained much of the beauty which Sargent had rendered imperishable in his Academy picture of 1901. She looked down at Tom as he sank into a deep chair and handed him a silver cigarette box.

“Selina,” he said–he never called her “aunt” when they were alone–“I wanted to tell you that I have fixed up things with my solicitors, so that if anything happens to me in France my money and property go to your two boys; the work I am doing now is particularly dangerous.”

“More than usual?” she asked anxiously.

“Usually I am dropped from an aeroplane; sometimes I take my own machine, but that is for short work. Next week I am going over on rather a hazardous mission. That was one of the reasons I came home to see you. I want to put my estate in trim for your boys.”

“Please God they will never inherit the money,” she said quietly. “I look forward to the day when you will have a son of your own.”

“That sounds queer to me,” he laughed. “I’ve never met the girl, and anyway I have to tell you this: I have asked Gretton–he’s my solicitor–to come along and see you when I’ve gone and give you a full account of my interests. You are the only relative I have in the world.”

She shook her head.

“I’m not,” she smiled mischievously; “that’s the fun of it–and that is why I wanted to parade you around. You have an unique opportunity of meeting a second cousin.”

He pulled a little face.

“Is it masculine or feminine?”

“Very much feminine! She’s unique–a product of the century.”

“O lor’!!” exclaimed Tom dismally; “that means she’s neurotic or drinks cocktails and admires Morris dances, and has red hair and a soul!”

“You shall see. She’s the daughter of a cousin–Tom Marsh was in the Consular service and poor–lost all his money in South African Mines and developed a taste for art. The girl was educated in Paris, Munich, and some other weird place, and I’m sure would be the most intelligent being in the world if–”

“Well, you shall judge. I confess I don’t like sporty girls or doggy girls or Amazon girls, and I do like them to be feminine–but the droopy, snoopy girl who must wear a dressing robe that harmonises with the bath mat–”

“Oh, she’s that kind, is she? Where did she spring from?” asked Tom. “I don’t seem to have heard of her before.”

“America. She’s Californian by preferences though British by birth.”

“You pique my curiosity. How does she live if she’s so poor?”

“Heaven knows–that is a mystery. She has a suite at the Ritz-Carlton, she travels in style, dresses like a queen–and Tom Marsh left exactly three hundred pounds to meet ten thousand pounds worth of liabilities.”

“Lead me to this financial genius,” he said.

So Tom Broadwood came to the presence of Dawn Marsh in a spirit of amused interest. He saw her and his amusement died–but his interest multiplied at an amazing rate.

She sat on a large crimson settee in one of the alcoves of the ball- room annexe. A young man, faultlessly attired, sat by her side, but Tom had no eyes but for the girl. She was, he judged, above medium height. What she wore he could never describe. It was a delicate material of creamy white, and there were touches of black and gold on the dress and a bandeau of black and gold in her hair. He classified her peculiar beauty by his elastic and limited standard as something between a Gibson and a Kirchner girl. The face was healthily and delicately pale, the eyes big and set wide apart, the lips full and crimson, the nose and chin well moulded.

She looked up at him steadfastly and with a certain interest which was childlike in its unfeigned curiosity.

“This is your second cousin, Dawn–Torn Broadwood,” said Lady Mortimer, and she raised her coal-black eyebrows with a little smile of pleasure.

“I have heard of you–the slayer of Flying Men,” she said. Her voice was a soft contralto, distinct despite its drawl. “Sit down, Aunt Selina.”

“I must go–I have been neglecting everybody shamefully. I will see you, Tom, before you leave.”

The apparition of this girl had momentarily silenced him. He thought he had never seen anything so lovely.

“Sit down, won’t you, Tom,” she invited; “you know Count Stopl–don’t fight, please; the count is Swedish and we aren’t at war with Sweden,” she laughed.

The man, who had risen, smiled politely, but it struck Tom that he was not pleased. He was young and decidedly good-looking, though the trim moustache was set over a square jaw and hid lips which, were they exposed might have detracted something from his pleasing appearance.

“Miss Marsh is joking, always joking–but always charming,” he said, with a click of heels; “for myself I never can fathom the gracious Miss Marsh, though often I have had the surpassing honour of meeting her.”

“The count is terribly curious,” she said, with a sidelong smile at her companion, “and yet is so polite. Confess, count, you have been questioning and cross-questioning me for two dances.”

“My dear lady!” said the shocked nobleman; “never! I would die before such a rudeness! Is it wonderful, Mr. Broadwood, that all mademoiselle’s interests are of first importance to her friends?”–he shrugged his shoulders despairingly–“I but ask you if you ride, if you walk, if you play golf or tennis?”

“I am so sorry, count,” she interrupted; “you take me so seriously, and really I am not a very serious person.”

She turned to Tom.

“The count was so good to me on the voyage. I am sure if we had met a U-boat he would have vouched for my respectability.”

The count smiled and bowed.

“If I have your permission I will take my leave,” he said; “I have arranged to meet a compatriot. Does mademoiselle leave for New York soon?”

“To-morrow,” said the girl, “and if you ever come to California won’t you come and see me?”

“I will give myself that pleasure and happiness.”

She watched him as he retired and there was neither regret nor relief in that steady gaze.

“Now, cousin,” she said, turning suddenly to the young man, “promise me you won’t ask me if I ride or walk or box.”

“I can promise you that,” said Tom.

“And confess that you have never heard of me before to-night,” she challenged.

“It is unpardonable of me,” said Tom, “but I never have.”