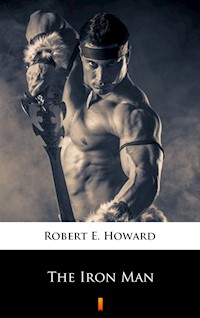 The Iron Man has fought since time immemorial -- with but one thought in mind -- to get to his foe and crush him. The centuries, the costumes, the weapons are different. The object is the same. The gore and savagery of Howard’s tales of the ring is little removed from those exploits of Conan and Kull and Bran Mak Morn.It is common knowledge that Robert E. Howard was a boxing enthusiast, and his fellow author H. P. Lovecraft tied Howard’s interest in sports directly to his „love of primitive conflict and strength.."In The Iron Man are three of Howard’s best tales of the ring -- certainly tales of primitive conflict and strength which are collected in book form for the first time.

5. THE ROLL OF THE IRON MEN

A CANNON-BALL for a left and a thunderbolt for a right! A granite jaw, and chilled steel body! The ferocity of a tiger, and the greatest fighting heart that ever beat in an iron-ribbed breast! That was Mike Brennon, heavyweight contender.

Long before the sports writers ever heard the name of Brennon, I sat in the “athletic tent” of a carnival performing in a small Nevada town, g1ng at the antics of the barker, who was volubly offering fifty dollars to anyone who could stay four rounds with “Young Firpo, the California Assassin, champeen of Los Angeles and the East Indies!” Young Firpo, a huge hairy fellow, with the bulging muscles of a weight-lifter and whose real name was doubtless Leary, stood by with a bored and contemptuous expression on his heavy features. This was an old game to him.

“Now, friends,” shouted the spieler, “is they any young man here what wants to risk his life in this here ring? Remember, the management ain’t responsible for life or limb! But if anybody’ll git in here at his own risk–”

I saw a rough-looking fellow start up–one of the usual “plants” secretly connected with the show, of course–but at that moment the crowd set up a yell, “Brennon! Brennon! Go on, Mike!”

At last a young fellow rose from his seat, and with an embarrassed grin, vaulted over the ropes. The “plant” hesitated–Young Firpo evinced some interest, and from the hawk-like manner in which the barker eyed the newcomer, and from the roar of the crowd, I knew that he was on the “up-and-up”–a local boy, in other words.

“You a professional boxer?” asked the barker.

“I’ve fought some here, and in other places,” answered Brennon. “But you said you barred no one.”

“We don’t,” grunted the showman, noting the difference in the sizes of the fighters.

While the usual rigmarole of argument was gone through, I wondered how the carnival men intended saving their money if the boy happened to be too good for their man. The ring was set in the middle of the tent; the dressing-rooms were in another part. There was no curtain across the back of the ring where the local fighter could be pressed to receive a blackjack blow from the confederate behind the curtain.

Brennon, after a short trip to the dressing-room, climbed into the ring and was given a wild ovation. He was a finely built lad, six feet one in height, slim-waisted and tapering of limb, with remarkably broad shoulders and heavy arms. Dark, with narrow gray eyes, and a shock of black hair falling over a low, broad forehead, his was the true fighting face– broad across the cheekbones–with thin lips and a firm jaw. His long, smooth muscles rippled as he moved with the ease of a huge tiger. Opposed to him Young Firpo looked sluggish and ape-like.

Their weights were announced, Brennon 189, Young Firpo 191. The crowd hissed; anyone could see that the carnival boxed weighed at least 210.

The battle was short, fierce and sensational, and with a bedlam-like ending. At the gong Brennon sprang from his corner, coming in wide open, like a bar-room brawler. Young Firpo met him with a hard left hook to the chin, stopping him in his tracks. Brennon staggered, and the carnival boxer swung his right flush to the jaw–a terrific blow which, strangely enough, did not seem to worry Brennon as had the other. He shook his head and plunged in again, but as he did so, his foe drew back the deadly left and crashed it once more to his jaw. Brennon dropped like a log, face first. The crowd was frenzied. The barker, who was also referee, began counting swiftly, Young Firpo standing directly over the fallen warrior.

At “five!” Brennon had not twitched. At “seven!” he stirred and began making aimless motions. At “eight!” he reeled to his knees, and his reddened, dazed eyes fixed themselves on his conqueror. Instantly they blazed with the fury of the killer. As the spieler opened his mouth to say “ten!” Brennon reeled up in a blast of breath-taking ferocity that stunned the crowd.

Young Firpo, too, seemed stunned. Face whitening, he began a hurried retreat. But Brennon was after him like a blood-crazed tiger, and before the carnival fighter could lift his hands, Brennon’s wide-looping left smashed under his heart and a sweeping right found his chin, crashing him face down on the canvas with a force that shook the ring.

The astounded barker mechanically began counting, but Brennon, moving like a man in a trance, pushed him away and stooping, tore the glove from Young Firpo’s limp left hand. Removing something therefrom, held it up to the crowd. It was a heavy iron affair, resembling brass knuckles, and known in the parlance of the ring as a knuckle-duster. I gasped. No wonder Young Firpo had been unnerved when his victim rose! That iron-laden glove crashing twice against Brennon’s jaw should have shattered the bone, yet he had been able to rise within ten seconds and finish his man with two blows!

Now all was bedlam. The barker tried to snatch the knuckle-duster from Brennon, and one of Young Firpo’s seconds rushed across the ring and struck at the winner. The crowd, sensing injustice to their favorite, surged into the ring with the avowed intention of wrecking the show! As I made my way to the nearest exit I saw an infuriated townsman swing up a chair to strike the still prostrate Young Firpo. Brennon sprang forward and caught the blow on his own shoulder, going to his knees under it; then I was outside and as I walked away, laughing, I still heard the turmoil and the shouts of the policemen.

Some time later I saw Brennon fight again, in a small club on the West Coast. His opponent was a second-rater named Mulcahy. During the fight my old interest in Brennon was renewed. With incredible stamina, with as terrific a punch as I ever saw, it was evident his one failing was an absolute lack of science. Mulcahy, though strong and tough, was a mere dub, yet he clearly outboxed Brennon for nearly two rounds, and hit him with everything he had, though his best blows did not even make the dark-browed lad wince. With the second round a half minute to go, one of Brennon’s sweeping swings landed and the fight was over.

I thought to myself: that lad looks like a champion, but he fights like a longshoreman, but I won’t attach too much importance to that. Many a fighter stumbles through life and never learns anything, simply because of an ignorant or negligent manager.

I went to Brennon’s dressing-room and spoke to him.

“My name is Steve Amber. I’ve seen you fight a couple of times.”