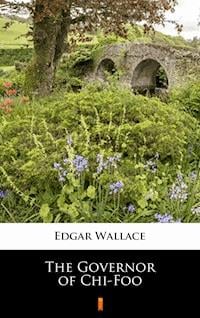 The Governor of Chi-Foo ebook

Edgar Wallace was an English novelist, journalist and playwright, who was an enormously popular writer of detective, suspense stories, and practically invented the modern „thriller”. His popularity at the time was comparable to that of Charles Dickens – one of Wallace’s publishers claimed that a quarter of all books read in England were written by him. „The Governor of Chi-Foo” is a rare short story collection, long out of print which contains 16 thrilling stories: „The Witney Road”, „Mother o’ Mine”, „The King’s Brahm”, „The Greek Poropolous”, „The Treasure of the Kalahari” and others. An exiting book full of intrigue and mystery, this book is a must-read for all fans of thrilling crime fiction. Edgar Wallace provides a thrill of another sort!

I. THE GOVERNOR OF CHI-FOO

III. ON THE WITNEY ROAD

VII. A TRYST WITH GHOSTS

I. THE GOVERNOR OF CHI-FOO

IN Chi-Foo, as in the Forbidden City, the phrase Iang-knei-tsi, which means “foreign devil,” was one seldom employed, for Colin” Hemel, who in the days of the Manchu dynasty had the august and godlike ear of the Daughter of Heaven, was as terribly quick to punish now that he served a democratic president. As for Chi-Foo, Augustus Verrill sat there, and, brute as he was, he had still enough of the white man in him to resent Iang-knei-tsi.

So it was Iang-ren that people said, meaning (so we persuade ourselves) “honorable foreign.”

What they call foreigners in Chi-Foo nowadays I do not know, for Augustus Verrill is not there, and for this reason.

On a bright spring morning the interested but fearful people of Chi-Foo, straining their ears for the sound, were rewarded with the word they awaited. It was the word “shul!” which means “kill!”

A Chinaman with a thick padded coat of blue, his hands concealed in his sleeves, was picking a delicate way along the untidy street which leads to the Gate of a Thousands Regrets, when he heard the guttural whisper, and saw the crazy door of a house come flying outward.

He spun round on the heel of his felt boot, his eyes blinking in the strong sunlight, his lean brown face tense, and a grin of expectancy showing the white even rim of his teeth.

The blue-coated Chinaman squared his elbow and a straight splinter of fire leaped from his hand.

The dog-faced man, with a grimace like one who swallows a noxious draught, went lurching against the white wall of the house, leaving it smeared and disfigured when he finally collapsed to his knees.

This was against all arrangement, for the Devil in Blue had left the inn outside the city gates, and in a second’s space the Street of Going Forth was deserted save for the bluecoated Chinaman and the gurgling thing that was huddled in the mud by the wall. The blue Chinaman looked down, frowning.

He took a white handkerchief from the fold of his sleeve and blew his nose, never removing his eyes from the dying man.

“Better you than me, by gad,” he said earnestly, “from all over the world to die like a pig in a wallow of mud? That’s no death for a gentleman.”

All the time he spoke aloud in English, yet so cleverly was he made up, so scrupulous was the attention he had devoted to his toilette and the et ceteras of his character that none in the city of Chi-Foo knew him for any other than Li Wan, a small-piece mandarin charged by the Daughter of Heaven to inquire into certain irregularities at the Court of Mandarin Wen-Ho Hong, Governor of the Province of Chi-Foo.

He waited until the man was dead, then looked up and down the deserted street. The Gate of a Thousand Regrets was closed, though it was long before sunrise. The Captain of the Guard would explain the unusual happening, would also swear by his domestic gods that he saw no sight of brawling and heard no sound of shot.

At the other end of the street a little knot of small boys had gathered with folded arms, frowning curiously, and relaxing their attitude from time to time to point out, with their thin little arms stretched stiffly, the tragic consequences of the attack.

These melted as the man in blue, twirling his long-barreled Browning, walked slowly back the way he had come. The bazaar was alive with people–the bazaar which ran to the right from the street end to the very gates of the Yamen.

But even this crowd, silent and watchful, stepped on one side to give him a free passage. Once he heard a half-hearted “Shul!” and his quick ears caught the rustle of movement which is so ominous a sequence to such an urgent suggestion. Then a jagged stone whistled past his ear, and he heard the “Ugh!” of the man who threw it.

He was half-way to the Yamen, and did not turn until another stone caught him in the middle of his well-padded back.

He whipped round as the thrower was stooping for further ammunition, and covered him.

“Oh, man,” said he, in the queer dialect of the river province, “I wish you a safe journey.”

The thrower dropped his stone as if he had been shot.

“Come nearer to me,” commanded the Blue Man, and the coolie shuffled forward through the mud, staring without expression into the gray eyes of the other.

“There is a wind on the river tonight,” said the man with the pistol.

“I sail my sampan in the wind,” stammered the other; and then, “Let me die if I have offended your honorable body.”

“Walk behind me, brother,” said the blue Chinaman, and continued on his way. The trembling coolie who had followed him did not see him grin, or know that the Devil in Blue was armed. He had used the password of the Mournful Owls–not for the first time–and here was a member of the secret society humbly serving him, though Chung-Win-Ti, the local head of the Order, lay stiffening in the mud not a stone’s throw away.

The man in blue passed hastily through the gates of the Yamen, and entered the outer Court of Justice.

He swept aside an imploring secretary full of murmurs about the Mandarin’s indisposition, and came without ceremony to the presence of the Governor.

Wen-Ho-Hong looked up as the Blue Man entered, and started.

“It is an honorable happening that you condescend to come to my hovel,” he murmured. “Does your graciousness desire something?”

“My miserable carcass has come,” said the Blue Man, a snarl on his lips, “despite the fact that your honorable assassins endeavored to send me on the journey; also, my noble prince, I fear that I have villainously slain an honorable servant of yours, Chung-Win-Ti, in the Street by the Gate.”

The aesthetic face of the other did not so much as twitch.

“If you had brought your nobleness with the other honorable members of your Commission,” he said gently, “I, unworthy as I am, would have sent forth my miserable guard to bring your felicity to the Yamen.”

For a moment they sat, two Chinamen with shaven heads and plaited queues, their hands upon their knees, watching one another; then the Governor spoke:

“Will your lordship deign to enter my poverty-stricken inner room?”

The stranger hesitated a moment, then rose without a word and followed the Mandarin through the great lacquered door, which the Mandarin closed carefully behind him.

“A few slight irregularities, Augustus,” he said slowly, between his puffs. “Robbery of troops’ pay–”

“That’s nothing,” said the other lightly. “Betrayal of the Government to the rebels–membership of a secret society.”

“That’s nothing either,” snarled the Mandarin. “Isn’t there anything else?”

Colin Hemel looked up at the beautiful carved ceiling of the sanctuary.

“When we were very young men,” he said slowly, “long before you went Chinese–I suppose the fact that we were both born in the land makes our jobs natural–there was a girl at Shanghai; do you remember?”

The other licked his lips.

“I was rather fond of her, and so were you,” Colin went on, “and when Li Hang took you up, made you his English secretary, and finally gave you a province to rule, I was jolly glad–it sort of left the way open to me.”

The other smiled faintly, but Colin seemed not to see him.

“I heard all about your wonderful success at Pekin, how you had pleased the Daughter of Heaven, and your fine new appointment–the only American to hold such a job, aren’t you?”

“I used to talk about it to her, and she was a little wistful. One day she disappeared.”

The man before him averted his gaze.

“She disappeared,” repeated the Secret Service man, blowing out a cloud of smoke, “and she came here.”

There was a dead silence, which the Mandarin broke.