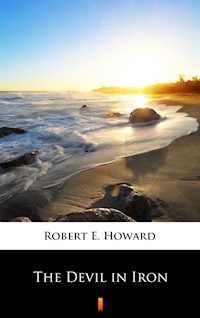 The Devil in Iron ebook

The fisherman loosened his knife in its scabbard. The gesture was instinctive, for what he feared was nothing a knife could slay, not even the saw-edged crescent blade of the Yuetshi that could disembowel a man with an upward stroke. Neither man nor beast threatened him in the solitude which brooded over the castellated isle of Xapur.

THE fisherman loosened his knife in its scabbard. The gesture was instinctive, for what he feared was nothing a knife could slay, not even the saw-edged crescent blade of the Yuetshi that could disembowel a man with an upward stroke. Neither man nor beast threatened him in the solitude which brooded over the castellated isle of Xapur.

He had climbed the cliffs, passed through the jungle that bordered them, and now stood surrounded by evidences of a vanished state. Broken columns glimmered among the trees, the straggling lines of crumbling walls meandered off into the shadows, and under his feet were broad paves, cracked and bowed by roots growing beneath.

The fisherman was typical of his race, that strange people whose origin is lost in the gray dawn of the past, and who have dwelt in their rude fishing huts along the southern shore of the Sea of Vilayet since time immemorial. He was broadly built, with long, apish arms and a mighty chest, but with lean loins and thin, bandy legs. His face was broad, his forehead low and retreating, his hair thick and tangled. A belt for a knife and a rag for a loin cloth were all he wore in the way of clothing.

That he was where he was proved that he was less dully incurious than most of his people. Men seldom visited Xapur. It was uninhabited, all but forgotten, merely one among the myriad isles which dotted the great inland sea. Men called it Xapur, the Fortified, because of its ruins, remnants of some prehistoric kingdom, lost and forgotten before the conquering Hyborians had ridden southward. None knew who reared those stones, though dim legends lingered among the Yuetshi which half intelligibly suggested a connection of immeasurable antiquity between the fishers and the unknown island kingdom.

But it had been a thousand years since any Yuetshi had understood the import of these tales; they repeated them now as a meaningless formula, a gibberish framed to their lips by custom. No Yuetshi had come to Xapur for a century. The adjacent coast of the mainland was uninhabited, a reedy marsh given over to the grim beasts that haunted it. The fisher’s village lay some distance to the south, on the mainland. A storm had blown his frail fishing craft far from his accustomed haunts and wrecked it in a night of flaring lightning and roaring waters on the towering cliffs of the isle. Now, in the dawn, the sky shone blue and clear; the rising sun made jewels of the dripping leaves. He had climbed the cliffs to which he had clung through the night because, in the midst of the storm, he had seen an appalling lance of lightning fork out of the black heavens, and the concussion of its stroke, which had shaken the whole island, had been accompanied by a cataclysmic crash that he doubted could have resulted from a riven tree.

A dull curiosity had caused him to investigate; and now he had found what he sought, and an animal-like uneasiness possessed him, a sense of lurking peril.

Among the trees reared a broken domelike structure, built of gigantic blocks of the peculiar ironlike green stone found only on the islands of Vilayet. It seemed incredible that human hands could have shaped and placed them, and certainly it was beyond human power to have overthrown the structure they formed. But the thunderbolt had splintered the ton-heavy blocks like so much glass, reduced others to green dust, and ripped away the whole arch of the dome.

The fisherman climbed over the debris and peered in, and what he saw brought a grunt from him. Within the ruined dome, surrounded by stone dust and bits of broken masonry, lay a man on a golden block. He was clad in a sort of skirt and a shagreen girdle. His black hair, which fell in a square mane to his massive shoulders, was confined about his temples by a narrow gold band. On his bare, muscular breast lay a curious dagger with a jeweled pommel, a shagreen- bound hilt, and a broad, crescent blade. It was much like the knife the fisherman wore at his hip, but it lacked the serrated edge and was made with infinitely greater skill.

The fisherman lusted for the weapon. The man, of course, was dead; had been dead for many centuries. This dome was his tomb. The fisherman did not wonder by what art the ancients had preserved the body in such a vivid likeness of life, which kept the muscular limbs full and unshrunken, the dark flesh vital. The dull brain of the Yuetshi had room only for his desire for the knife with its delicate, waving lines along the dully gleaming blade.

Scrambling down into the dome, he lifted the weapon from the man’s breast. As he did so, a strange and terrible thing came to pass. The muscular, dark hands knotted convulsively, the lids flared open, revealing great, dark, magnetic eyes, whose stare struck the startled fisherman like a physical blow. He recoiled, dropping the jeweled dagger in his perturbation. The man on the dais heaved up to a sitting position, and the fisherman gaped at the full extent of his size, thus revealed. His narrowed eyes held the Yuetshi, and in those slitted orbs he read neither friendliness nor gratitude; he saw only a fire as alien and hostile as that which burns in the eyes of a tiger.

Suddenly the man rose and towered above him, menace in his every aspect. There was no room in the fisherman’s dull brain for fear, at least for such fear as might grip a man who has just seen the fundamental laws of nature defied. As the great hands fell to his shoulders, he drew his saw-edged knife and struck upward with the same motion. The blade splintered against the stranger’s corded belly as against a steel column, and then the fisherman’s thick neck broke like a rotten twig in the giant hands.

JEHUNGIR AGHA, lord of Khawarizm and keeper of the coastal border, scanned once more the ornate parchment scroll with its peacock seal and laughed shortly and sardonically.