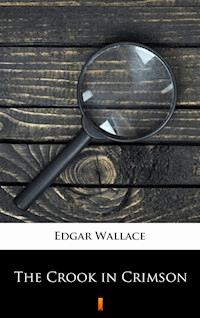 The Crook in Crimson ebook

Edgar Wallace is continuing to introduce readers to Mr. J. G. Reeder, one of the least glamorous of all fictional detectives. Mr. J. G. Reeder is neither a police detective nor an amateur crime-fighter, nor is he a private detective. In fact he is employed by the Bank of England, and acts as a kind of consultant to Scotland Yard. This is vintage Wallace, with no great depths but a good deal of humor and plenty of engaging goings-on along Wallace’s beloved Thames. Wallace was a British author who is best known for creating King Kong. Wallace was a very prolific writer despite his sudden death at age 56. In total Wallace is credited with over 170 novels, almost 1,000 short stories, and 18 stage plays.

IN the dusk of the evening the waterman brought his skiff under the overhanging hull of the Baltic steamer and rested on his oars, the little boat rising and falling gently in the swell of the river. A grimy, unshaven second officer looked down from the open porthole and spat thoughtfully into the water. Apparently he did not see the swarthy-faced waterman with the tuft of grey beard, and as apparently the waterman was oblivious of his appearance. Presently the unshaven man with the faded gold band on the wrist of his shabby jacket drew in his head and shoulders and disappeared.

A few seconds later a square wooden case was heaved through the porthole and fell with a splash in the water. For a moment one sharp corner was in sight, then it sank slowly beneath the yellow flood. A small black buoy bobbed up, and the waterman watched it with interest. To the buoy was attached a stout cord, and the cord was fastened to the case. He waited, moving his oars slowly, until the buoy was on the point of being sucked out of sight; then, with a turn of his wrist, he hooked an oar under the cord–literally hooked, for at the end of the short blade was a little steel crook.

Pushing the boat forward, he reached for the buoy and drew this into the stern sheets, fastened the cord round a wooden pin, and, lifting his oars, allowed the tide to carry him under the steamer’s stern. Anchored in midstream was a dingy-looking barge and towards this he guided the skiff.

A heavily-built young man came from the aft deck of the barge, and, reaching down a boathook, drew the skiff alongside. The swarthy man held on to the side of the barge, whilst the boathook was transferred to the taut line astern. The younger man did no more than fasten the soaking cord to a small bight. By this time the occupant of the skiff was on board.

‘Nobody about, Ligsey?’ he asked gruffly.

‘Nobody, cap’n,’ said the younger man.

The captain said nothing more, but walked to the deck-house astern and disappeared down the companion-way, pulling the hatch close after him. There he stayed till the estuary was a black void punctured with dim ships’ lights.

Ligsey went forward to where his youthful assistant sat on an overturned bucket, softly playing a mouth-organ. He stopped being musical long enough to remark that the tide was turning.

Ligsey nodded. He had already heard the chuff-chuff of the motor in the stern of the barge, where the skipper was starting it.

‘What we hangin’ around here for?’ asked the youth curiously. ‘We’ve missed one tide–we could have been up to Greenwich by now. Why don’t Captain Attymar–’

‘Mind your own business!’ growled the mate.

He heard the swarthy man calling him and went aft.

Together they pulled gingerly at the cord and brought the square, soaked packing-case to sight. Ligsey leaned over and gripped it with an instrument like a pair of huge ice-tongs, and the dripping case was brought to the narrow deck and stowed expeditiously in the well of the barge.

The Alloluna invariably carried bricks between a little yard on the Essex coast and Tenny’s Wharf. Everybody on the river knew her for an erratic and a dangerous-steering craft. The loud chuffing of her engine was an offence. Even nippy tug-boats gave her yawing bows a wide berth.

The boy was called aft to take charge of the engine, and Ligsey took the tiller. It was five o’clock on a spring morning when she came to Tenny’s Wharf, which is at Rotherhithe.

As a wharfage it had few qualities attractive to the least fastidious of bargees. It consisted of a confined space with room for two builders’ lorries to be backed side by side (though it required some manoeuvring to bring them into position), and the shabby little house where Joe Attymar lived. Through the weather-beaten gate, which opened at intervals to admit the builders’ carts, was Shadwick Lane. It had none of the picturesque character of the slum it used to be, when its houses were of wood and water-butts stood in every back-yard. Nowadays it consists of four walls, two on either side of the street. Bridging each pair is an inverted ‘V’ of slate, called a roof, and at frequent intervals there are four red chimney-pots set on a small, square, brick tower. These denote roughly where lateral walls divide one hutch from another. Each partition is called a ‘house,’ for which people pay rent when they can afford it. The walls which face the street have three windows and a doorway to each division.

Joe Attymar’s house did not properly stand in the lane at all, and Shadwick Lane was only remotely interested in the barge-master, for the curious reason that he could reach his house and yard by Shadwick Passage, a tortuous alley that threaded a way between innumerable back-yards, and under the shadow of a high warehouse, to Tooley Street. Year after year the swarthy man with the little iron-grey beard and the shaggy eyebrows brought his barge up the river, always with a cargo of bricks. And invariably the barge went down empty and without his presence; for, for some reason, there was neither passenger nor skipper on the down-river trip.

This fact was unknown to the people of Shadwick Lane. They were even unaware that Joe Attymar did not sleep in his house more than one night every month. They knew, of course, from the muddy old motor-car that he drove through the wide gates occasionally, that he went abroad, but guessed that he was engaged in the legitimate business of lighterman.

THERE are certain minor problems, which from time to time cause the chiefs of Scotland Yard to move uneasily and impatiently in their padded chairs and say to their immediate subordinates “Do something.” Mr. Attymar, though he was blissfully unaware of the fact, was one of those minor problems.

There are gaming houses which harass the police, strange little clubs and other establishments less easy to write about, but Mr Attymar was not associated with one of these. Such problems are, in one shape or another, perennial! Occasionally they grow acute and just at that moment the question of systematic smuggling was worrying Scotland Yard considerably.

‘They’ve pulled in a fellow who was peddling dope in Lisle Street last night,’ he said, ‘You might see him after his remand. I have an idea he’ll squeak.’

But the man in question was no squeaker, though he had certainly given that impression when he was taken red-handed. He said enough, however, to the patient detective to suggest that he might say more.

‘All that I could find out,’ said Gaylor, ‘is that this selling organization is nearly foolproof. The gang that we rushed last year isn’t handling the output, but I’m satisfied that it still has the same governor.’

‘Get him,’ said the Chief, who was in the habit of asking for miracles in the same tone as he asked for his afternoon tea. And then a thought struck him. ‘Go along and see Reeder. The Public Prosecutor was telling me today that Reeder is available for any extra work. He may be able to help, anyway.’

Mr. Reeder heard the request, sighed and shook his head. ‘I’m afraid it is rather–um–outside my line of business. Dope? There used to be a man named Moodle. It may not have been his name, but he had associations with these wretched people–’

‘Moodle, whose name was Sam Oschkilinski, has been dead nearly a year,’ said Gaylor.

‘Dear me!’ said Mr. Reeder, in a hushed voice appropriate to one who has lost a dear friend. ‘Of what did he die?’

Mr. Reeder knew nothing more that he could recall about dope merchants.

‘Haven’t you some record on your files?’ suggested Gaylor.

‘Perhaps,’ suggested Gaylor, ‘one of your peculiar friends–’

‘I have no friends,’ said Mr. Reeder

But here he did not speak the exact truth.