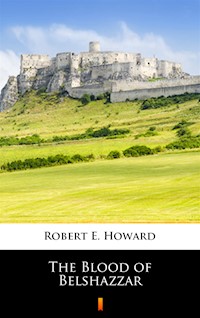 The Blood of Belshazzar ebook

Once it was called Eski-Hissar, the Old Castle, for it was very ancient even when the first Seljuks swept out of the east, and not even the Arabs, who rebuilt that crumbling pile in the days of Abu Bekr, knew what hands reared those massive bastions among the frowning foothills of the Taurus. Now, since the old keep had become a bandit’s hold, men called it Bab-el-Shaitan, the Gate of the Devil, and with good reason.

ONCE it was called Eski-Hissar, the Old Castle, for it was very ancient even when the first Seljuks swept out of the east, and not even the Arabs, who rebuilt that crumbling pile in the days of Abu Bekr, knew what hands reared those massive bastions among the frowning foothills of the Taurus. Now, since the old keep had become a bandit’s hold, men called it Bab-el-Shaitan, the Gate of the Devil, and with good reason.

That night there was feasting in the great hall. Heavy tables loaded with wine pitchers and jugs, and huge platters of food, stood flanked by crude benches for such as ate in that manner, while on the floor large cushions received the reclining forms of others. Trembling slaves hastened about, filling goblets from wineskins and bearing great joints of roasted meat and loaves of bread.

Here luxury and nakedness met, the riches of degenerate civilizations and the stark savagery of utter barbarism. Men clad in stenching sheepskins lolled on silken cushions, exquisitely brocaded, and guzzled from solid golden goblets, fragile as the stem of a desert flower. They wiped their bearded lips and hairy hands on velvet tapestries worthy of a shah’s palace.

Among them was one who stood out boldly from all the rest. He sat at a table drinking wine from a huge goblet, and the eyes of the others strayed to him continually. Among these tall sons of the desert and mountains his height did not seem particularly great, though it was above six feet. But the breadth and thickness of him were gigantic. His shoulders were broader, his limbs more massive than any other warrior there.

His mail coif was thrown back, revealing a lion-like head and a great corded throat. Though browned by the sun, his face was not as dark as those about him and his eyes were a volcanic blue, which smoldered continually as if from inner fires of wrath. Square-cut black hair like a lion’s mane crowned a low, broad forehead.

He ate and drank apparently oblivious to the questioning glances flung toward him. Not that any had as yet challenged his right to feast in Bab-el- Shaitan, for this was a lair open to all refugees and outlaws. And this Frank was Cormac FitzGeoffrey, outlawed and hunted by his own race. The ex-Crusader was armed in close-meshed chain mail from head to foot. A heavy sword hung at his hip, and his kite-shaped shield with the grinning skull wrought in the center lay with his heavy vizorless helmet, on the bench beside him. There was no hypocrisy of etiquette in Bab-el-Shaitan. Its occupants went armed to the teeth at all times and no one questioned another’s right to sit down to meat with his sword at hand.

Cormac, as he ate, scanned his fellow-feasters openly. Truly Bab-el- Shaitan was a lair of the spawn of Hell, the last retreat of men so desperate and bestial that the rest of the world had cast them out in horror. Cormac was no stranger to savage men; in his native Ireland he had sat among barbaric figures in the gatherings of chiefs and reavers in the hills. But the wild- beast appearance and utter inhumanness of some of these men impressed even the fierce Irish warrior.

There, for instance, was a Lur, hairy as an ape, tearing at a half-raw joint of meat with yellow fangs like a wolf’s. Kadra Muhammad, the fellow’s name was, and Cormac wondered briefly if such a creature could have a human soul. Or that shaggy Kurd beside him, whose lip, twisted back by a sword scar into a permanent snarl, bared a tooth like a boar’s tusk. Surely no divine spark of soul-dust animated these men, but the merciless and soulless spirit of the grim land that bred them. Eyes, wild and cruel as the eyes of wolves, glared through lank strands of tangled hair, hairy hands unconsciously gripped the hilts of knives even while the owners gorged and guzzled.

Cormac glanced from the rank and file to scrutinize the leaders of the band–those whom superior wit or war-skill had placed high in the confidence of their terrible chief, Skol Abdhur, the Butcher. Not one but had a whole volume of black and bloody history behind him. There was that slim Persian, whose tone was so silky, whose eyes were so deadly, and whose small, shapely head was that of a human panther–Nadir Tous, once an emir high in the favor of the Shah of Kharesmia. And that Seljuk Turk, with his silvered mail shirt, peaked helmet and jewel-hilted scimitar–Kai Shah; he had ridden at Saladin’s side in high honor once, and it was said that the scar which showed white in the angle of his jaw had been made by the sword of Richard the Lion-hearted in that great battle before the walls of Joppa. And that wiry, tall, eagle-faced Arab, Yussef el Mekru–he had been a great sheikh once in Yemen and had even led a revolt against the Sultan himself.

But at the head of the table at which Cormac sat was one whose history for strangeness and vivid fantasy dimmed them all. Tisolino di Strozza, trader, captain of Venice’s warships, Crusader, pirate, outlaw–what a red trail the man had followed to his present casteless condition! Di Strozza was tall and thin and saturnine in appearance, with a hook-nosed, thin-nostriled face of distinctly predatory aspect. His armor, now worn and tarnished, was of costly Venetian make, and the hilt of his long narrow sword had once been set with gems. He was a man of restless soul, thought Cormac, as he watched the Venetian’s dark eyes dart continually from point to point, and the lean hand repeatedly lifted to twist the ends of the thin mustache.

Cormac’s gaze wandered to the other chiefs–wild reavers, born to the red trade of pillage and murder, whose pasts were black enough, but lacked the varied flavor of the other four. He knew these by sight or reputation –Kojar Mirza, a brawny Kurd; Shalmar Khor, a tall swaggering Circassian; and Jusus Zehor, a renegade Georgian who wore half a dozen knifes in his girdle.

There was one not known to him, a warrior who apparently had no standing among the bandits, yet who carried himself with the assurance born of prowess. He was of a type rare in the Taurus–a stocky, strongly built man whose head would come no higher than Cormac’s shoulder. Even as he ate, he wore a helmet with a lacquered leather drop, and Cormac caught the glint of mail beneath his sheepskins; through his girdle was thrust a short wide-bladed sword, not curved as much as the Moslem scimitars. His powerful bowed legs, as well as the slanting black eyes set in an inscrutable brown face, betrayed the Mongol.

He, like Cormac, was a newcomer; riding from the east he had arrived at Bab-el-Shaitan that night at the same time that the Irish warrior had ridden in from the south. His name, as given in guttural Turki, was Toghrul Khan.

A slave whose scarred face and fear-dulled eyes told of the brutality of his masters, tremblingly filled Cormac’s goblet. He started and flinched as a sudden scream faintly knifed the din; it came from somewhere above, and none of the feasters paid any attention. The Norman-Gael wondered at the absence of women-slaves. Skol Abdhur’s name was a terror in that part of Asia and many caravans felt the weight of his fury. Many women had been stolen from raided villages and camel-trains, yet now there were apparently only men in Bab-el- Shaitan. This, to Cormac, held a sinister implication. He recalled dark tales, whispered under the breath, relating to the cryptic inhumanness of the robber chief–mysterious hints of foul rites in black caverns, of naked white victims writhing on hideously ancient altars, of blood-chilling sacrifices beneath the midnight moon. But that cry had been no woman’s scream.

Kai Shah was close to di Strozza’s shoulder, talking very rapidly in a guarded tone. Cormac saw that Nadir Tous was only pretending to be absorbed in his wine cup; the Persian’s eyes, burning with intensity, were fixed on the two who whispered at the head of the table. Cormac, alert to intrigue and counter- plot, had already decided that there were factions in Bab-el-Shaitan. He had noticed that di Strozza, Kai Shah, a lean Syrian scribe named Musa bin Daoud, and the wolfish Lur, Kadra Muhammad, stayed close to each other, while Nadir Tous had his own following among the lesser bandits, wild ruffians, mostly Persians and Armenians, and Kojar Mirza was surrounded by a number of even wilder mountain Kurds. The manner of the Venetian and Nadir Tous toward each other was of a wary courtesy that seemed to mask suspicion, while the Kurdish chief wore an aspect of truculent defiance toward both.

As these thoughts passed through Cormac’s mind, an incongruous figure appeared on the landing of the broad stairs. It was Jacob, Skol Abdhur’s majordomo–a short, very fat Jew attired in gaudy and costly robes which had once decked a Syrian harem master. All eyes turned toward him, for it was evident he had brought word from his master–not often did Skol Abdhur, wary as a hunted wolf, join his pack at their feasts.

“The great prince, Skol Abdhur,” announced Jacob in pompous and sonorous accents, “would grant audience to the Nazarene who rode in at dusk–the lord Cormac FitzGeoffrey.”

The Norman finished his goblet at draft and rose deliberately, taking up his shield and helmet.