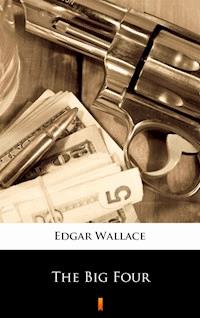 Best remembered for penning the screenplay for the classic film „King Kong”, author Edgar Wallace was an astoundingly popular luminary in the action-adventure genre in the early twentieth century. „The Big Four” is a story packed with intrigue, treachery, assassinations, and machinations, and it highlights Wallace’s unmatched skill in setting a pulse-pounding pace. Wallace was an extremely prolific writer who wrote over 175 novels, plus numerous plays, essays and journalistic articles. During the peak of his success during the 1920’s, it was said that a quarter of all books read in England were written by him. Many of his novels were made into films and TV dramas.

I. THE BIG FOUR SYNDICATE AND THE MAN WHO SMASHED IT

II. THE BURGLARY AT GOODWOOD

IV. A RACE AT OSTEND

VI. “PINKY” AND THE BANK MANAGER

VII. THE START OF THE WORLD

I. THE BIG FOUR SYNDICATE AND THE MAN WHO SMASHED IT

TO all outward appearance, Douglas Campbell was a dour and possibly a short-tempered man of forty-eight, tall and broad of shoulder. He had what women describe as a bad-tempered face, since, through no fault of his own, his eyebrows met.

As chairman and general manager of the Federated Assurances it was only right and proper that he should be credited with a total absence of any sense of humour. He was, as all who have met him will testify, a grave and serious man, who used precise language cautiously.

He sat at his table one spring morning reading his correspondence. Presently he put the letters down and looked at his watch.

“I am expecting Mr. Robert Brewer in a few minutes,” he said. “Show him straight in, and see that we are not interrupted.”

There was a tap at the door, and the secretary took from the hands of the clerk a visiting card.

Mr. Robert Brewer was young, perfectly and fashionably attired, and carried in his very presence the hallmark of “good tone.” On his upper lip was a tiny well-regulated moustache; in his right eye was a monocle; and about him generally was that air of buoyant freshness which can only come from the consciousness of youth.

He advanced to Campbell with outstretched hand.

“My dear old Highlander, you’re glad to see me!”

“I’m not so sure about that,” said Campbell. “Sit down. That will do, Mr. George. You’re looking very bright and beautiful this morning.”

“Aren’t I?” said Mr. Bob Brewer delightedly. “Dear old thing, I feel positively pretty. Now let us get down to business. I gather you haven’t brought me from New York to hand me compliments.”

“You’re a wonderful man, Bob,” said Campbell admiringly. “Man! If I’d had half your cheek when I was your age, if I’d been half as stuck on myself as you are, if I’d had just a little touch of your coolness, audacity, and unscrupulousness, I’d have been a millionaire!”

“Instead of which you are a two-millionaire,” said Bob Brewer, “whilst I’m a poor devil of an insurance detective, finding it very hard to make both ends meet.”

Mr. Campbell drew up his chair close to the table, and lowered his voice.

“Bob, the chairmen of three of our companies have advised our sending to you. I represent six of the biggest insurance companies in this country, mostly burglary, accident, and that sort of thing. You know the kind of business. You’ve been connected with it yourself.”

“We insure society against their follies and carelessness,” Mr. Campbell went on, “and, frankly, it hasn’t paid. Bob, you’ve heard about the sins of society? Well, I’ll tell you what its principal sin is–lack of grey matter. We’ve got the finest and the best clients in Britain, the cream of the whole bunch. Everybody with money and personal adornment is insured with us. But, Bob, their trouble is that whilst they had enough brains to get their money they haven’t got enough to keep it.

“You know what they are,” he went on. “They move like automatons from one fashionable place to another, and they move in a crowd like a flock of sheep. They’re at Harrogate, they’re at Paris Plage, they’re at Ostend in July, at Deauville at the end of July, at Aix in the season, at Monte Carlo, at St. Moritz, and only the happy fact that we’ve been at war with Germany prevents them going to Wiesbaden at the proper time. Now, when that army moves, Bob, there’s another little army which follows it. They’re the camp followers, or scamp followers, or whatever you like to call them. They’re the parasites who live upon these mugs––”

“They’re mugs and nothing else,” said Campbell. “If they weren’t mugs they’d be original. They’d go to St. Moritz in the summer, and Ostend in the winter. But, as I was saying, there’s a young army of parasites that moves with them and lives on them, and unless we want to go broke it’s our job to frustrate their knavish tricks, as the Old Book says.”

“You’re a whale on insurance, Campbell, but you’re rather short in the literary line. The clever little line you quote is not, as you imagine, from the Old Book!”

“It doesn’t matter where it’s from,” Campbell went on. “The point is this–we’ve got to put a man on specially to watch over these sheep, and see that they are not torn limb from limb by the wolves. We are going to offer you a very big salary to take this job on and give you permission to accept any private commissions that may come your way. Is it a bet?”

“It all depends upon what your idea of a handsome salary is,” said Bob with a little grin. “In the old days it used to be somewhere in the region of £300 or £400 per annum.”

“We are more broad-minded now,” said Campbell, “and we never talk under thousands.”

Brewer looked at him and nodded.

Campbell walked to the door and turned the key.

“I’ll introduce you to the names of the king-bird of all the birds of prey,” he said; “he’s the boss-man of the Big Four–‘Reddy’ Smith.”

“Reddy, eh?” he said; “why, I need no introduction to Reddy! You couldn’t live in the seams of New York City and not know him.”

“Does he know you?” asked the other quickly.

“He does not,” replied Bob. “We’ve never met in the way of business, but I know him. You see, in New York, I was on the commercial side of insurance–trade frauds and that sort of thing. Reddy was a con man, an advertisement faker. He used to sell non-existent shares to the deluded agriculturists of the Middle West. I have seen him at exercise in a prison yard, but I doubt if he knows me. As a matter of fact, I was on his track about a year ago, before he sailed for Europe.”

“All I know about him,” he said; “I have secured from the police. He has been working with a swell crowd in France, but they never brought any charge home to him, although it is pretty well known he was concerned in one or two bad robberies. I have information that he is at Monte Carlo. Unfortunately a number of our clients are there also, including a selection of our brightest muno profiteers.”

“From which effort of word-making I gather you mean gentlemen who have made profits out of munitions,” suggested Bob.

“Exactly,” said Campbell. “Reddy doesn’t work alone. There’s a whole gang. You will find them and their womenfolk there, encrusted with precious stones and clothed in rainbow raiment. They will be eating ice-creams with diamond spoons, and new peas with golden knives, and you will possibly interrupt Mr. Reddy just as he is telling the most bloated of these about a diamond mine that he has discovered in Sicily. Reddy always carries a few spare diamonds as a convincing proof.”

“What help do I get from the French police?” asked Bob, and in reply his new employer pulled open the drawer and took out a small leather-bound book.

Bob took the book, examined it, and slipped it into his pocket.

“Now off you go. You will live at the best hotels.”

“I knew your father,” said Mr. Campbell eyeing him severely, “and he was a good and thrifty Scot. I knew your mother, and she was a Macleod and a thrifty soul. But you, Bob, you have just developed into a spendthrift Englishman, Shall I give you a little on account?”

“A lot’s a little,” said Bob. “I will take six months’ salary, and I will let you know what I want for expenses. I shall stay for a few days in Paris, and Paris costs money.”

Two men sat outside the Cafe de Paris in Monte Carlo. They were both well-dressed, both clean-shaven, and had the appearance of citizens of the world, which meant that they may have been of any nationality, but were probably American.

The elder of the two was sucking a cigar thoughtfully, and nodding his replies to the other.

“I have never met him, but I’ve heard a lot about him. Jimmy, this place is not going to be healthy after Monday. I think we’ll skip by the Sunday morning train. That gives us four days to draw dividends. What is this Brewer like?”