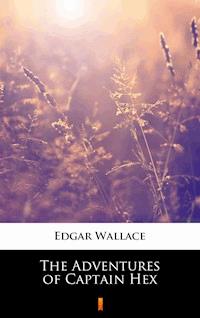 The Adventures of Captain Hex ebook

The hero, the discharged Army Captain Reginald Hex, was the prototype for Anthony Newland, whose adventures were related several years later in The Brigand (Hodder & Stoughton, London, 1927). The first two Hex stories were revised and published as Anthony Newland stories in that collection under the titles „Buried Treasure” and „A Contribution to Charity”. The stories are adventurous and well written but definitely a product of their time and place. Edgar Wallace was a British author who is best known for creating King Kong. Wallace was a very prolific writer despite his sudden death at age 56. In total Wallace is credited with over 170 novels, almost 1,000 short stories, and 18 stage plays. Wallace’s works have been turned into well over 100 films.

III. THE FOILING OF MR. HARRY B. KINGBERRY

V. THE MAN WHO BETRAYED HIMSELF

VI. THE SECRET OF THE HIDDEN VAULT

CAPTAIN REGGIE HEX threw up the window of his sitting-room and looked across the chimney tops of Bloomsbury with a critical eye.

It was a sunny day, and even chimney-tops and untidy back-windows have a poetry in the golden light of an early morning in summer to a young man plentifully endowed with faith in his own capabilities.

His age may have been twenty-six, and he was passably good-looking. He had a pair of bright, blue, humourous eyes that seemed forever laughing, a straight nose, a firm, large mouth, shaded by the smallest of moustaches.

His face was tanned brick-red, and he had the appearance of being what in fact he was–an army officer in mufti. If you looked twice at him you realised that the mufti was shabby, and when he turned round, so that the slanting sunlight caught his garments in a searching light, the suggestion of poverty became more apparent.

When he walked to the table which had been laid for him it was noticeable that he limped slightly, and if this minor infirmity be compared with the evidence of the silver badge in the lapel of his coat and the framed certificate above the writing-table in one corner of the room the cause and effect were exposed.

The room was sparsely furnished. Green felt covered the floor, a plain green paper the walls. There was an old gate-legged table, two or three rush-bottom chairs, a big lounge chair which Captain Hex had alone salvaged from the wreckage of his civilian possessions, and the writing-table made up the furniture.

There were a few cheap prints of old masters scattered about the room, a few framed photographs on the mantelpiece, and the only remarkable decoration of the chamber was that which filled the greater portion on one wall space.

It was formed by two great sheets of brown paper. On the surface were neatly pasted at intervals photographs which had evidently been cut from illustrated newspapers.

“Bring your grub in here.”

In a few moments there appeared, a plate in one hand and a cup in the other, Belshazzar Smith, late private of the Scots Guards, six feet high, and broad; a sandy man of gentle countenance, with a little ginger moustache and shaggy eyebrows that topped a pair of solemn blue eyes. Add to this a certain baldness and you have the man. He had this in common with his master–that he wore in the button-hole of his ill-fitting coat the silver badge of service.

“Sit down, Belshazzar Smith,” said Captain Hex, reaching out and drawing a chair to the table. “We’ll start fair.”

“I’d just as soon have my grub in the kitchen if you don’t mind, sir,” pleaded the soldier.

“Be a democrat,” snarled Hex. “Sit down with your equals and even worse–where the devil did you get that name of Belshazzar?”

“A Bible name, sir,” said Mr. Smith with great gravity. “All our family had that kind of name: Abijah, Shallum, Jotham, Pekah, and Gehazi.”

“Good Lord!” said the startled Captain Hex. “You had a lucky escape, for if Belshazzar is a Biblical name, I’m a Hun. But let that go. We will review the situation. I met you last night for the first time!”

I offered you a job at nothing a week, but with prospects.”

“Go on eating, Belshazzar. You’re discharged from the army. Why don’t you go back to your old job?”

“Because,” Captain Hex went on, “because there is no old job–that’s what you told me last night. Because you left a little shop to join the army and when you came out you found it in the hands of a healthy young alien named–”

The Gallery of War Profiteers

“Blow Shakespeare!” said Captain Hex. “Now listen to me. I had a business in 1914. It was a good business–foreign agency, stock-buying, and all that sort of thing. I chucked it up: two thousand a year, closed my office, and went into the army.

“Today,” he said grimly, “every one of my customers is on the books of Rosenbaum and Toblinsky. From their names,” he went on, “you might imagine that they are Irish [sic]. “They’re not. They’re Russians. They are rich, Belshazzar, rich beyond the dreams of actresses.”

He rose and walked to the wall, where his picture-gallery offended the unities and stabbed with his finger portrait after portrait, as he reeled off their titles and biographies.

“That’s William O. McNeal, real name Adolph Bernsteiner, the Shell King; that is Harry V. Teckle, the Steel King; that is Theodore Match, the Shipping King; that is Montague G. Flake, the Margarine King; this fellow with the funny nose is Michael O. Blogg, the Jam King–and that fellow with the glasses is the Cotton King; and that lad with the dyspeptic eye and the diamond pin is the Lumber King–bow to Their Majesties, Belshazzar Smith. They are going to make us rich!”

“They are our little Eldorados,” said Captain Hex calmly, “our Pay Cash or Bearers; our Money from Home!”

“Do you mean they’re relations of yours?” Said Belshazzar, in tones of awe.

“God forbid!” said Captain Hex piously. “Sit you down and I’ll expound the Plan of Operations and the General Idea.”

For an hour he expounded his scheme, and comprehension came very slowly to Mr. Smith, but it came.

“And now,” said Captain Hex, getting up, “we will go to the office, and the great advantage of living in your office, Smith, is that you aren’t very far from home.”

He walked to the writing-table, pulled open a drawer, and took out a wad of press-cuttings, and from these he selected one.

“Before we proceed,” he said, “go down to the front door and hang out the board. You will find it in the kitchen. We must do everything regularly.

Mr. Smith disappeared into the tiny kitchen, and presently returned with a small black board on which was painted in white letters–

“That’s right,” said Hex approvingly. “You will find two nails outside the door, and your job will be to hang it out every morning and take it in every night, providing the youth of Lambeth does not pinch it.”

When Smith returned, his employer took up the cutting.

“Listen to this. It is a description of a sale at Christie’s. ‘A small box of miscellaneous manuscript went to the bid of Mr. Montague Flake at 120 guineas. The box is of carved Spanish mahogany,’ etc., etc. I will not bother you with the details. The point is that Mr. Flake is a great collector of old manuscript and a great hog.”

“Now, your part is dead easy,” continued Captain Hex, consulting a Bradshaw. “You go down to–let me see–yes, here is a likely place called Little Wenson, and buy a farm. Do the best you can with £200, but remember, it has got to be a free-hold property. It need not be large. It need not be near a road, and preferably there should be at least one tree.”

That is your job,” Hex said. “You can take your time. Live as cheaply as you can, but don’t close the deal until you get a wire from me. Send me all the particulars, a rough sketch of the property, and your address. You are not to communicate with me except through this office, and under no circumstances are you to disclose the fact that you know me or have any business dealings with me.”

An hour later Smith left. Captain Hex took off his coat and set to work. In a box in his bedroom were half-a-dozen sheets of age-stained parchment. He spent the rest of the morning and the greater part of the afternoon covering these with fine writing.

There is no more highly respected figure in financial and business circles than Mr. Montague Flake, for Mr. Flake controlled the butter markets of London, Copenhagen, Rotterdam and, in pre-war days, Tomsk, from which it may be gathered that Mr. Flake was a considerable personage even before the time he managed to corner the butter supplies.

The Home of the Butter King

Officially, Mr. Flake did not control the market. Officially he had nothing to do with the cornering of margarine. In all his stores–and there were 631 branches of Flake U.P. Stores throughout the United Kingdom–the “U.P.” standing for “Universal Provisions”–there was a large notice respectfully informing customers that the management was doing its best to get supplies of butter and margarine, but that the failure of the hay crop in Denmark, and the root crop in Ireland, was causing much embarrassment, whilst the extra cost of freights (which really worked out at an additional ¼d per pound), compelled the reluctant directors to raise the price of butter 3d per pound, and margarine 2½d.

And the customers were duly impressed, and, what is more to the point, they paid, and millions of twopence-ha’pennies went into Mr. Flake’s pocket, for he was the company, the directors and the shareholders. This was in the days when the price of butter was not controlled and when butter-cards were unknown.

Mr. Flake had a large house in St John’s Square, in the most fashionable part of London. He had a model farm in Norfolk, an estate in Kent, a shoot in Yorkshire and a salmon river in Scotland.

Mr. Flake was a harsh-faced man, wholly unsuggestive of butter or anything oleaginous or suave. He was a widower and lived alone, save a housekeeper, three secretaries, four chauffeurs, twelve men-servants, and a small army of white-capped cooks, housemaids, and the like.

Mr. Flake sat in his magnificent library, and was nibbling his pen, for he was in the agony of composition.

He had scratched out twenty lines when a visitor was announced. He took up the card that lay on the silver plate and read the inscription without any great show of interest. It read: