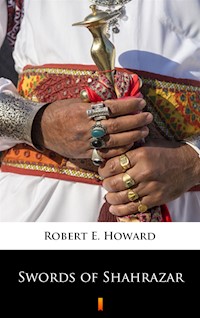 Kirby O’Donnell is a Howard hero less familiar to most readers. Howard only wrote three stories about O’Donnell’s exploits, of which only two actually saw print during his lifetime -- „The Treasures of Tartary” and „Swords of Shahrazar” -- neither in Weird Tales.

KIRBY O’DONNELL opened his chamber door and gazed out, his long keen- bladed kindhjal in his hand. Somewhere a cresset glowed fitfully, dimly lighting the broad hallway, flanked by thick columns. The spaces between these columns were black arched wells of darkness, where anything might be lurking.

Nothing moved within his range of vision. The great hall seemed deserted. But he knew that he had not merely dreamed that he heard the stealthy pad of bare feet outside his door, the stealthy sound of unseen hands trying the portal.

O’Donnell felt the peril that crawled unseen about him, the first white man ever to set foot in forgotten Shahrazar, the forbidden, age-old city brooding high among the Afghan mountains. He believed his disguise was perfect; as Ali el Ghazi, a wandering Kurd, he had entered Shahrazar, and as such he was a guest in the palace of its prince. But the furtive footfalls that had awakened him were a sinister portent.

He stepped out into the hall cautiously, closing the door behind him. A single step he took–it was the swish of a garment that warned him. He whirled, quick as a cat, and saw, all in a split second, a great black body hurtling at him from the shadows, the gleam of a plunging knife. And simultaneously he himself moved in a blinding blur of speed. A shift of his whole body avoided the stroke, and as the blade licked past, splitting only thin air, his kindhjal, driven with desperate energy, sank its full length in the black torso.

An agonized groan was choked by a rush of blood in the dusky throat. The Negro’s knife rang on the marble floor, and the great black figure, checked in its headlong rush, swayed drunkenly and pitched forward. O’Donnell watched with his eyes as hard as flint as the would-be murderer shuddered convulsively and then lay still in a widening crimson pool.

He recognized the man, and as he stood staring down at his victim, a train of associations passed swiftly through his mind, recollections of past events crowding on a realization of his present situation.

Lure of treasure had brought O’Donnell in his disguise to forbidden Shahrazar. Since the days of Genghis Khan, Shahrazar had sheltered the treasure of the long-dead shahs of Khuwarezm. Many an adventurer had sought that fabled hoard, and many had died. But O’Donnell had found it–only to lose it.

Hardly had he arrived in Shahrazar when a band of marauding Turkomans, under their chief, Orkhan Bahadur, had stormed the city and captured it, slaying its prince, the Uzbek Shaibar Khan. And while the battle raged in the streets, O’Donnell had found the hidden treasure in a secret chamber, and his brain had reeled at its splendor. But he had been unable to bear it away, and he dared not leave it for Orkhan. The emissary of an intriguing European power was in Shahrazar, plotting to use that treasure to conquer India. O’Donnell had done away with it forever. The victorious Turkomans had searched for it in vain.

O’Donnell, as Ali el Ghazi, had once saved Orkhan Bahadur’s life, and the prince made the supposed Kurd welcome in the palace. None dreamed of his connection with the disappearance of the hoard, unless–O’Donnell stared somberly down at the figure on the marble floor.

That man was Baber, a Soudani servant of Suleiman Pasha, the emissary.

O’Donnell lifted his head and swept his gaze over the black arches, the shadowy columns. Had he only imagined that he heard movement back in the darkness? Bending over quickly, he grasped the limp body and heaved it on his shoulder–an act impossible for a man with less steely thews–and started down the hall. A corpse found before his door meant questions, and the fewer questions O’Donnell had to answer the better.

He went down the broad, silent hall and descended a wide marble stair into swallowing gloom, like an oriental demon carrying a corpse to hell; groped through a tapestried door and down a short, black corridor to a blank marble wall.

When he thrust against this with his foot, a section swung inward, working on a pivot, and he entered a circular, domed chamber with a marble floor and walls hung with heavy gilt-worked tapestries, between which showed broad golden frieze- work. A bronze lamp cast a soft light, making the dome seem lofty and full of shadows, while the tapestries were clinging squares of velvet darkness.

This had been the treasure vault of Shaibar Khan, and why it was empty now, only Kirby O’Donnell could tell.

Lowering the black body with a gasp of relief, for the burden had taxed even his wiry thews to the utmost, he deposited it exactly on the great disk that formed the center of the marble floor. Then he crossed the chamber, seized a gold bar that seemed merely part of the ornamentation, and jerked it strongly. Instantly the great central disk revolved silently, revealing a glimpse of a black opening, into which the corpse tumbled. The sound of rushing water welled up from the darkness, and then the slab, swinging on its pivot, completed its revolution and the floor showed again a smooth unbroken surface.

But O’Donnell wheeled suddenly. The lamp burned low, filling the chamber with a lurid unreal light. In that light he saw the door open silently and a slim dark figure glide in.

It was a slender man with long nervous hands and an ivory oval of a face, pointed with a short black beard. His eyes were long and oblique, his garments dark, even his turban. In his hand a blue, snub-nosed revolver glinted dully.

He had never been able to decide whether this man was the Oriental he seemed, or a European in masquerade. Had the man penetrated his own disguise? The emissary’s first words assured him that such was not the case.

“Ali el Ghazi,” said Suleiman, “you have lost me a valuable servant, but you have told me a secret. None other knows the secret of that revolving slab. I did not, until I followed you, after you killed Baber, and watched you through the door, though I have suspected that this chamber was the treasure vault.

“I have suspected you–now I am certain. I know why the treasure has never been found. You disposed of it as you have disposed of Baber. You are cup- companion to Prince Orkhan Bahadur. But if I told him you cast away the treasure forever, do you suppose his friendship would prevail over his wrath?

“Keep back!” he warned. “I did not say that I would tell Orkhan. Why you threw away the treasure I cannot guess, unless it was because of fanatical loyalty to Shaibar Kahn.”

He looked him over closely. “Face like a hawk, body of coiled steel springs,” he murmured. “I can use you, my Kurdish swaggerer.”

“How use me?” demanded O’Donnell.

“You can help me in the game I play with Orkhan Bahadur. The treasure is gone, but I can still use him, I and the Feringis who employ me. I will make him amir of Afghanistan and, after that, sultan of India.”

“And the puppet of the Feringis,” grunted O’Donnell.

“What is that to thee?” Suleiman laughed. “Thine is not to think. I will do the thinking; see thou to the enacting of my commands.”

“I have not said that I would serve you,” growled O’Donnell doggedly.

“You have no other choice,” answered Suleiman calmly. “If you refuse, I will reveal to Orkhan that which I learned tonight, and he will have you flayed alive.”

O’Donnell bent his head moodily. He was caught in a vise of circumstances. It had not been loyalty to Shaibar Khan, as Suleiman thought, which had caused him to dump an emperor’s ransom in gold and jewels into the subterranean river. He knew Suleiman plotted the overthrow of British rule in India and the massacre of the helpless millions. He knew that Orkhan Bahadur, a ruthless adventurer despite his friendship for the false Kurd, was a pliant tool in the emissary’s hands. The treasure had been too potent a weapon to leave within their reach.

Suleiman was either a Russian or the Oriental tool of the Russians. Perhaps he, too, had secret ambitions. The Khuwarezm treasure had been a pawn in his game but, even without it, a tool of the emissary’s sitting on the throne of Shahrazar, was a living menace to the peace of India. So O’Donnell had remained in the city, seeking in every way to thwart Suleiman’s efforts to dominate Orkhan Bahadur. And now he himself was trapped.

He lifted his head and stared murderously at the slim Oriental. “What do you wish me to do?” he muttered.

“I have a task for you,” answered Suleiman. “An hour ago word came to me, by one of my secret agents, that the tribesmen of Khuruk have found an Englishman dying in the hills, with valuable papers upon him. I must have those papers. I sent the man on to Orkhan, while I dealt with you.

“But I have changed my plans in regard to you; you are more valuable to me alive than dead, since there is no danger of your opposing me in the future. Orkhan will desire those papers that the Englishman carried, for the man was undoubtedly a secret-service agent, and I will persuade the prince to send you with a troop of horsemen to secure them. And remember you are taking your real orders from me, not from Orkhan.”

He stepped aside and motioned O’Donnell to precede him.