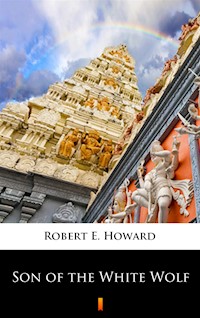 Son of the White Wolf ebook

Francis Xavier Gordon was a living legend in the Middle and Far East. The boars called him El Borac, „Swift,” the title earned by his awkward abilities with a gun, a knife and a sword. Now, the mighty El Borak must stretch its forces to prevent the Turkish uprising, protect the hermits from murders and stop the dangerous amir without allowing him to seize control over India.

I. THE BATTLE STANDARD

III. THE CALL OF BLOOD

IV. WOLVES OF THE DESERT

I. THE BATTLE STANDARD

THE commander of the Turkish outpost of El Ashraf was awakened before dawn by the stamp of horses and jingle of accoutrements. He sat up and shouted for for his orderly. There was no response, so he rose, hurriedly jerked on his garments, and strode out of the mud but that served as his headquarters. What he saw rendered him momentarily speechless.

His command was mounted, in full marching formation, drawn up near the railroad that it was their duty to guard. The plain to the left of the track where the tents of the troopers had stood now lay bare. The tents had been loaded on the baggage camels which stood fully packed and ready to move out. The commandant glared wildly, doubting his own senses, until his eyes rested on a flag borne by a trooper. The waving pennant did not display the familiar crescent. The commandant turned pale.

“What does this mean?” he shouted, striding forward. His lieutenant, Osman, glanced at him inscrutably. Osman was a tall man, hard and supple as steel, with a dark keen face.

“Mutiny, effendi,” he replied calmly. “We are sick of this war we fight for the Germans. We are sick of Djemal Pasha and those other fools of the Council of Unity and Progress, and, incidentally, of you. So we are going into the hills to build a tribe of our own.”

“Madness!” gasped the officer, tugging at his revolver. Even as he drew it, Osman shot him through the head.

The lieutenant sheathed the smoking pistol and turned to the troopers. The ranks were his to a man, won to his wild ambition under the very nose of the officer who now lay there with his brains oozing.

In the tense silence they all heard the low, deep reverberation in the west.

“British guns!” said Osman. “Battering the Turkish Empire to bits! The New Turks have failed. What Asia needs is not a new party, but a new race! There are thousands of fighting men between the Syrian coast and the Persian highlands, ready to be roused by a new word, a new prophet! The East is moving in her sleep. Ours is the duty to awaken her!

“You have all sworn to follow me into the hills. Let us return to the ways of our pagan ancestors who worshipped the White Wolf on the steppes of High Asia before they bowed to the creed of Mohammed!

“We have reached the end of the Islamic Age. We abjure Allah as a superstition fostered by an epileptic Meccan camel driver. Our people have copied Arab ways too long. But we hundred men are Turks! We have burned the Koran. We bow not toward Mecca, nor swear by their false Prophet. And now follow me as we planned–to establish ourselves in a strong position in the hills and to seize Arab women for our wives.”

“Our sons will be half Arab,” someone protested.

“A man is the son of his father,” retorted Osman. “We Turks have always looted the harims of the world for our women, but our sons are always Turks.

“Come! We have arms, horses, supplies. If we linger we shall be crushed with the rest of the army between the British on the coast and the Arabs the Englishman Lawrence is bringing up from the south. Onto El Awad! The sword for the men–captivity, for the women!”

His voice cracked like a whip as he snapped the orders that set the lines in motion. In perfect order they moved off through the lightening dawn toward the range of sawedged hills in the distance. Behind them the air still vibrated with the distant rumble of the British artillery. Over them waved a banner that bore the head of a white wolf–the battle-standard of most ancient Turan.

WHEN Fräulein Olga von Bruckmann, known as a famous German secret agent, arrived at the tiny Arab hill-village of El Awad, it was in a drizzling rain, that made the dusk a blinding curtain over the muddy town.

With her companion, an Arab named Ahmed, she rode into the muddy street, and the villagers crept from their hovels to stare in awe at the first white woman most of them had ever seen.

A few words from Ahmed and the shaykh salaamed and showed her to the best mud hut in the village. The horses were led away to feed and shelter, and Ahmed paused long enough to whisper to his companion:

“El Awad is friendly to the Turks. Have no fear. I shall be near, in any event.”

“Try and get fresh horses,” she urged. “I must push on as soon as possible.”