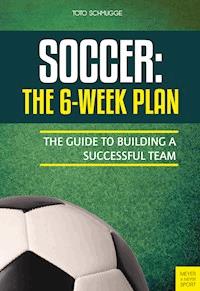 Soccer coaches need to train, practice, and drill players on passing, dribbling, shooting, tactics, and much more. But they often have a hard time finding the best exercises to create a good team. Toto Schmugge, a former professional soccer player from Germany, has created the perfect 6-week plan to help coaches of any skill and experience level give their team a competitive edge and gain confidence as a coach. This plan is especially adjusted to help during pre-season training. These practical training programs were created by professional soccer players and coaches and can be applied to any team. Regardless of the age or talent of the players, with these exercises, they will learn techniques and tactics and improve their strength, speed, endurance, and agility. The exercises are described in detail and very easy to follow. Illustrations for every exercise provide the coach with visual aids to explain the drill. With Toto's guide, any team will become more successful.

The Guide to Building a Successful Team

The contents of this book were carefully researched. However, all information is supplied without liability. Neither the author nor the publisher will be liable for possible disadvantages or damages resulting from this book.

Mark start and finish lines at a distance of 33 feet.

Lateral running (turn the body and move the legs)

Sprint to the finish line

Use cones to mark out a square 33 feet by 33 feet. Create as many squares as necessary for the number of players.

Each cone has two players.

Each group has one ball.

Player 2 takes the ball with a touch to the side and passes to player 3, then follows the ball to the third cone, and so on.

Pay attention to detail; make sure the players are concentrating when performing the exercises.

With a defeat (a bad first touch or if the player needs more than two touches), the whole group must do 10 push-ups.

Use cones to mark out a square 33 feet by 33 feet. Create as many squares as necessary for the number of players.

Each field has seven players, with the two youngest players in the middle.

The outer players adapt to any position of the ball.

The two players in the middle try to win the ball.

The player who loses the ball must be in the middle.

Use cones to mark out a playing field that goes from penalty area to penalty area and place a goal at each end of the field.

Divide players into two teams based on their ages (i.e., an older team and a younger team).

A goal only counts if all players from the attacking team are in the opposing half of the field.

All players from the defending team must be in their own half, otherwise the goal counts double.

Assume the plank position and alternate slowly lifting the right and left legs.

Assume a side plank position and then raise and lower the top leg.

While lying face down with the feet flexed and toes firmly on the ground, put the hands in the air behind the body and then swing them to the front.

Using the forearm and heel for support, lift the body slightly off the ground.

While keeping the body in the air, extend the other leg.

Start in a forearm plank position.

Lift the opposite hand and leg and hold for 10-20 seconds.

Repeat with the other hand and leg.

Make a field that is twice the size of the penalty area.

Split players into four teams (depending on the number of players).

Each team plays each other twice (first and second round).

Winner of the tournament is the team that finishes with the most wins.

The team that is in last place must clean up the playing/training field.

Put one cone at each corner of the penalty area.

Players run around the cones for 4 minutes followed by a 3-minute break.

Repeat for a total of four runs.

If a lactate test was performed, players should run at 85-90 % of the maximum pulse.

If there are no values, each player should run about 70-80 % of maximum speed BBs.

Make several pairs of 5-foot goals approximately 32 feet apart, depending on the level of performance.

Put 2-3 players at every goal.

Each pair of goals gets one ball.

Player passes the ball through the goals and then switches places with his or her teammate.

After the opposite player receives the pass, the ball is returned through the other goal.

Players continue to pass the ball back and forth through the goals.

Create a power circuit with eight stations. Place a medicine ball (4-10 lbs depending on the level of performance) at seven of the stations and a hurdle at station 4.

Two players work together at each station.

Station 3: Jump while holding the medicine ball above the head.

Station 4: Side jump back and forth over the hurdle, alternating the lead foot each time.

Station 5: One partner lies on his or her stomach, and the other partner jumps or skips side to side over him or her.

Station 6: Hold two medicine balls and jump, bringing the knees up as high as possible.

Station 7: Hold the medicine ball with straight arms in front of your body. Throw the ball straight up, then quickly lie down on the ground and get back up, catching the ball before it hits the ground.

Station 8: One player begins the exercise lying on the stomach. The partner throws the medicine ball to him or her and then lies down on the ground. The first partner immediately gets up without the ball touching the ground, and the exercise repeats.

The partners take turns at each station.

Perform the exercises at high speed so players can get the most out of the workout.

The exercises should be performed in about 20-40 seconds (depending on the power level) per play.

Two players begin at each cone, with one player in the center.

Player 1 passes the ball to player 2 (in the middle), calls “Turn!” and follows the ball.

Player 2 turns with a ball touch to the other side, passes to player 3, calls “Turn!” and follows the ball.

Player 3 takes the ball with a touch to the side, passes to player 4, calls “Turn!” and follows the ball.

Player 4 takes the ball with a touch to the front, passes to player 1 (now standing in the middle), calls “Turn!” and follows the ball to the middle.

Player 1 turns with a ball touch to the other side, passes to player 5, calls “Turn!” and and follows the ball.

Player 5 takes the ball with a touch to the side and play continues to player 6, and so on.

Use cones to mark a playing field about 130 feet in length and 18 yards wide with a goal at each end.

The coach stands with a supply of balls on the sideline.

The two teams play against each other.

The defending team defends both goals and the other team can score in both goals.

When the ball is won by the defending team, they must try to keep the ball as long as possible.

The team that scores the most goals wins the game.

Goals only count if all players of the attacking team are in the opposing half.

All players from the defending team must be on their half, otherwise the goal counts double.

Make an outer track by placing cones on the penalty corners.

In the interior of the outer course, build a second course with obstacles:

Each player runs at speed of 90 % of the maximum pulse rate.

Players run around the outer track and then move to the inner obstacle course.

Continue to repeat the outer and inner courses for 4 minutes.

Players should do a total of four 4-minute sessions with a 3-minute break between each.

Place two or three players at each cone.

Player 1 passes to player 2 and calls out “Turn!”

Player 2 takes the ball with a touch in the lane, passes it to player 3, and calls out “Turn!”

Player 3 takes the ball with a contact in the lane, plays a long ball flight to player 4, and calls out “Turn!”

Player 4 takes the ball out of the air with a contact in the course, passes to player 5, and calls out “Turn!”

Player 5 kicks the ball back to player 4.

Player 4 kicks the ball to player 6 and calls out “Turn!”

Player 6 takes the ball with a contact to the side, plays a long flight ball to player 7, and calls out “Turn!”