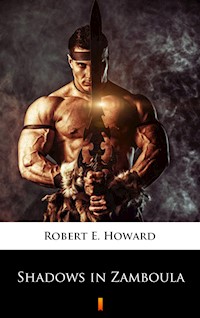 Shadows in Zamboula is one of the original stories by Robert E. Howard about Conan the Cimmerian, first published in Weird Tales in November, 1935. Its original title was „The Man-Eaters of Zamboula”. The story takes place over the course of a night in the desert city of Zamboula, with political intrigue amidst streets filled with roaming cannibals. It features the character Baal-pteor, one of the few humans in the Conan stories to be a physical challenge for the main Cimmerian character himself.

‘Peril hides in the house of Aram Baksh!’

The speaker’s voice quivered with earnestness and his lean, black-nailed fingers clawed at Conan’s mightily muscled arm as he croaked his warning. He was a wiry, sun-burnt man with a straggling black beard, and his ragged garments proclaimed him a nomad. He looked smaller and meaner than ever in contrast to the giant Cimmerian with his black brows, broad chest, and powerful limbs. They stood in a corner of the Sword-Makers’ Bazar, and on either side of them flowed past the many-tongued, many-colored stream of the Zamboula streets, which is exotic, hybrid, flamboyant and clamorous.

Conan pulled his eyes back from following a bold-eyed, red-lipped Ghanara whose short skirt bared her brown thigh at each insolent step, and frowned down at his importunate companion.

‘What do you mean by peril?’ he demanded.

The desert man glanced furtively over his shoulder before replying, and lowered his voice.

‘Who can say? But desert men and travelers have slept in the house of Aram Baksh, and never been seen or heard of again. What became of them? He swore they rose and went their way–and it is true that no citizen of the city has ever disappeared from his house. But no one saw the travelers again, and men say that goods and equipment recognized as theirs have been seen in the bazars. If Aram did not sell them, after doing away with their owners, how came they here?’

‘I have no goods,’ growled the Cimmerian, touching the shagreen-bound hilt of the broadsword that hung at his hip. ‘I have even sold my horse.’

‘But it is not always rich strangers who vanish by night from the house of Aram Baksh!’ chattered the Zuagir. ‘Nay, poor desert men have slept there–because his score is less than that of the other taverns–and have been seen no more. Once a chief of the Zuagirs whose son had thus vanished complained to the satrap, Jungir Khan, who ordered the house searched by soldiers.’

‘And they found a cellar full of corpses?’ asked Conan in good-humored derision.

‘Nay! They found naught! And drove the chief from the city with threats and curses! But–’ he drew closer to Conan and shivered–‘something else was found! At the edge of the desert, beyond the houses, there is a clump of palm trees, and within that grove there is a pit. And within that pit have been found human bones, charred and blackened! Not once, but many times!’

‘Which proves what?’ grunted the Cimmerian.

‘Aram Baksh is a demon! Nay, in this accursed city which Stygians built and which Hyrkanians rule–where white, brown and black folk mingle together to produce hybrids of all unholy hues and breeds–who can tell who is a man, and who a demon in disguise? Aram Baksh is a demon in the form of a man! At night he assumes his true guise and carries his guests off into the desert where his fellow demons from the waste meet in conclave.’

‘Why does he always carry off strangers?’ asked Conan skeptically.

‘The people of the city would not suffer him to slay their people, but they care naught for the strangers who fall into his hands. Conan, you are of the West, and know not the secrets of this ancient land. But, since the beginning of happenings, the demons of the desert have worshipped Yog, the Lord of the Empty Abodes, with fire–fire that devours human victims.

‘Be warned! You have dwelt for many moons in the tents of the Zuagirs, and you are our brother! Go not to the house of Aram Baksh!’

‘Get out of sight!’ Conan said suddenly. ‘Yonder comes a squad of the city-watch. If they see you they may remember a horse that was stolen from the satrap’s stable–’

The Zuagir gasped, and moved convulsively. He ducked between a booth and a stone horse-trough, pausing only long enough to chatter: ‘Be warned, my brother! There are demons in the house of Aram Baksh!’ Then he darted down a narrow alley and was gone.

Conan shifted his broad sword-belt to his liking, and calmly returned the searching stares directed at him by the squad of watchmen as they swung past. They eyed him curiously and suspiciously, for he was a man who stood out even in such a motley throng as crowded the winding streets of Zamboula. His blue eyes and alien features distinguished him from the Eastern swarms, and the straight sword at his hip added point to the racial difference.

The watchmen did not accost him, but swung on down the street, while the crowd opened a lane for them. They were Pelishtim, squat, hook-nosed, with blue-black beards sweeping their mailed breasts–mercenaries hired for work the ruling Turanians considered beneath themselves, and no less hated by the mongrel population for that reason.

Conan glanced at the sun, just beginning to dip behind the flat-topped houses on the western side of the bazar, and hitching once more at his belt, moved off in the direction of Aram Baksh’s tavern.

With a hillman’s stride he moved through the ever-shifting colors of the streets, where the ragged tunics of whining beggars brushed against the ermine-trimmed khalats of lordly merchants, and the pearl-sewn satin of rich courtezans. Giant black slaves slouched along, jostling blue-bearded wanderers from the Shemitish cities, ragged nomads from the surrounding deserts, traders and adventurers from all the lands of the East.

The native population was no less heterogenous. Here, centuries ago, the armies of Stygia had come, carving an empire out of the eastern desert. Zamboula was but a small trading-town then, lying amidst a ring of oases, and inhabited by descendants of nomads. The Stygians built it into a city and settled it with their own people, and with Shemite and Kushite slaves. The ceaseless caravans, threading the desert from east to west and back again, brought riches and more mingling of races. Then came the conquering Turanians, riding out of the East to thrust back the boundaries of Stygia, and now for a generation Zamboula had been Turan’s westernmost outpost, ruled by a Turanian satrap.

The babel of a myriad tongues smote on the Cimmerian’s ears as the restless pattern of the Zamboula streets weaved about him–cleft now and then by a squad of clattering horsemen, the tall, supple warriors of Turan, with dark hawk-faces, clinking metal and curved swords. The throng scampered from under their horses’ hoofs, for they were the lords of Zamboula. But tall, somber Stygians, standing back in the shadows, glowered darkly, remembering their ancient glories. The hybrid population cared little whether the king who controlled their destinies dwelt in dark Khemi or gleaming Aghrapur. Jungir Khan ruled Zamboula, and men whispered that Nafertari, the satrap’s mistress, ruled Jungir Khan; but the people went their way, flaunting their myriad colors in the streets, bargaining, disputing, gambling, swilling, loving, as the people of Zamboula have done for all the centuries its towers and minarets have lifted over the sands of the Kharamun.

Bronze lanterns, carved with leering dragons, had been lighted in the streets before Conan reached the house of Aram Baksh. The tavern was the last occupied house on the street, which ran west. A wide garden, enclosed by a wall, where date-palms grew thick, separated it from the houses farther east. To the west of the inn stood another grove of palms, through which the street, now become a road, wound out into the desert. Across the road from the tavern stood a row of deserted huts, shaded by straggling palm trees, and occupied only by bats and jackals. As Conan came down the road he wondered why the beggars, so plentiful in Zamboula, had not appropriated these empty houses for sleeping quarters. The lights ceased some distance behind him. Here were no lanterns, except the one hanging before the tavern gate: only the stars, the soft dust of the road underfoot, and the rustle of the palm leaves in the desert breeze.

Aram’s gate did not open upon the road, but upon the alley which ran between the tavern and the garden of the date-palms. Conan jerked lustily at the rope which depended from the bell beside the lantern, augmenting its clamor by hammering on the iron-bound teakwork gate with the hilt of his sword. A wicket opened in the gate and a black face peered through.

The black craned his neck to stare into the starlit road behind Conan; but he opened the gate without comment, and closed it again behind the Cimmerian, locking and bolting it. The wall was unusually high; but there were many thieves in Zamboula, and a house on the edge of the desert might have to be defended against a nocturnal nomad raid. Conan strode through a garden where great pale blossoms nodded in the starlight, and entered the tap-room, where a Stygian with the shaven head of a student sat at a table brooding over nameless mysteries, and some nondescripts wrangled over a game of dice in a corner.

Aram Baksh came forward, walking softly, a portly man, with a black beard that swept his breast, a jutting hook-nose, and small black eyes which were never still.