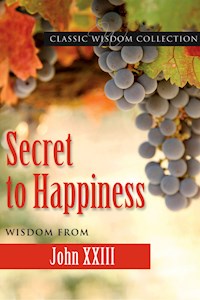 How can I discover the Secret to Happiness and holiness in my life? This collection contains famous and lesser-known writings from the humble 20th century giant, Saint John XXIII. Born Angelo Giuseppe Roncalli and elected pope in 1958, John XXIII was well-loved during his papacy for his humility and gentle wit.Surprising the world with his intention to call Vatican II, he was not a stranger to the worries of life. Secret to Happiness has short chapters, showing us the secret to authentic happiness: humility and confidence in God’s will for us.

Compiled and with a foreword by Donna Giaimo, FSP

Secret to Happiness: Wisdom from John XXIII / compiled and with a foreword by Donna Giaimo, FSP.

"P” and PAULINE are registered trademarks of the Daughters of St. Paul.

IWhat God Wants Me to Be

IIII Am Nothing; God Is All

IVPersonal Holiness in the Real World

VLetting Go of What Others Think

XAdopting the Gentleness of Christ

XILeaving the Future to God

XIVSimplicity, Sure Way to Sanctity

XVIPeace from Following God’s Will

XXIPoverty in Spirit and in Fact

XXVYou Know That I Love You!

I don’t remember the occasion or even the speaker, but a story served as my introduction to Saint John XXIII. It couldn’t have come at a better time.

I had recently entered the convent and, as a newbie to religious life, was pretty earnest in my efforts to become holy. Equipped with an idealism characteristic of youth, I set out to make myself a saint—preferably in three years or less. Yet the harder I tried, the wider the chasm seemed between the goal and my reality. In the daily examination of conscience I had been taught to make, the meager number of “victories” in virtue compared to the painfully obvious failings left me disconcerted. And anxious. The saints—at least those whose lives I had read up until then— made it seem so easy. Perhaps I was doing something wrong or wasn’t trying hard enough. Or just maybe, I began to worry, I wasn’t cut out to be a sister in the first place.

At some point in the midst of all this tormented soul-searching, someone told me a story about Pope John XXIII. It seems that after his election, the new pope had trouble sleeping. One night John woke with a start, his thoughts flying to a particularly thorny issue. After wrestling with it a few minutes, he groggily thought to himself, I’ll have to take this up with the Pope in the morning. Content with the thought, his eyelids drifted closed, only to snap open a moment later. Wait a minute. I am the Pope! I guess I’d better take it up with God.

There was something so human about this incident, and John’s disarming ability to poke fun at himself, that I had to explore further. Sure enough, a quick scan of our library shelves led me to an out-of-print book our community had published, Call Me John. Released after the Pope’s death, the book is certainly a moving tribute to a remarkable spiritual leader. But it was John’s gentle humor and gift of holding himself lightly that spoke most eloquently to me.

Take, for example, his quick response to a visitor who asked how many people work at the Vatican. ‘About half,” John quipped. Or the lighthearted way he put a nervous American photographer at ease: “Would you mind sending me a picture? No one ever sends me any pictures. . . .” Or his dry comment at the end of another trying papal photo session: “The good Lord has known for seventy-seven years that I would become pope. Could he not have made me just a bit more photogenic?”

As I read, I sensed there was something more at work here than easygoing charm. The stories demonstrated both confidence and humility, a certain comfortableness with himself and security in who he was. I wondered how he had gotten to this point. Had he been born with this stuff? A trip back to the library, this time for the book Journal of a Soul, provided the answer. John’s own words showed me that through years of assiduous correspondence with grace, he had learned the secret to a happy life: losing oneself and finding God.

Born in 1881, Angelo Giuseppe—the future Saint John XXIII—was the third of thirteen children born to Marianna and Giovanni Roncalli. The Roncallis were poor farmers who lived in Sotto il Monte, near the Italian city of Bergamo. John avoided romanticizing those early years. As pope he once remarked that there were “three ways for a man to come to ruin: women, gambling, and farming. My family chose the most boring way.”

The Roncalli children grew up in a faith-filled home. It came as no surprise when Angelo, nicknamed “the little priest” by his grade school friends, asked to enter the minor seminary at age eleven. He would spend the next twelve years in study and preparation for the priesthood, which took place on August 10, 1904.

A year after his ordination, Father Roncalli became secretary to the bishop of Bergamo and was assigned to teach at the diocesan seminary. When World War I broke out in 1914, he was briefly conscripted in the army, serving as a hospital orderly and military chaplain. His service ended in 1918, and he was appointed spiritual director of the seminary at Bergamo and, three years later, National Director of the Society for the Propagation of the Faith. Beginning in 1925 and continuing over the course of twenty-eight years, he served as apostolate delegate to Bulgaria, Turkey, Greece, and France. Pope Pius XII elevated him to the College of Cardinals and appointed him archbishop of Venice in 1953.

Five years later, Cardinal Roncalli attended the solemn consistory convened after the death of Pius XII. On October 28, 1958, Roncalli was elected pope, taking the name of John XXIII. At seventy-seven years of age, he was viewed by many as a transitional pontiff. He subsequently shocked the world when, only three months into his pontificate, he announced his desire to hold an ecumenical council for the purpose of renewing the Church so that it might offer a more credible witness to the Gospel in the modern world. Reaction to the news was not altogether favorable. ‘A council in 1963?” one Vatican official asked, appalled at the amount of work that would be required in such a time frame. “We can’t possibly have a council in 1963.”

Time magazine would hail the Second Vatican Council as the single most important event of the twentieth century. John, who had conceived the idea as an inspiration from God (he sheepishly admitted that no one was more surprised by the proposal of a council than he), took no personal credit for it; he viewed himself simply as an instrument of the Divine will. As such, he was able to let go of his desire to see the work through to its completion. At the end of the Council’s opening day, he wrote in his diary, “With the same calm I repeat: May your will be done with respect to my remaining in this primary position of service for whatever time and circumstances are left of my poor life—and I feel that death may approach at any moment—because the pledge to proceed, continue, and finish [the work] will be passed on to my successor.”

Already suffering from the beginnings of stomach cancer when he wrote these words, “Good Pope John” died less than a year later, on June 3, 1963. John had offered his life for the good outcome of the Council, and the Lord was pleased to accept his offering.