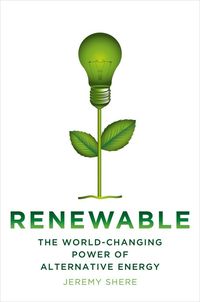 Where does the energy we use come from? It’s absolutely vital to every single thing we do every day, but for most people, it is utterly invisible. Flick a switch and the lights go on. It might as well be magic. Science writer Jeremy Shere shows us in Renewable: The World-Changing Power of Alternative Energy that energy is anything but magical. Producing it in fossil fuel form is a dirty, expensive—but also hugely profitable— enterprise, with enormous but largely hidden costs to the entire planet. The cold, hard fact is that at some point we will have wrung the planet dry of easily accessible sources of fossil fuel. And when that time comes, humankind will have no choice but to turn—or, more accurately, return—to other, cleaner, Renewable energy sources. What will those sources be? How far have we come to realizing the technologies that will make these sources available?To find the answers, Shere began his journey with a tour of a traditional coal-fueled power plant in his home state of Indiana. He then continued on, traveling from coast to coast as he spoke to scientists, scholars and innovators. He immersed himself in the green energy world: visiting a solar farm at Denver’s airport, attending the Wind Power Expo and a wind farm tour in Texas, investigating turbines deep in New York City’s East River, and much more. Arranged in five parts—Green Gas, Sun, Wind, Earth, and Water—Renewable tells the stories of the most interesting and promising types of Renewable energy.