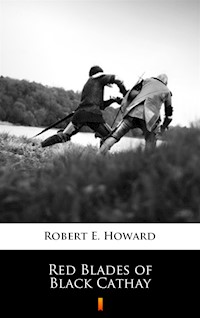 The singing of the swords was a deathly clamor in the brain of Godric de Villehard. Blood and sweat veiled his eyes and in the instant of blindness he felt a keen point pierce a joint of his hauberk and sting deep into his ribs. Smiting blindly, he felt the jarring impact that meant his sword had gone home, and snatching an instant’s grace, he flung back his vizor and wiped the redness from his eyes.

Trumpets die in the loud parade, The gray mist drinks the spears; Banners of glory sink and fade In the dust of a thousand years. Singers of pride the silence stills, The ghost of empire goes, But a song still lives in the ancient hills, And the scent of a vanished rose. Ride with us on a dim, lost road To the dawn of a distant day, When swords were bare for a guerdon rare. –The Flower of Black Cathay.

THE SINGING of the swords was a deathly clamor in the brain of Godric de Villehard. Blood and sweat veiled his eyes and in the instant of blindness he felt a keen point pierce a joint of his hauberk and sting deep into his ribs. Smiting blindly, he felt the jarring impact that meant his sword had gone home, and snatching an instant’s grace, he flung back his vizor and wiped the redness from his eyes. A single glance only was allowed him: in that glance he had a fleeting glimpse of huge, wild black mountains; of a clump of mail-clad warriors, ringed by a howling horde of human wolves; and in the center of that clump, a slim, silk-clad shape standing between a dying horse and a dying swordsman. Then the wolfish figures surged in on all sides, hacking like madmen.

“Christ and the Cross!” the old Crusading shout rose in a ghastly croak from Godric’s parched lips. As if far away he heard voices gaspingly repeat the words. Curved sabers rained on shield and helmet. Godric’s eyes blurred to the sweep of frenzied dark faces with bristling, foam-flecked beards. He fought like a man in a dream. A great weariness fettered his limbs. Somewhere–long ago it seemed–a heavy axe, shattering on his helm, had bitten through an old dent to rend the scalp beneath. He heaved his curiously weighted arm above his head and split a bearded face to the chin.

“En avant, Montferrat!” We must hack through and shatter the gates, thought the dazed brain of Godric; we can not long stand this press, but once within the city–no–these walls were not the walls of Constantinople: he was mad; he dreamed–these towering heights were the crags of a lost and nameless land and Montferrat and the Crusade lay lost in leagues and years.

Godric’s steed reared and pitched headlong, throwing his rider with a clash of armor. Under the lashing hoofs and the shower of blades, the knight struggled clear and rose, without his shield, blood starting from every joint in his armor. He reeled, bracing himself; he fought not these foes alone, but the long grinding days behind–the days and days of hard riding and ceaseless fighting.

Godric thrust upward and a man died. A scimitar shivered on his crest, and the wielder, torn from his saddle by a hand that was still iron, spilled his entrails at Godric’s feet. The rest reined in around howling, seeking to overthrow the giant Frank by sheer weight of numbers. Somewhere in the hellish din a woman’s scream knifed the air. A clatter of hoofs burst like a sudden whirlwind and the press was cleared. Through a red mist the dulling eyes of the knight saw the wolfish, skinclad assailants swept away by a sudden flood of mailed riders who hacked them down and trampled them under.

Then men were dismounting around him, men whose gaudy silvered armor, high fur kaftans and two-handed scimitars he saw as in a dream. One with thin drooping mustaches adorning his dark face spoke to him in a Turkish tongue the knight could faintly understand, but the burden of the words was unintelligible. He shook his head.

“I can not linger,” Godric said, speaking slowly and with growing difficulty, “De Montferrat awaits my report and I must–ride–East–to–find–the– kingdom–of–Prester–John - - bid–my–men–mount–”

His voice trailed off. He saw his men; they lay about in a silent, sword- gashed cluster, dead as they had lived–facing the foe. Suddenly the strength flowed from Godric de Villehard in a great surge and he fell as a blasted tree falls. The red mist closed about him, but ere it engulfed him utterly, he saw bending near him two great dark eyes, strangely soft and luminous, that filled him with formless yearning; in a world grown dim and unreal they were the one tangible reality and this vision he took with him into a nightmare realm of shadows.

Godric’s return to waking life was as abrupt as his departure. He opened his eyes to a scene of exotic splendor. He was lying on a silken couch near a wide window whose sill and bars were of chased gold. Silken cushions littered the marble floor and the walls were of mosaics where they were not worked in designs of gems and silver, and were hung with heavy tapestries of silk, satin and cloth-of-gold. The ceiling was a single lofty dome of lapis lazuli from which was suspended on golden chains a censer that shed a faint alluring scent over all. Through the window a faint breeze wafted scents of spices, roses and jasmine, and beyond Godric could see the clear blue of the Asian skies.

He tried to rise and fell back with a startled exclamation. Whence this strange weakness? The hand he lifted to his gaze was thinner than should be, and its bronze was faded. He gazed in perplexity at the silken, almost feminine garments which clothed him, and then he remembered–the long wandering, the battle, the slaughter of his men-at-arms. His heart turned sick within him as he remembered the staunch faithfulness of the men he had led to the shambles.

A tall, thin yellow man with a kindly face entered and smiled to see that he was awake and in his right mind. He spoke to the knight in several languages unknown to Godric, then used one easy to understand–a rough Turkish dialect much akin to the bastard tongue used by the Franks in their contacts with the Turanian peoples.

“What place is this?” asked Godric. “How long have I lain here?”

“You have lain here many days,” answered the other. “I am You-tai, the emperor’s man-of-healing. This is the heavenborn empire of Black Cathay. The princess Yulita has attended you with her own hands while you lay raving in delirium. Only through her care and your own marvelous natural strength have you survived. When she told the emperor how you with your small band recklessly charged and delivered her from the hands of the Hian bandits who had slain her guard and taken her prisoner, the heavenly one gave command that naught be spared to preserve you. Who are you, most noble lord? While you raved you spoke of many unknown peoples, places and battles and your appearance is such as to show that you come from afar.”

Godric laughed, and bitterness was in his laughter.

“Aye,” quoth he, “I have ridden far; the deserts have parched my lips and the mountains have wearied my feet. I have seen Trebizond in my wanderings, and Teheran and Bokhara and Samarcand. I have looked on the waters of the Black Sea and the Sea of Ravens. From Constantinople far to the west I set forth more than a year agone, riding eastward. I am a knight of Normandy, Sir Godric de Villehard.”

“I have heard of some of the places you name,” answered You-tai, “but many of them are unknown to me. Eat now, and rest. In time the princess Yulita will come to you.”

So Godric ate the curiously spiced rice, the dates and candied meats, and drank the colorless rice wine brought him by a flat-faced girl slave who wore golden bangles on her ankles, and soon slept, and sleeping, his unquenchable vitality began to assert itself.

When he awoke from that long sleep he felt refreshed and stronger, and soon the pearl-inlaid doors opened and a slight, silk-clad figure entered. Godric’s heart suddenly pounded as he again felt the soft, tender gaze of those great dark eyes upon him. He drew himself together with an effort; was he a boy to tremble before a pair of eyes, even though they adorned the face of a princess?

Long used was he to the veiled women of the Moslems, and Yulita’s creamy cheeks with her full ruby lips were like an oasis in the waste.

“I am Yulita,” the voice was soft, vibrant and musical as the silvery tinkle of the fountain in the court outside. “I wish to thank you. You are brave as Rustum. When the Hians rushed from the defiles and cut down my guard, I was afraid. You answered my screams as unexpectedly and boldly as a hero sent down from paradise. I am sorry your brave men died.”

“And I likewise,” the Norman answered with the bluntness of his race, “but it was their trade: they would not have had it otherwise and they could not have died in a better cause.”

“But why did you risk your life to aid me, who am not of your race and whom you never saw before?” she pursued.

Godric might have answered as would nine out of any ten knights in his position–with the repeating of the vow of chivalry, to protect all weaker things. But being Godric de Villehard, he shrugged his shoulders. “God knows. I should have known it was death to us all to charge that horde. I have seen too much rapine and outrage since I turned my face east to have thus thrown away my men and expedition in the ordinary course of events. Perhaps I saw at a glance you were of regal blood and followed the knight’s natural instinct to rush to the aid of royalty.”