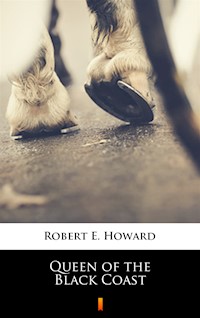 Queen of the Black Coast ebook

Hoofs drummed down the street that sloped to the wharfs. The folk that yelled and scattered had only a fleeting glimpse of a mailed figure on a black stallion, a wide scarlet cloak flowing out on the wind. Far up the street came the shout and clatter of pursuit, but the horseman did not look back. He swept out onto the wharfs and jerked the plunging stallion back on its haunches at the very lip of the pier.

I. CONAN JOINS THE PIRATES

III. THE HORROR IN THE JUNGLE

IV. THE ATTACK FROM THE AIR

I. CONAN JOINS THE PIRATES

Believe green buds awaken in the spring, That autumn paints the leaves with somber fire; Believe I held my heart inviolate To lavish on one man my hot desire. –The Song Of Belit

HOOFS drummed down the street that sloped to the wharfs. The folk that yelled and scattered had only a fleeting glimpse of a mailed figure on a black stallion, a wide scarlet cloak flowing out on the wind. Far up the street came the shout and clatter of pursuit, but the horseman did not look back. He swept out onto the wharfs and jerked the plunging stallion back on its haunches at the very lip of the pier. Seamen gaped up at him, as they stood to the sweep and striped sail of a high-prowed, broadwaisted galley. The master, sturdy and black-bearded, stood in the bows, easing her away from the piles with a boat-hook. He yelled angrily as the horseman sprang from the saddle and with a long leap landed squarely on the mid-deck.

“Who invited you aboard?”

“Get under way!” roared the intruder with a fierce gesture that spattered red drops from his broadsword.

“But we’re bound for the coasts of Kush!” expostulated the master.

“Then I’m for Kush! Push off, I tell you!” The other cast a quick glance up the street, along which a squad of horsemen were galloping; far behind them toiled a group of archers, crossbows on their shoulders.

“Can you pay for your passage?” demanded the master.

“I pay my way with steel!” roared the man in armor, brandishing the great sword that glittered bluely in the sun. “By Crom, man, if you don’t get under way, I’ll drench this galley in the blood of its crew!”

The shipmaster was a good judge of men. One glance at the dark-scarred face of the swordsman, hardened with passion, and he shouted a quick order, thrusting strongly against the piles. The galley wallowed out into clear water, the oars began to clack rhythmically; then a puff of wind filled the shimmering sail, the light ship heeled to the gust, then took her course like a swan, gathering headway as she skimmed along.

On the wharfs the riders were shaking their swords and shouting threats and commands that the ship put about, and yelling for the bowmen to hasten before the craft was out of arbalest range.

“Let them rave,” grinned the swordsman hardily. “Do you keep her on her course, master steersman.”

The master descended from the small deck between the bows, made his way between the rows of oarsmen, and mounted the mid-deck. The stranger stood there with his back to the mast, eyes narrowed alertly, sword ready. The shipman eyed him steadily, careful not to make any move toward the long knife in his belt. He saw a tall powerfully built figure in a black scale-mail hauberk, burnished greaves and a blue-steel helmet from which jutted bull’s horns highly polished. From the mailed shoulders fell the scarlet cloak, blowing in the sea-wind. A broad shagreen belt with a golden buckle held the scabbard of the broadsword he bore. Under the horned helmet a square-cut black mane contrasted with smoldering blue eyes.

“If we must travel together,” said the master, “we may as well be at peace with each other. My name is Tito, licensed mastershipman of the ports of Argos. I am bound for Kush, to trade beads and silks and sugar and brass-hilted swords to the black kings for ivory, copra, copper ore, slaves and pearls.”

The swordsman glanced back at the rapidly receding docks, where the figures still gesticulated helplessly, evidently having trouble in finding a boat swift enough to overhaul the fast-sailing galley.

“I am Conan, a Cimmerian,” he answered. “I came into Argos seeking employment, but with no wars forward, there was nothing to which I might turn my hand.”

“Why do the guardsman pursue you?” asked Tito. “Not that it’s any of my business, but I thought perhaps–”

“I’ve nothing to conceal,” replied the Cimmerian. “By Crom, though I’ve spent considerable time among you civilized peoples, your ways are still beyond my comprehension.

“Well, last night in a tavern, a captain in the king’s guard offered violence to the sweetheart of a young soldier, who naturally ran him through. But it seems there is some cursed law against killing guardsmen, and the boy and his girl fled away. It was bruited about that I was seen with them, and so today I was haled into court, and a judge asked me where the lad had gone. I replied that since he was a friend of mine, I could not betray him. Then the court waxed wroth, and the judge talked a great deal about my duty to the state, and society, and other things I did not understand, and bade me tell where my friend had flown. By this time I was becoming wrathful myself, for I had explained my position.

“But I choked my ire and held my peace, and the judge squalled that I had shown contempt for the court, and that I should be hurled into a dungeon to rot until I betrayed my friend. So then, seeing they were all mad, I drew my sword and cleft the judge’s skull; then I cut my way out of the court, and seeing the high constable’s stallion tied near by, I rode for the wharfs, where I thought to find a ship bound for foreign ports.”

“Well,” said Tito hardily, “the courts have fleeced me too often in suits with rich merchants for me to owe them any love. I’ll have questions to answer if I ever anchor in that port again, but I can prove I acted under compulsion. You may as well put up your sword. We’re peaceable sailors, and have nothing against you. Besides, it’s as well to have a fighting-man like yourself on board. Come up to the poop-deck and we’ll have a tankard of ale.”

The Argus was a small sturdy ship, typical of those trading-craft which ply between the ports of Zingara and Argos and the southern coasts, hugging the shoreline and seldom venturing far into the open ocean. It was high of stern, with a tall curving prow; broad in the waist, sloping beautifully to stem and stern. It was guided by the long sweep from the poop, and propulsion was furnished mainly by the broad striped silk sail, aided by a jibsail. The oars were for use in tacking out of creeks and bays, and during calms. There were ten to the side, five fore and five aft of the small mid-deck. The most precious part of the cargo was lashed under this deck, and under the fore-deck. The men slept on deck or between the rowers’ benches, protected in bad weather by canopies. With twenty men at the oars, three at the sweep, and the shipmaster, the crew was complete.

So the Argus pushed steadily southward, with consistently fair weather. The sun beat down from day to day with fiercer heat, and the canopies were run up–striped silken cloths that matched the shimmering sail and the shining goldwork on the prow and along the gunwales.

They sighted the coast of Shem–long rolling meadowlands with the white crowns of the towers of cities in the distance, and horsemen with blue- black beards and hooked noses, who sat their steeds along the shore and eyed the galley with suspicion. She did not put in; there was scant profit in trade with the sons of Shem.

Nor did master Tito pull into the broad bay where the Styx river emptied its gigantic flood into the ocean, and the massive black castles of Khemi loomed over the blue waters. Ships did not put unasked into this port, where dusky sorcerers wove awful spells in the murk of sacrificial smoke mounting eternally from blood-stained altars where naked women screamed, and where Set, the Old Serpent, arch-demon of the Hyborians but god of the Stygians, was said to writhe his shining coils among his worshippers.

Master Tito gave that dreamy glass-floored bay a wide berth, even when a serpent-prowed gondola shot from behind a castellated point of land, and naked dusky women, with great red blossoms in their hair, stood and called to his sailors, and posed and postured brazenly.

Now no more shining towers rose inland. They had passed the southern borders of Stygia and were cruising along the coasts of Kush. The sea and the ways of the sea were neverending mysteries to Conan, whose homeland was among the high hills of the northern uplands. The wanderer was no less of interest to the sturdy seamen, few of whom had ever seen one of his race.

They were characteristic Argossean sailors, short and stockily built. Conan towered above them, and no two of them could match his strength. They were hardy and robust, but his was the endurance and vitality of a wolf, his thews steeled and his nerves whetted by the hardness of his life in the world’s wastelands. He was quick to laugh, quick and terrible in his wrath. He was a valiant trencherman, and strong drink was a passion and a weakness with him. Naive as a child in many ways, unfamiliar with the sophistry of civilization, he was naturally intelligent, jealous of his rights, and dangerous as a hungry tiger. Young in years, he was hardened in warfare and wandering, and his sojourns in many lands were evident in his apparel. His horned helmet was such as was worn by the golden-haired Aesir of Nordheim; his hauberk and greaves were of the finest workmanship of Koth; the fine ring-mail which sheathed his arms and legs was of Nemedia; the blade at his girdle was a great Aquilonian broadsword; and his gorgeous scarlet cloak could have been spun nowhere but in Ophir.

So they beat southward, and master Tito began to look for the high-walled villages of the black people. But they found only smoking ruins on the shore of a bay, littered with naked black bodies. Tito swore.

“I had good trade here, aforetime. This is the work of pirates.”

“And if we meet them?” Conan loosened his great blade in its scabbard.

“Mine is no warship. We run, not fight. Yet if it came to a pinch, we have beaten off reavers before, and might do it again; unless it were Belit’s Tigress.”