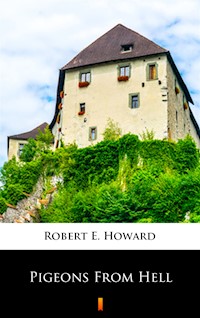 Pigeons From Hell is a short story by Robert E. Howard written in late 1934 and published posthumously by Weird Tales in 1938. The story title derives from an image present in many of Howard’s grandmother’s ghost stories, that of an old deserted plantation mansion haunted by ghostly pigeons.

1. THE WHISTLER IN THE DARK

1. THE WHISTLER IN THE DARK

GRISWELL awoke suddenly, every nerve tingling with a premonition of imminent peril. He stared about wildly, unable at first to remember where he was, or what he was doing there. Moonlight filtered in through the dusty windows, and the great empty room with its lofty ceiling and gaping black fireplace was spectral and unfamiliar. Then as he emerged from the clinging cobwebs of his recent sleep, he remembered where he was and how he came to be there. He twisted his head and stared at his companion, sleeping on the floor near him. John Branner was but a vaguely bulking shape in the darkness that the moon scarcely grayed.

Griswell tried to remember what had awakened him. There was no sound in the house, no sound outside except the mournful hoot of an owl, far away in the piny woods. Now he had captured the illusive memory. It was a dream, a nightmare so filled with dim terror that it had frightened him awake. Recollection flooded back, vividly etching the abominable vision.

Or was it a dream? Certainly it must have been, but it had blended so curiously with recent actual events that it was difficult to know where reality left off and fantasy began.

Dreaming, he had seemed to relive his past few waking hours, in accurate detail. The dream had begun, abruptly, as he and John Branner came in sight of the house where they now lay. They had come rattling and bouncing over the stumpy, uneven old road that led through the pinelands, he and John Branner, wandering far afield from their New England home, in search of vacation pleasure. They had sighted the old house with its balustraded galleries rising amidst a wilderness of weeds and bushes, just as the sun was setting behind it. It dominated their fancy, rearing black and stark and gaunt against the low lurid rampart of sunset, barred by the black pines.

They were tired, sick of bumping and pounding all day over woodland roads. The old deserted house stimulated their imagination with its suggestion of antebellum splendor and ultimate decay. They left the automobile beside the rutty road, and as they went up the winding walk of crumbling bricks, almost lost in the tangle of rank growth, pigeons rose from the balustrades in a fluttering, feathery crowd and swept away with a low thunder of beating wings.

The oaken door sagged on broken hinges. Dust lay thick on the floor of the wide, dim hallway, on the broad steps of the stair that mounted up from the hall. They turned into a door opposite the landing, and entered a large room, empty, dusty, with cobwebs shining thickly in the corners. Dust lay thick over the ashes in the great fireplace.

They discussed gathering wood and building a fire, but decided against it. As the sun sank, darkness came quickly, the thick, black, absolute darkness of the pinelands. They knew that rattlesnakes and copperheads haunted Southern forests, and they did not care to go groping for firewood in the dark. They ate frugally from tins, then rolled in their blankets fully clad before the empty fireplace, and went instantly to sleep.

This, in part, was what Griswell had dreamed. He saw again the gaunt house looming stark against the crimson sunset; saw the flight of the pigeons as he and Branner came up the shattered walk. He saw the dim room in which they presently lay, and he saw the two forms that were himself and his companion, lying wrapped in their blankets on the dusty floor. Then from that point his dream altered subtly, passed out of the realm of the commonplace and became tinged with fear. He was looking into a vague, shadowy chamber, lit by the gray light of the moon which streamed in from some obscure source. For there was no window in that room. But in the gray light he saw three silent shapes that hung suspended in a row, and their stillness and their outlines woke chill horror in his soul. There was no sound, no word, but he sensed a Presence of fear and lunacy crouching in a dark corner... Abruptly he was back in the dusty, high-ceilinged room, before the great fireplace.

He was lying in his blankets, staring tensely through the dim door and across the shadowy hall, to where a beam of moonlight fell across the balustraded stair, some seven steps up from the landing. And there was something on the stair, a bent, misshapen, shadowy thing that never moved fully into the beam of light. But a dim yellow blur that might have been a face was turned toward him, as if something crouched on the stair, regarding him and his companion. Fright crept chilly through his veins, and it was then that he awoke –if indeed he had been asleep.

He blinked his eyes. The beam of moonlight fell across the stair just as he had dreamed it did; but no figure lurked there. Yet his flesh still crawled from the fear the dream or vision had roused in him; his legs felt as if they had been plunged in ice-water. He made an involuntary movement to awaken his companion, when a sudden sound paralyzed him.

It was the sound of whistling on the floor above. Eery and sweet it rose, not carrying any tune, but piping shrill and melodious. Such a sound in a supposedly deserted house was alarming enough; but it was more than the fear of a physical invader that held Griswell frozen. He could not himself have defined the horror that gripped him. But Branner’s blankets rustled, and Griswell saw he was sitting upright. His figure bulked dimly in the soft darkness, the head turned toward the stair as if the man were listening intently. More sweetly and more subtly evil rose that weird whistling.

“John!” whispered Griswell from dry lips. He had meant to shout–to tell Branner that there was somebody upstairs, somebody who could mean them no good; that they must leave the house at once. But his voice died dryly in his throat.

Branner had risen. His boots clumped on the floor as he moved toward the door. He stalked leisurely into the hall and made for the lower landing, merging with the shadows that clustered black about the stair.

Griswell lay incapable of movement, his mind a whirl of bewilderment. Who was that whistling upstairs? Why was Branner going up those stairs? Griswell saw him pass the spot where the moonlight rested, saw his head tilted back as if he were looking at something Griswell could not see, above and beyond the stair. But his face was like that of a sleepwalker. He moved across the bar of moonlight and vanished from Griswell’s view, even as the latter tried to shout to him to come back. A ghastly whisper was the only result of his effort.

The whistling sank to a lower note, died out. Griswell heard the stairs creaking under Branner’s measured tread. Now he had reached the hallway above, for Griswell heard the clump of his feet moving along it. Suddenly the footfalls halted, and the whole night seemed to hold its breath. Then an awful scream split the stillness, and Griswell started up, echoing the cry.

The strange paralysis that had held him was broken. He took a step toward the door, then checked himself. The footfalls were resumed. Branner was coming back. He was not running. The tread was even more deliberate and measured than before. Now the stairs began to creak again. A groping hand, moving along the balustrade, came into the bar of moonlight; then another, and a ghastly thrill went through Griswell as he saw that the other hand gripped a hatchet–a hatchet which dripped blackly. Was that Branner who was coming down that stair?

Yes! The figure had moved into the bar of moonlight now, and Griswell recognized it. Then he saw Branner’s face, and a shriek burst from Griswell’s lips. Branner’s face was bloodless, corpse-like; gouts of blood dripped darkly down it; his eyes were glassy and set, and blood oozed from the great gash which cleft the crown of his head!

Griswell never remembered exactly how he got out of that accursed house. Afterward he retained a mad, confused impression of smashing his way through a dusty cobwebbed window, of stumbling blindly across the weed-choked lawn, gibbering his frantic horror. He saw the black wall of the pines, and the moon floating in a blood-red mist in which there was neither sanity nor reason.

Some shred of sanity returned to him as he saw the automobile beside the road. In a world gone suddenly mad, that was an object reflecting prosaic reality; but even as he reached for the door, a dry chilling whir sounded in his ears, and he recoiled from the swaying undulating shape that arched up from its scaly coils on the driver’s seat and hissed sibilantly at him, darting a forked tongue in the moonlight.

With a sob of horror he turned and fled down the road, as a man runs in a nightmare. He ran without purpose or reason. His numbed brain was incapable of conscious thought. He merely obeyed the blind primitive urge to run–run –run until he fell exhausted.

The black walls of the pines flowed endlessly past him; so he was seized with the illusion that he was getting nowhere. But presently a sound penetrated the fog of his terror–the steady, inexorable patter of feet behind him. Turning his head, he saw something loping after him–wolf or dog, he could not tell which, but its eyes glowed like balls of green fire. With a gasp he increased his speed, reeled around a bend in the road, and heard a horse snort; saw it rear and heard its rider curse; saw the gleam of blue steel in the man’s lifted hand.

He staggered and fell, catching at the rider’s stirrup.