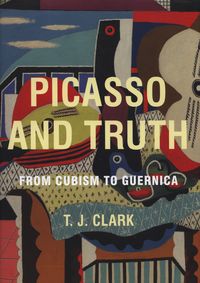 Picasso and Truth offers a breathtaking and original new look at the most significant artist of the modern era. From Pablo Picasso's early The Blue Room to the later Guernica, eminent art historian T. J. Clark offers a striking reassessment of the artist's paintings from the 1920s and 1930s. Why was the space of a room so basic to Picasso's worldview? And what happened to his art when he began to feel that room-space become too confined--too little exposed to the catastrophes of the twentieth century? Clark explores the role of space and the interior, and the battle between intimacy and monstrosity, in Picasso's art. Based on the A. W. Mellon Lectures in the Fine Arts delivered at the National Gallery of Art, this lavishly illustrated volume remedies the biographical and idolatrous tendencies of most studies on Picasso, reasserting the structure and substance of the artist's work.

With compelling insight, Clark focuses on three central works--the large-scale Guitar and Mandolin on a Table (1924), The Three Dancers (1925), and The Painter and His Model (1927)--and explores Picasso's answer to Nietzsche's belief that the age-old commitment to truth was imploding in modern European culture. Masterful in its historical contextualization, Picasso and Truth rescues Picasso from the celebrity culture that trivializes his accomplishments and returns us to the tragic vision of his art--humane and appalling, naive and difficult, in mourning for a lost nineteenth century, yet utterly exposed to the hell of Europe between the wars.