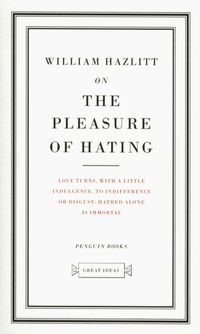 On the Pleasure of Hating książka papierowa

Love turns, with a little indulgence, to indifference or disgust: hatred alone is immortal'
William Hazlitt

William Hazlitt's tough, combative writings on subjects ranging from slavery to the imagination, boxing matches to the monarchy, established him as one of the greatest radicals of his age and have inspired journalists and political satirists ever since.