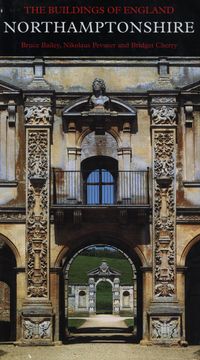 Some of England's grandest country houses are to be found in this prosperous rural county. The Elizabethan Renaissance Kirby Hall, the Jacobean mansion at Apethorpe, the late 17th-century French-inspired Boughton, Hawksmoor's stately Baroque Easton Neston, and the interiors of Althorp provide a fascinating survey of changing taste through the centuries. Complementing them are smaller buildings of great character, supreme among them those of Sir Thomas Tresham: the eccentric and ingenious Triangular Lodge at Rushton and the evocative New Beild at Lyveden. Of no less interest are the fine churches, from Anglo-Saxon Brixworth to the noble Gothic of Warmington, Rushden and Finedon and from All Saints, Northampton, one of the grandest 17th-century churches outside London, to Comper’s St. Mary’s, Wellingborough. Chief among the towns, Northampton has not only distinguished Victorian and Edwardian public, commercial and industrial buildings but also the principal work in England by Charles Rennie Mackintosh.