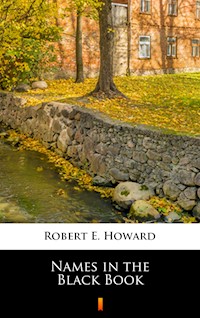 Names in the Black Book ebook

Three unsolved murders in a week are not so unusual--for River Street, grunted Steve Harrison, shifting his muscular bulk restlessly in his chair. His companion lighted a cigarette and Harrison observed that her slim hand was none too steady. She was exotically beautiful, a dark, supple figure, with the rich colors of purple Eastern nights and crimson dawns in her dusky hair and red lips. But in her dark eyes Harrison glimpsed the shadow of fear. Only once before had he seen fear in those marvelous eyes, and the memory made him vaguely uneasy.

“THREE unsolved murders in a week are not so unusual–for River Street,” grunted Steve Harrison, shifting his muscular bulk restlessly in his chair.

His companion lighted a cigarette and Harrison observed that her slim hand was none too steady. She was exotically beautiful, a dark, supple figure, with the rich colors of purple Eastern nights and crimson dawns in her dusky hair and red lips. But in her dark eyes Harrison glimpsed the shadow of fear. Only once before had he seen fear in those marvelous eyes, and the memory made him vaguely uneasy.

“It’s your business to solve murders,” she said.

“Give me a little time. You can’t rush things, when you’re dealing with the people of the Oriental quarter.”

“You have less time than you think,” she answered cryptically. “If you do not listen to me, you’ll never solve these killings.”

“But you won’t believe. You’ll say I’m hysterical–seeing ghosts and shying at shadows.”

“Look here, Joan,” he exclaimed impatiently. “Come to the point. You called me to your apartment and I came because you said you were in deadly danger. But now you’re talking riddles about three men who were killed last week. Spill it plain, won’t you?”

“Do you remember Erlik Khan?” she asked abruptly.

Involuntarily his hand sought his face, where a thin scar ran from temple to jaw-rim.

“I’m not likely to forget him,” he said. “A Mongol who called himself Lord of the Dead. His idea was to combine all the Oriental criminal societies in America in one big organization, with himself at the head. He might have done it, too, if his own men hadn’t turned on him.”

“Erlik Khan has returned,” she said.

“What!” His head jerked up and he glared at her incredulously. “What are you talking about? I saw him die, and so did you!”

“I saw his hood fall apart as Ali ibn Suleyman struck with his keen-edged scimitar,” she answered. “I saw him roll to the floor and lie still. And then the house went up in flames, and the roof fell in, and only charred bones were ever found among the ashes. Nevertheless, Erlik Khan has returned.”

Harrison did not reply, but sat waiting for further disclosures, sure they would come in an indirect way. Joan La Tour was half Oriental, and partook of many of the characteristics of her subtle kin.

“How did those three men die?” she asked, though he was aware that she knew as well as he.

“Li-chin, the Chinese merchant, fell from his own roof,” he grunted. The people on the street heard him scream and then saw him come hurtling down. Might have been an accident–but middle-aged Chinese merchants don’t go climbing around on roofs at midnight.

“Ibrahim ibn Achmet, the Syrian curio dealer, was bitten by a cobra. That might have been an accident too, only I know somebody dropped the snake on him through his skylight.

“Jacob Kossova, the Levantine exporter, was simply knifed in a back alley. Dirty jobs, all of them, and no apparent motive on the surface. But motives are hidden deep, in River Street. When I find the guilty parties I’ll uncover the motives.”

“And these murders suggest nothing to you?” exclaimed the girl, tense with suppressed excitement. “You do not see the link that connects them? You do not grasp the point they all have in common? Listen–all these men were formerly associated in one way or another with Erlik Khan!”

“Well?” he demanded. “That doesn’t mean that the Khan’s spook killed them! We found plenty of bones in the ashes of the house, but there were members of his gang in other parts of the city. His gigantic organization went to pieces, after his death, for lack of a leader, but the survivors were never uncovered. Some of them might be paying off old grudges.”

“Then why did they wait so long to strike? It’s been a year since we saw Erlik Khan die. I tell you, the Lord of the Dead himself, alive or dead, has returned and is striking down these men for one reason or another. Perhaps they refuse to do his bidding once more. Five were marked for death. Three have fallen.”

“Look!” From beneath the cushions of the divan on which she sat she drew something, and rising, came and bent beside him while she unfolded it.

It was a square piece of parchment-like substance, black and glossy. On it were written five names, one below the other, in a bold flowing hand–and in crimson, like spilled blood. Through the first three names a crimson bar had been drawn. They were the names of Li-chin, Ibrahim ibn Achmet, and Jacob Kossova. Harrison grunted explosively. The last two names, as yet unmarred, were those of Joan La Tour and Stephen Harrison.

“Where did you get this?” he demanded.

“It was shoved under my door last night, while I slept. If all the doors and windows had not been locked, the police would have found it pinned to my corpse this morning.”

“But still I don’t see what connection–”

“It is a page from the Black Book of Erlik Khan!” she cried. “The book of the dead! I have seen it, when I was a subject of his in the old days. There he kept accounts of his enemies, alive and dead. I saw that book, open, the very day of the night Ali ibn Suleyman killed him–a big book with jade-hinged ebony covers and glossy black parchment pages. Those names were not in it then; they have been written in since Erlik Khan died–and that is Erlik Khan’s handwriting!”

If Harrison was impressed he failed to show it.

“Does he keep his books in English?”