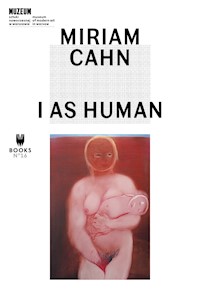 MIRIAM CAHN: I AS HUMAN ebook

Known for her drawings and paintings, Swiss artist Miriam Cahn also experiments with photography, moving images, and sculptures. For over four decades the artist has been bearing witness to social conflicts, crises and emergencies, contemplating the contemporary human condition and the agency of painting vis-à-vis such subjects as war and violence, sexuality, nature, family relationships, and death. Cahn’s rich oeuvre, which includes not only painting, but also drawing, performance, text, and film is based on uncompromising resistance to all forms of violence and therefore is very relevant today. Her diverse body of work is disturbing and dreamlike, filled with striking human figures pulsing with an energy that is both passionate and violent.

This e-book is available for readers in Poland, for worldwide distribution please check the University of Chicago Press.

Documents of a Journey

The “It” in the “I”: Miriam Cahn and the Confessions of an Impersonal Subject

The Writing of Women’s Bodies

“In My Work, Each Day Is Important”:Conversation with Miriam Cahn

In the Meantime: Thinking with Miriam Cahn for a Retrospective Exhibition

Miriam Cahn’s diverse body of work and her longstanding and resolute, radical approach to art has cemented her position as one of the major artists of her generation. In 2017, a wide international audience was swept away by her “tangibly great” documenta 14 presentations in Athens and Kassel. In 2019, the Kunstmuseum Bern, the Haus der Kunst, Munich, and the Museum of Modern Art in Warsaw have come together to cooperate on a large retrospective exhibition titled MIRIAM CAHN: I AS HUMAN, while at the same time, the Museo Nacional Centro de Arte Reina Sofía in Madrid is showcasing MIRIAM CAHN: everything is equally important. We have joined forces to make this edition of essays come to life; it is meant to expand the critical reading of Miriam Cahn’s oeuvre within a broad framework of theoretical perspectives.

Since Miriam Cahn began working as an artist, reflection on her artistic expression, on the media she uses, and on their historical precursors runs parallel to her own critical reaction to political and social events in which existential questions become tangible. The 1980s brought the feminist, peace, and environmental movements to wider consciousness; in the 1990s Cahn reflected on the Gulf and Yugoslav Wars and how they were treated in the media, and, in recent years, on the reactions to the European refugee crisis and the #MeToo movement.

In the late 1970s, Cahn underscored her claim to the public sphere with graphic interventions in public spaces, and appropriated new formats, surfaces, or supports, as well as publishing outlets. She did this through a “genre,” drawing, that previously had been condescendingly smiled upon and seen as subordinate to painting. She also made good the feminist motto that “the personal is political” and becomes a matter of public interest. Due to these activities, Cahn acquired artistic fame in Switzerland, and through Swiss art historian and curator Jean-Christophe Ammann was highlighted as an important protagonist among a generation of young artists in Basel.

Cahn’s characteristic mode of representing the frontal gaze is emphasized by her use of radiant colors. As in her previous work, she gives form and shape to what is relevant to her.

Now, however, her works “stare” all the more intensely at the beholder. In this way, Cahn realizes an impossible stance in feminist theory: that of returning the female gaze, which cancels out art-historical power structures.

Her oeuvre is marked by her untiring exploration of artistic possibilities. And even though she is primarily renowned for her drawings and paintings, she experiments to an equal degree with photography, imprints, overpainting, moving images, and sculpture. She practices interdisciplinarity, intermediality, and performativity in a unique and distinctive way.

The manner in which she uses media, however, is always committed to her uncompromising attitude, which feeds on fundamental issues. They are: Who am I? What is art if my role models are male artists? Who am I as a female artist? What does it mean to be a woman? How can beauty and destruction or violence be reconciled in one and the same picture? What happens when the naked woman—the ultimate voyeuristic object—gazes back at the beholder? To what extent are painting and drawing suited for the representation of current political problems?

There is no way for me to look at or write about Miriam Cahn’s work other than with a series of questions. Since my first encounter with her paintings and then in person, later with her exhibitions and her ever-new, ceaselessly created works, I have been unable to reach a full stop and am left only with question marks: What does Miriam Cahn look at? What does she see?

Her drawings are violent, quivering, and unstable (initially she created them in public spaces), as if she were looking for immediate commentary, a device to convey the dynamic of the reality that unfolds in front of her eyes, the pageant of images, the flurry of thoughts, the cacophony of time experienced. Created on the floor, drawn with her whole body, often with her eyes closed, and dictated by biological rhythms, Cahn’s works seem to be a way of suspending interpretation, a relinquishing of control and safe distance, and a way of marking her real (female) presence.

Besides the “object” (more or less individual), the frame in her films includes the breathing, the trembling, and the tiredness of the filmmaker.

Her photographs, most often black and white, are interested in the fragment, as if the wide angle did not exist (unless they are images of nature, of the mountains, the lakes—but these are only ever partial). Like the artist’s erratic gaze, they seem to hop from set to set, from the garden onto the street, from television scenes to those from memory, back and forth, inside and outside.

Her disturbing, oneiric paintings sparkle with colors and show figures with blurred contours, coarse facial features, and grotesquely exaggerated private parts. Despite their frontal, strong presence in the frame, the figures (people, animals) seem absent, distant, and empty—reminiscent of meandering abandoned shadows. Sporadic details appear and mark the points of tension or identity: genitals (most often erect); hollow, vacant eyes; clenched fists. Exhibited so the eyes of the protagonists are level with the eyes of the viewers, Cahn’s paintings often act as sinister mirrors.

The titles of the works use either no capital letters, or only capital letters, as if suspending specificity to create a form of generalization: “chernobyl,” “sarajevo,” “hiroshima,” “HANDS UP!,” “world trade center,” “MARE NOSTRUM” could be/are anywhere, at any time.

Her texts—correspondence, notes, poems—are written in rage. Often, they are precise, dense, clearly positioned sentences that do not take no for an answer. At other times, equally short, they are delicate, uncertain, filled with conditionals, suspension points, and pauses.

Does this bring us any closer to answering the questions of what Miriam Cahn looks at and what she sees? Partly. Is this a good way of defining the engine of her work? Probably not. Are these sufficient grounds to establish the stakes of her work? Barely.

The book MIRIAM CAHN: I AS HUMAN looks at this oeuvre from several vantage points. Kathleen Bühler and Adam Szymczyk view it from the biographical perspective, as we are all entangled—consciously or not—in various broader or narrower historical planes. Natalia Sielewicz, while reading the images and looking at the texts, attentively observes the strategies and stakes of the works of an artist: a woman who in her art ruptures the notions of stable subjectivity, who inhabits the shifting perspectives of “I”. Based on her research on patriarchal violence, anthropologist and feminist Rita Segato looks at wounded women’s bodies in Cahn’s oeuvre and invites us to rethink the idea of minoritarian politics. Jakub Momro movingly writes about the shock of an encounter, seeing as experience, image-thought, and Cahn’s work in the context of the intensities that create it/that it creates. Éric de Chassey, on the other hand, writes about the tension between figuration and abstraction: the mixture of distance, immediacy and truth; about performativity; and about the deeply political dimension of Cahn’s work. The artist herself comments on these issues with eloquence and conviction in a conversation with Patricia Falguières, Élisabeth Lebovici, and Nataša Petrešin-Bachelez, held in 2014 at the “Something You Should Know: Artists and Producers Today” seminar at the School for Advanced Studies in the Social Sciences in Paris (EHESS). Ana Ara and Fernando López talk about their discussions with the artist and the preparations for her solo show at the Museo Nacional Centro de Arte Reina Sofía in Madrid.

An intense word-image, whose force, painterly energy, and passion are like a verbal mirror to the works of Miriam Cahn, is furnished by Paul B. Preciado. In my own contribution, I read Cahn’s work alongside the devastating text of the Austrian writer and poet Christine Lavant, and in so doing I again attempt to track Cahn’s gaze, circling around the same set of questions that drew me to work on this book and the exhibition.

The image section of this volume gives voice to the artist herself. The first part of the book features selected works from the artist’s exhibition MIRIAM CAHN: I AS HUMAN, which is traveling in 2019 through Bern, Munich, and Warsaw. In the last part of the book, we reproduce, in the order suggested by the artist, a group of her photographs taken in different periods of her artistic practice. This is another attempt to follow her gaze.

In this space where we have been matching images with words (or creating word-images), the work on this book was a double task of accompanying in discovery: the authors/viewers as we confronted and then met—in various ways and in various places—the work of Miriam Cahn. It was also a way of accompanying Miriam herself, as she read—sometimes tenderly, at other times anxiously, then again disapprovingly, but always with curiosity—her own work.It is as if we all have been in the presence of something that constantly eludes us and MIRIAM CAHN: I AS HUMAN captures that something only incompletely. This book is nothing more than a beginning; an attentive contemplation of Cahn’s work—work that is heterogeneous, restless, and full of extreme emotions that coincide with our everyday lives: ourselves, as humans.

I want to express my deep gratitude to Miriam and the authors. Working on this book with you was an important journey and a truly rich adventure.

Kathleen Bühler is a film scholar and contemporary art curator based in Zürich. Her curatorial and research interests focus on the role of memory and perception in the construction of identity in moving images and other visual media. She studied at the University of Zürich and completed her PhD in film history on the experimental films of Carolee Schneemann (published by Schüren Verlag, Marburg, 2009). Since 2008, she has been a curator of contemporary art at the Kunstmuseum Bern. In that position she has curated shows of work by Tracey Emin (2009), Yves Netzhammer (2010), Thomas Hirschhorn (2011), Berlinde De Bruyckere (2011), Zarina Bhimji (2012), Bill Viola (2014), and Bethan Huws (2014). She is also the curator of MIRIAM CAHN: I AS HUMAN at the Kunstmuseum Bern (2019). She was presented with the Swiss Exhibition Award 2011 for the exhibition Dislocación: Cultural Location and Identity in Times of Globalization. From 2002 to 2007 she wrote art criticism for the Neue Zürcher Zeitung. She has published texts on contemporary art in newspapers, art magazines, catalogs, and artist’s books.