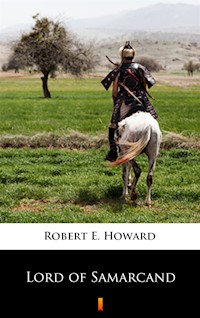 The Turks, cruelly lead by the scurrilous Bayazid, crushingly defeat a bunch of European Christians who were invading so as to steal land from the Turks, or something. But one of the Europeans, a Scott, Donald MacDeesa escapes with his life and hooks up with Ak Boga, who who had secretly been spying on the carnage. Ak Boga works for the Amir of Samarcand, one Timour the Lame.

THE ROAR of battle had died away; the sun hung like a ball of crimson gold on the western hills. Across the trampled field of battle no squadrons thundered, no war-cry reverberated. Only the shrieks of the wounded and the moans of the dying rose to the circling vultures whose black wings swept closer and closer until they brushed the pallid faces in their flight.

On his rangy stallion, in a hillside thicket, Ak Boga the Tatar watched, as he had watched since dawn, when the mailed hosts of the Franks, with their forest of lances and flaming pennons, had moved out on the plains of Nicopolis to meet the grim hordes of Bayazid.

Ak Boga, watching their battle array, had chk-chk’d his teeth in surprize and disapproval as he saw the glittering squadrons of mounted knights draw out in front of the compact masses of stalwart infantry, and lead the advance. They were the flower of Europe–cavaliers of Austria, Germany, France and Italy; but Ak Boga shook his head.

He had seen the knights charge with a thunderous roar that shook the heavens, had seen them smite the outriders of Bayazid like a withering blast and sweep up the long slope in the teeth of a raking fire from the Turkish archers at the crest. He had seen them cut down the archers like ripe corn, and launch their whole power against the oncoming spahis, the Turkish light cavalry. And he had seen the spahis buckle and break and scatter like spray before a storm, the light-armed riders flinging aside their lances and spurring like mad out of the melee. But Ak Boga had looked back, where, far behind, the sturdy Hungarian pikemen toiled, seeking to keep within supporting distance of the headlong cavaliers.

He had seen the Frankish horsemen sweep on, reckless of their horses’ strength as of their own lives, and cross the ridge. From his vantage-point Ak Boga could see both sides of that ridge and he knew that there lay the main power of the Turkish army–sixty-five thousand strong–the janizaries, the terrible Ottoman infantry, supported by the heavy cavalry, tall men in strong armor, bearing spears and powerful bows.

And now the Franks realized, what Ak Boga had known, that the real battle lay before them; and their horses were weary, their lances broken, their throats choked with dust and thirst.

Ak Boga had seen them waver and look back for the Hungarian infantry; but it was out of sight over the ridge, and in desperation the knights hurled themselves on the massed enemy, striving to break the ranks by sheer ferocity. That charge never reached the grim lines. Instead a storm of arrows broke the Christian front, and this time, on exhausted horses, there was no riding against it. The whole first rank went down, horses and men pincushioned, and in that red shambles their comrades behind them stumbled and fell headlong. And then the janizaries charged with a deep-toned roar of “Allah!” that was like the thunder of deep surf.

All this Ak Boga had seen; had seen, too, the inglorious flight of some of the knights, the ferocious resistance of others. On foot, leaguered and outnumbered, they fought with sword and ax, falling one by one, while the tide of battle flowed around them on either side and the blood-drunken Turks fell upon the infantry which had just toiled into sight over the ridge.

There, too, was disaster. Flying knights thundered through the ranks of the Wallachians, and these broke and retired in ragged disorder. The Hungarians and Bavarians received the brunt of the Turkish onslaught, staggered and fell back stubbornly, contesting every foot, but unable to check the victorious flood of Moslem fury.

And now, as Ak Boga scanned the field, he no longer saw the serried lines of the pikemen and ax-fighters. They had fought their way back over the ridge and were in full, though ordered, retreat, and the Turks had come back to loot the dead and mutilate the dying. Such knights as had not fallen or broken away in flight, had flung down the hopeless sword and surrendered. Among the trees on the farther side of the vale, the main Turkish host was clustered, and even Ak Boga shivered a trifle at the screams which rose where Bayazid’s swordsmen were butchering the captives. Nearer at hand ran ghoulish figures, swift and furtive, pausing briefly over each heap of corpses; here and there gaunt dervishes with foam on their beards and madness in their eyes plied their knives on writhing victims who screamed for death.

“Erlik!” muttered Ak Boga. “They boasted that they could hold up the sky on their lances, were it to fall, and lo, the sky has fallen and their host is meat for the ravens!”

He reined his horse away through the thicket; there might be good plunder among the plumed and corseleted dead, but Ak Boga had come hither on a mission which was yet to be completed. But even as he emerged from the thicket, he saw a prize no Tatar could forego–a tall Turkish steed with an ornate high-peaked Turkish saddle came racing by. Ak Boga spurred quickly forward and caught the flying, silver-worked rein. Then, leading the restive charger, he trotted swiftly down the slope away from the battlefield.

Suddenly he reined in among a clump of stunted trees. The hurricane of strife, slaughter and pursuit had cast its spray on this side of the ridge. Before him Ak Boga saw a tall, richly clad knight grunting and cursing as he sought to hobble along using his broken lance as a crutch. His helmet was gone, revealing a blond head and a florid choleric face. Not far away lay a dead horse, an arrow protruding from its ribs.

As Ak Boga watched, the big knight stumbled and fell with a scorching oath. Then from the bushes came a man such as Ak Boga had never seen before, even among the Franks. This man was taller than Ak Boga, who was a big man, and his stride was like that of a gaunt gray wolf. He was bareheaded, a tousled shock of tawny hair topping a sinister scarred face, burnt dark by the sun, and his eyes were cold as gray icy steel. The great sword he trailed was crimson to the hilt, his rusty scale-mail shirt hacked and rent, the kilt beneath it torn and slashed. His right arm was stained to the elbow, and blood dripped sluggishly from a deep gash in his left forearm.

“Devil take all!” growled the crippled knight in Norman French, which Ak Boga understood; “this is the end of the world!”

“Only the end of a horde of fools,” the tall Frank’s voice was hard and cold, like the rasp of a sword in its scabbard.

The lame man swore again. “Stand not there like a blockhead, fool! Catch me a horse! My damnable steed caught a shaft in its cursed hide, and though I spurred it until the blood spurted over my heels, it fell at last, and I think, broke my ankle.”

The tall one dropped his sword-point to the earth and stared at the other somberly.

“You give commands as though you sat in your own fief of Saxony, Lord Baron Frederik! But for you and divers other fools, we had cracked Bayazid like a nut this day.”

“Dog!” roared the baron, his intolerant face purpling; “this insolence to me? I’ll have you flayed alive!”

“Who but you cried down the Elector in council?” snarled the other, his eyes glittering dangerously. “Who called Sigismund of Hungary a fool because he urged that the lord allow him to lead the assault with his infantry? And who but you had the ear of that young fool High Constable of France, Philip of Artois, so that in the end he led the charge that ruined us all, nor would wait on the ridge for support from the Hungarians? And now you, who turned tail quicker than any when you saw what your folly had done, you bid me fetch you a horse!”

“Aye, and quickly, you Scottish dog!” screamed the baron, convulsed with fury. “You shall answer for this–”

“I’ll answer here,” growled the Scotsman, his manner changing murderously. “You have heaped insults on me since we first sighted the Danube. If I’m to die, I’ll settle one score first!”

“Traitor!” bellowed the baron, whitening, scrambling up on his knee and reaching for his sword. But even as he did so, the Scotsman struck, with an oath, and the baron’s roar was cut short in a ghastly gurgle as the great blade sheared through shoulder-bone, ribs and spine, casting the mangled corpse limply upon the blood-soaked earth.

“Well struck, warrior!” At the sound of the guttural voice the slayer wheeled like a great wolf, wrenching free the sword. For a tense moment the two eyed each other, the swordsman standing above his victim, a brooding somber figure terrible with potentialities of blood and slaughter, the Tatar sitting his high-peaked saddle like a carven image.

“I am no Turk,” said Ak Boga. “You have no quarrel with me. See, my scimitar is in its sheath. I have need of a man like you–strong as a bear, swift as a wolf, cruel as a falcon. I can bring you to much you desire.”

“I desire only vengeance on the head of Bayazid,” rumbled the Scotsman.

The dark eyes of the Tatar glittered.

“Then come with me. For my lord is the sworn enemy of the Turk.”

“Who is your lord?” asked the Scotsman suspiciously.