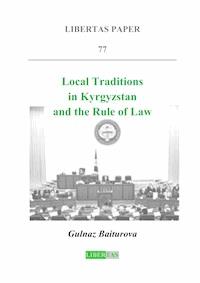 Every European or US consultant for the Kyrgyz government or civil society should read this book - and also those for other Central Asian states, as many social and government fabrics are very close. This book opens the eyes about the Rule of Law, as it was and is still understood by Kyrgyz society, and it opens also ways far from the "teacher's" role of the consultant of the past. The concept of the Ruke of Law is explained in detail, as it was before, during and after communist time, the election of local government past and today, the role of gifts in elections, the role of clans and families during parliamentary elections, and that it will take a certain time until the Central Asian countries can be called a beacon of democracy in the Western sense. However, there is hope, as good consultants will also let the people keep their traditions which are not too ineffective - here the author spreads an optimistic impression about the future of her country. This can be confirmed objectively, some years after March 2006, the third president later, after another revolution and in view of other Central Asian countries. Kyrgyzstan is the only country in Central Asia which tries to have a really pluralistic parliament from which emerges a certain discussion culture, and it disposes today of a relatively free press compared to most other countries of the region. However, there is still a long way to go. As the knowledge about the country in Europe and North America is very restricted, this text may serve to counter this. The author also describes the more and more authoritarian changes in the presidential elections; the manuscript stops in the first time of the Bakiev government, but it is topical until now. A Glossary crowns the book which, short and concise, is a brilliant piece of legal description for Central Asia.

Among her professional experiences are legal clinics, teaching on human rights at American University in Bishkek, an Internship with the International Court of Justice in The Hague/Netherlands, working for UNDP and UNHCR in Kyrgyzstan, and various NGO and public foundation posts, like e.g. judge at a moot court for the American Bar Association, or for the GTZ ("Support to Judiciary Reform"), or for humanitarian aid coordination after an earthquake in Osh. Since 2002 she holds a licence of the Ministry of Justice on the right to conduct Advocate activity, and since February 2011 she is Event Coordinator at Creative Team Events Agency in Bishkek.

This paper has been submitted to the OSCE Academy in Bishkek / Kyrgyzstan at the end of March 2006. This is some years ago now, but it remains unchanged what concerns the basic principles of the Rule of Law, where the author spreads a very optimistic impression about the future of her country. This can be confirmed objectively, some years after March 2006, the third president later, after another revolution and in view of other Central Asian countries. Kyrgyzstan is the only country in Central Asia which tries to have a pluralistic parliament from which emerges already a certain discussion culture, and it disposes of a relatively free press compared to most other countries of the region. However, there is still a long way to go. Asthe knowledge about the country in Europe and North America is very restricted, this text may serve to counter this.

It remains also unchanged what the author writes about the legal traditions of her country. Having worked not only in the capital but in the regions too, she follows an approach of seeing also the rural areas and their legal customs. This paper should be compulsory for every legal expert e.g. of the USA or of the EU who comes to Kyrgyzstan - and it may be used in parallel also to other regions of Central Asia.

1.3      Interaction between the Rule of Law and Traditional Normative Orders

APPENDIX B: Examples of Interview Guides

I would like to thank several people for contributing to the present research:

My sweet daughter Dariya. She w

as born just before I commenced the work on this

research. I am very grateful to her for being tolerant with me, sharing my attention with theoretical concepts and field study

My dearest mom, Baktygul, and my husband, Nurlan for support and va

, who assisted me with editing and improvement of the research

ents who volunteered to assist

me in gathering field information

After gaining independence in 1991, the people of Kyrgyzstan began to recognize the Western idea of rule of law. However, in developing countries such as Kyrgyzstan, where rule of law is not well developed, informal rules stemming from traditional and religious values and institutions continue to be the main alternative to the official legislation.

The question arises whether Kyrgyz traditions predetermine the nature and pace of Kyrgyzstan’s current political and legal transformations. This question relates to a larger question of whether it is ever possible to build rule of law in traditional societies such as Kyrgyzstan, and what role local traditions play in the efforts to strengthen rule of law.

The research results primarily have demonstrated that rule of law (which can be called the roof of a strong democratic state) has only been partially built in Kyrgyzstan because its columns (rule of law fundamentals) and cement (legal mechanisms) are still very weak and fragmented. Most importantly the columns and legal mechanisms are still only loosely connected to society’s foundation of traditions. Even though people recognize and support the introduction of the Western rule of law model, the lack of mechanisms to synchronize them with Kyrgyz culture and traditions has impeded the effective implementation of this model.

Secondly, the study has revealed the undeniable impact of local traditions on the nature of contemporary political developments, including attempts to build a system of checks and balances and to conduct fair elections. However, it is not to be said that traditions predetermine feasibility to build rule of law in a certain society. On the contrary, local traditions often fall victim as an easy excuse for justifying the failures in building a strong democracy.

Moreover, it has been found that both traditions and official laws are often intentionally misused by politicians in order to advance certain political or corrupt interests, and this has been the biggest impediment to strengthening rule of lawin Kyrgyzstan. The practice of misusing traditional and official institutions is often veiled by linking such practices to the traditional origin of the nation.

The research demonstrates that traditional institutions and values should not be blamed for undermining rule of law. Instead we should strengthen the newly introduced rule of law institutions that are considered to be a better alternative. When the basic rule of lawideals are understood and accepted by the lowest strata of society, and are found to be consistent with the Kyrgyzstani people's own ideas of justice, then the possibility for successfully implementing government reforms is greatest. However, such acceptance has to come from the people and can hardly be imposed. Kyrgyzstanipeople should first accept the idea of rule of law and develop corresponding values.

Kyrgyzstan is one of the newly independent former Soviet Union republics situated in Central Asia. Since obtaining independence, the KyrgyzRepublic directed itself on the way of building a strong democratic state governed by law. The legal system of the KyrgyzRepublic has undergone radical transformations since early 1990s.The State has begun adopting new principles such as ideological and political pluralism, social oriented market economy, the extensionof individuals’ rights and freedoms and securing their guarantees. At first Kyrgyzstan had a reputation of being an island of democracy, a progressive state well on its way towards rule of law. Although not possessingimportant mineral resources this landlocked country stood out against a background of its neighbours, primarily for its openness to democratic and market economy reforms and progressive legislation. It was among the first CIS countries that introduced its own currency, as well as private land ownership, and it was the first former Soviet Union country accepted as a member of the WTO.

However, from the mid-nineties the country’s image began to fade. Unfair elections, the biased nature of referendums and attacks on opposition leaders and mass media were part of the attempts by President Askar Akaev and his frequently changing governments to gain more power and achieve their own political goals without public discussions. The oppression of criticism, the lack of independent judges, wide-spread corruption and other negative trends together with economic problems such as substantial disproportion between the rich and the poor led to increasing distrust and grievances among the population. Public discontentculminatedin the popular uprising and coup d'etat or revolt (opinions differ what exactly it was) on March 24, 2005.

Evidently the crisis occurred because laws and development programs were not effectively implemented. Many democratic ideas remained on paper; others were used in ways that did not serve their original intent. Informal rules started to play a more decisive role than the official legislation.1Thus on the one hand, Kyrgyzstan stood on the frontlines as regards progressive reforms. On the other hand, national and international human rights monitoring bodies continuously reported that the country was remote from the rule of law. While it remains to be seen what the developments will be after the March 2005 events that unambiguously raised public consciousness of the entire population, this was the time to study how local traditions influence endeavours to establish the rule of law. A clear understanding of the nature of the traditions (the norms, the values and the mentality) of the Kyrgyzstanisociety and their impact on legal and political processes will provide better insight into ways in which effective policies can be developed and previous mistakes can be avoided.

In the first chapter of the first section I describe the concept of rule of law as it ishighlighted in Western European thinking and now is exported as the ideal model for state building. I indicate the main components of the rule of law concept and the role it is supposed to play. In the following chapter I address the role of traditional (informal) normative ordersthat exist side-by-side with the state legal system and equally govern people’s behavior. In order to better comprehend the contemporary social processes in Kyrgyzstan, the second section of the research will provide a historical overview of the nature of Kyrgyz traditions and traditions that arose under the Soviet times. Subsequently, in the third section of the research two studies will be explored concerning the implications of tradition on such rule of law fundamentals as the separation of powers and the fair election process. Finally, in the section on interpretations and conclusions I summarise the role of traditions in the nature ofcontemporary legal and political developments in Kyrgyzstan and subsequently discuss and recommend the potential for positive changes.

Due to the vastness of the subject the current work does not intend to be a comprehensive, all-inclusive investigation. However, it constitutes an attempt to analyse the relationship between the fundamental ideas of the rule of law and norms and values in the traditions of the Kyrgyz culture.

The present research in this paper is empirically oriented. On the one hand, I have approached the theme from a historical perspective by investigating traditions inherited from former legal systems. On the other hand, I have analysed the present day informal rules in order to provide a view of the nature of rules actually working in