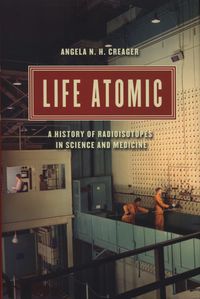 fter World War II, the US Atomic Energy Commission (AEC) began mass-producing radioisotopes, sending out nearly 64,000 shipments of radioactive materials to scientists and physicians by 1955. Even as the atomic bomb became the focus of Cold War anxiety, radioisotopes represented the government’s efforts to harness the power of the atom for peace—advancing medicine, domestic energy, and foreign relations.

In Life Atomic, Angela N. H. Creager tells the story of how these radioisotopes, which were simultaneously scientific tools and political icons, transformed biomedicine and ecology. Government-produced radioisotopes provided physicians with new tools for diagnosis and therapy, specifically cancer therapy, and enabled biologists to trace molecular transformations. Yet the government’s attempt to present radioisotopes as marvelous dividends of the atomic age was undercut in the 1950s by the fallout debates, as scientists and citizens recognized the hazards of low-level radiation. Creager reveals that growing consciousness of the danger of radioactivity did not reduce the demand for radioisotopes at hospitals and laboratories, but it did change their popular representation from a therapeutic agent to an environmental poison. She then demonstrates how, by the late twentieth century, public fear of radioactivity overshadowed any appreciation of the positive consequences of the AEC’s provision of radioisotopes for research and medicine.