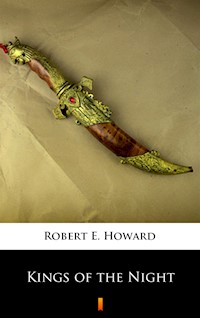 Kings of the Night ebook

The dagger flashed downward. A sharp cry broke in a gasp. The form on the rough altar twitched convulsively and lay still. The jagged flint edge sawed at the crimsoned breast, and thin bony fingers, ghastly dyed, tore out the still- twitching heart. Under matted white brows, sharp eyes gleamed with a ferocious intensity.

The Caesar lolled on his ivory throne– His iron legions came To break a king in a land unknown, And a race without a name. –The Song of Bran

The dagger flashed downward. A sharp cry broke in a gasp. The form on the rough altar twitched convulsively an lay still. The jagged flint edge sawed at the crimsoned breast, and thin bony fingers, ghastly dyed, tore out the still- twitching heart. Under matted white brows, sharp eyes gleamed with a ferocious intensity.

Besides the slayer, four men stood about the crude pile of stones that formed the altar of the God of Shadows. One was of medium height, lithely built, scantily clad, whose black hair was confined by a narrow iron band in the center of which gleamed a single red jewel. Of the others, two were dark like the first. But where he was lithe, they were stocky and misshapen, with knotted limbs, and tangled hair falling over sloping brows. His face denoted intelligence and implacable will; theirs merely a beast-like ferocity. The fourth man had little in common with the rest. Nearly a head taller, though his hair was black as theirs, his skin was comparatively light and he was gray- eyed. He eyed the proceedings with little favor.

And, in truth, Cormac of Connacht was little at ease. The Druids of his own isle of Erin had strange dark rites of worship, but nothing like this. Dark trees shut in this grim scene, lit by a single torch. Through the branches moaned an eerie night-wind. Cormac was alone among men of a strange race and he had just seen the heart of a man ripped from his still pulsing body. Now the ancient priest, who looked scarcely human, was glaring at the throbbing thing. Cormac shuddered, glancing at him who wore the jewel. Did Bran Mak Morn, king of the Picts, believe that this white-bearded old butcher could foretell events by scanning a bleeding human heart? The dark eyes of the king were inscrutable. There were strange depths to the man that Cormac could not fathom, nor any other man.

“The portents are good!” exclaimed the priest wildly, speaking more to the two chieftains than to Bran. “Here from the pulsing heart of a captive Roman I read–defeat for the arms of Rome! Triumph for the sons of the heather!”

The two savages murmured beneath their breath, their fierce eyes smoldering.

“Go and prepare your clans for battle,” said the king, and they lumbered away with the ape-like gait assumed by such stunted giants. Paying no more heed to the priest who was examining the ghastly ruin on the altar, Bran beckoned to Cormac. The Gael followed him with alacrity. Once out of that grim grove, under the starlight, he breathed more freely. They stood on an eminence, looking out over long swelling undulations of gently waving heather. Near at hand a few fires twinkled, their fewness giving scant evidence of the hordes of tribesmen who lay close by. Beyond these were more fires and beyond these still more, which last marked the camp of Cormac’s own men, hard-riding, hard-fighting Gaels, who were of that band which was just beginning to get a foothold on the western coast of Caledonia–the nucleus of what was later to become the kingdom of Dalriadia. To the left of these, other fires gleamed.

And far away to the south were more fires–mere pinpoints of light. But even at that distance the Pictish king and his Celtic ally could see that these fires were laid out in regular order.

“The fires of the legions,” muttered Bran. “The fires that have lit a path around the world. The men who light those fires have trampled the races under their iron heels. And now–we of the heather have our backs at the wall. What will fall on the morrow?”

“Victory for us, says the priest,” answered Cormac.

Bran made an impatient gesture. “Moonlight on the ocean. Wind in the fir tops. Do you think that I put faith in such mummery? Or that I enjoyed the butchery of a captive legionary? I must hearten my people; it was for Gron and Bocah that I let old Gonar read the portents. The warriors will fight better.”

Bran laughed. “Gonar is too old to believe–anything. He was high priest of the Shadows a score of years before I was born. He claims direct descent from that Gonar who was a wizard in the days of Brule the Spear-slayer who was the first of my line. No man knows how old he is– sometimes I think he is the original Gonar himself!”

“At least,” said a mocking voice, and Cormac started as a dim shape appeared at his side, “at least I have learned that in order to keep the faith and trust of the people, a wise man must appear to be a fool. I know secrets that would blast even your brain, Bran, should I speak them. But in order that the people may believe in me, I must descend to such things as they think proper magic–and prance and yell and rattle snakeskins, and dabble about in human blood and chicken livers.”

Cormac looked at the ancient with new interest. The semi-madness of his appearance had vanished. He was no longer the charlatan, the spell-mumbling shaman. The starlight lent him a dignity which seemed to increase his very height, so that he stood like a white-bearded patriarch.

“Bran, your doubt lies there.” The lean arm pointed to the fourth ring of fires.

“Aye,” the king nodded gloomily. “Cormac–you know as well as I. Tomorrow’s battle hinges upon that circle of fires. With the chariots of the Britons and your own Western horsemen, our success would be certain, but –surely the devil himself is in the heart of every Northman! You know how I trapped that band–how they swore to fight for me against Rome! And now that their chief, Rognar, is dead, they swear that they will be led only by a king of their own race! Else they will break their vow and go over to the Romans. Without them we are doomed, for we can not change our former plan.”

“Take heart, Bran,” said Gonar. “Touch the jewel in your iron crown. Mayhap it will bring you aid.”

Bran laughed bitterly. “Now you talk as the people think. I am no fool to twist with empty words. What of the gem? It is a strange one, truth, and has brought me luck ere now. But I need now no jewels, but the allegiance of three hundred fickle Northmen who are the only warriors among us who may stand the charge of the legions on foot.”

“But the jewel, Bran, the jewel!” persisted Gonar.