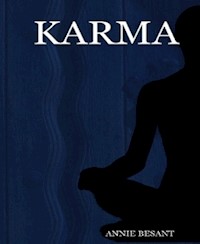 EVERY thought of man upon being evolved passes into the inner world, and becomes an active entity by associating itself, coalescing we might term it, with an elemental—that is to say, with one of the semi-intelligent forces of the kingdoms. It survives as an active intelligence—a creature of the mind's begetting—for a longer or shorter period proportionate with the original intensity of the cerebral action which generated it. Thus a good thought is perpetuated as an active, benefi­cent power, an evil one as a maleficent demon. And so man is continually peopling his current in space with a world of his own, crowded with the offspring of his fancies, desires, impulses and passions; a current which reacts upon any sensitive or nervous organization which comes in contact with it, in proportion to its dynamic intensity. The Buddhist calls it his "Skandha"; the Hindu gives it the name of " Karma". The Adept evolves these shapes consciously; other men throw them off unconsciously. 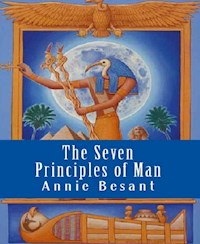 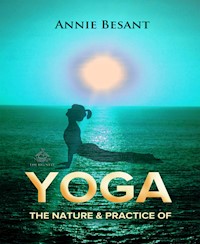 The Nature and Practice of Yoga
Annie Besant 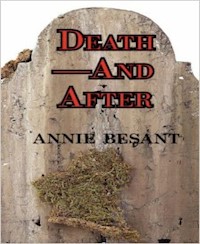 Death and After?
Annie Besant 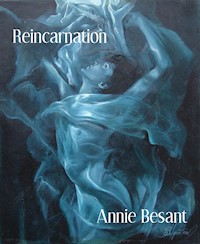 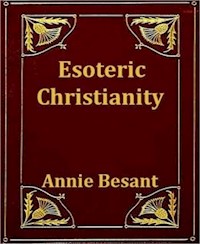 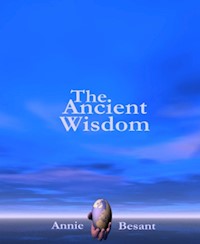 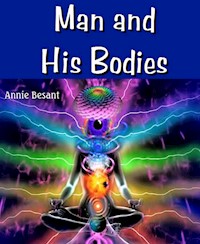 Man and His Bodies
Annie Besant 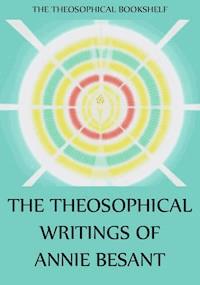 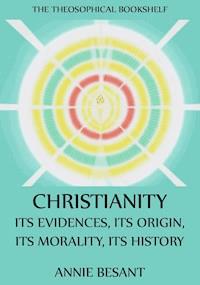 Christianity: Its Evidences, Its Origin, Its Morality, Its History
Annie Besant 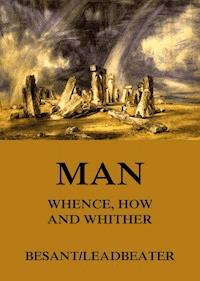 Man: Whence, How and Whither
Annie Besant

EVERY thought of man upon being evolved passes into the inner world, and becomes an active entity by associating itself, coalescing we might term it, with an elemental—that is to say, with one of the semi-intelligent forces of the kingdoms. It survives as an active intelligence—a creature of the mind's begetting—for a longer or shorter period proportionate with the original intensity of the cerebral action which generated it. Thus a good thought is perpetuated as an active, benefi­cent power, an evil one as a maleficent demon. And so man is continually peopling his current in space with a world of his own, crowded with the offspring of his fancies, desires, impulses and passions; a current which reacts upon any sensitive or nervous organization which comes in contact with it, in proportion to its dynamic intensity. The Buddhist calls it his "Skandha"; the Hindu gives it the name of " Karma". The Adept evolves these shapes consciously; other men throw them off unconsciously.

No more graphic picture of the essential nature of karma has ever been given than in these words, taken from one of the early letters of Master K. H. If these are clearly understood, with all their implications, the perplexities which surround the subject will for the most part disappear, and the main principle underly­ing karmic action will be grasped. They will therefore be taken as indicating the best line of study, and we shall begin by considering the creative powers of man. All we need as preface is a clear conception of the invariability of law, and of the great planes in Nature.

The Invariability of Law

That we live in a realm of law, that we are sur­rounded by laws that we cannot break, this is a truism. Yet when the fact is recognized in a real -and vital way, and when it is seen to be a fact in the mental and moral world as much as in the physical, a certain sense of helplessness is apt to overpower us, as though we felt ourselves in the grip of some mighty power, that, seizing us, whirls us away whither it will. The very reverse of this is in reality the case, for the mighty power, when it is understood, will obedi­ently carry us whither we will: all forces in Nature can be used in proportion as they are understood—

" Nature is conquered by obedience "—and her resistless energies are at our bidding as soon as we, by knowledge, work with them and not against them. We can choose out of her boundless stores the forces that serve our purpose in momentum, in direction, and so on, and their very invariability becomes the guarantee of our success.

On the invariability of law depends the security of scientific experiment, and all power of planning a result and of predicting the future. On this the chemist rests, sure that Nature will ever respond in the same way, if he be precise in putting his questions. A variation in his results is taken by him as implying a change in his procedure, not a change in Nature. And so with all human action; the more it is based on knowledge, the more secure is it in its forecastings, for all " accident" is the result of ignorance, and is due to the working of laws whose presence was unknown or overlooked. In the mental and moral worlds, as much as in the physical, results can be foreseen, planned for, calculated on. Nature never betrays us; we are betrayed by our own blindness. In all worlds increasing knowledge means increasing power, and omniscience and omnipotence are one.

That law should be as invariable in the mental and moral worlds as in the physical is to be expected, since the universe is the emanation of the ONE, and what we call Law is but the expression of the Divine Nature. As there is one Life emanating all, so there is one Law sustaining all; the worlds rest on this rock of the Divine Nature as on a secure, immutable foundation.

The Planes of Nature

To study the workings of karma on the line sug­gested by the Master, we must gain a clear conception of the three lower planes, or regions, of the universe, and of the principles 1 related to them. The names given to them indicate the state of the consciousness working on them. In this a diagram may help us, showing the planes with the principles related to them, and the vehicles in which a conscious entity may visit them. In practical occultism the student learns to visit these planes, and by his own investigations to transform theory into knowledge. The lowest vehicle, the gross body, serves the consciousness for its work on the physi­cal plane, and in this the consciousness is limited with­in the capacities of the brain. The term subtle body covers a variety of astral bodies, respectively suitable to the varying conditions of the very complicated region indicated by the name psychic plane. On the devachanic plane there are two well-defined levels, the form level and the formless level; on the lower, consci­ousness uses an artificial body, the mayavi rupa, but the term Mind Body seems suitable as indicating that the matter of which it is composed belongs to the plane of manas. On the formless level the causal body must be used. Of the buddhic plane it is needless to speak. Now the matter on these planes is not the same, and speaking generally, the matter of each plane is denser than that of the one above it. This is accord­ing to the analogy of Nature, for evolution in its downward course is from rare to dense, from subtle to gross. Further, vast hierarchies of beings inhabit these planes, ranging from the lofty intelligences of the spiritual region to the lowest sub-conscious elementals of the physical world. On every plane spirit and matter are conjoined in every particle—-every particle having matter as its body, spirit as its life—and all independent aggregations of particles, all separated forms of every kind, of every type, are ensouled by these living beings, varying in their grades according to the grade of the form. No form exists which is not thus ensouled, but the informing entity may be the loftiest intelligence, the lowest elemental, or any of the countless hosts that range between. The entities with which we shall presently be concerned are chiefly those of the psychic plane, for these give to man his body of desire (kama rupa)—his body of sensation, as it is often called—-are indeed built into its astral matrix and vivify his astral senses. They are, to use the technical name, the form elementals (rupa devatas) of the animal world, and are the agents of the changes which transmute vibrations into sensations. The most salient characteristic of the kamic ele­mentals is sensation, the power of not only answering to vibrations but of feeling them; and the psychic plane is crowded with these entities, of varying degrees of consciousness, who receive impacts of every kind and combine them into sensations. Any being who possesses, then, a body into which these elementals are built, is capable of feeling, and man feels through such a body. A man is not conscious in the particles of his body or even in its cells; they have a conscious­ness of their own, and by this carry on the various processes of his vegetative life; but the man whose body they form does not share their consciousness, does not consciously help or hinder them as they select, assimilate, secrete, build up, and could not at any moment so put his consciousness into rapport with the consciousness of a cell in his heart as to say exactly what it was doing. His consciousness functions nor­mally on the psychic plane; and even in the higher psychic regions, where mind is working, it is mind intermingled with kama, pure mind not functioning on this astral plane.

The astral plane is thronged with elementals similar to those which enter into the desire body of man, and which also form the simpler desire body of the lower animal. By this department of his nature man comes into immediate relations with these elementals, and by them he forms links with all the objects around him that are either attractive or repulsive to him. By his will, by his emotions, by his desires, he influences these countless beings, which sensitively respond to all the thrills of feeling that he sends out in every direction. His own desire body acts as the apparatus, and just as it combines the vibrations that come from without into feelings, so does it dissociate the feelings that arise within into vibrations.

The Generation of Thought-Forms

We are now in a position to more clearly understand the Master's words. The mind, working in its own region, in the subtle matter of the higher psychic plane, generates images, thought-forms. Imagination has very accurately been called the creative faculty of the mind, and it is so in a more literal sense than many may suppose who use the phrase. This image-making capacity is the characteristic power of the mind, and a word is only a clumsy attempt to partially represent a mental picture. An idea, a mental image, is a complicated thing, and needs perhaps a whole sentence to describe it accurately, so a salient incident in it is seized, and the word naming this incident imperfectly represents the whole; we say "triangle", and the word calls up in the hearer's mind a picture, which would need a long description if fully conveyed in words; we do our best thinking in symbols, and then laboriously and imperfectly summarize our symbols into words. In regions where mind speaks to mind there is perfect expression, far beyond anything words may convey; even in thought transference of a limited kind it is not words that are sent, but ideas. A speaker puts into words such part of his mental pictures as he can, and these words call up in the hearer's mind pictures corresponding to those in the mind of the speaker; the mind deals with the pictures, the images, not with the words, and half the controversies and misunderstandings that arise come about because people attach different images to the same words, or use different words to represent the same images.