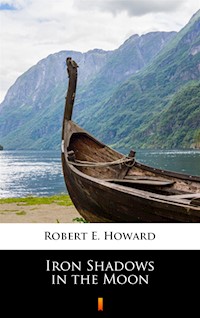 Iron Shadows in the Moon ebook

Shadows in the Moonlight is one of the original short stories starring the fictional sword and sorcery hero Conan the Cimmerian, written author Robert E. Howard and first published in Weird Tales magazine in April 1934. Howard originally named his story „Iron Shadows in the Moon”. It is set in the pseudo-historical Hyborian Age and concerns Conan escaping to a remote island in the Vilayet Sea where he encounters the Red Brotherhood, a skulking creature, and mysterious iron statues.

A SWIFT CRASHING of horses through the tall reeds; a heavy fall, a despairing cry. From the dying steed there staggered up its rider, a slender girl in sandals and girdled tunic. Her dark hair fell over her white shoulders, her eyes were those of a trapped animal. She did not look at the jungle of reeds that hemmed in the little clearing, nor at the blue waters that lapped the low shore behind her. Her wide-eyed gaze was fixed in agonized intensity on the horseman who pushed through the reedy screen and dismounted before her.

He was a tall man, slender, but hard as steel. From head to heel he was clad in light silvered mesh-mail that fitted his supple form like a glove. From under the dome-shaped, gold-chased helmet his brown eyes regarded her mockingly.

“Stand back!” her voice shrilled with terror. “Touch me not, Shah Amurath, or I will throw myself into the water and drown!”

He laughed, and his laughter was like the purr of a sword sliding from a silken sheath.

“No, you will not drown, Olivia, daughter of confusion, for the marge is too shallow, and I can catch you before you can reach the deeps. You gave me a merry chase, by the gods, and all my men are far behind us. But there is no horse west of Vilayet that can distance Item for long.” He nodded at the tall, slender-legged desert stallion behind him.

“Let me go!” begged the girl, tears of despair staining her face. “Have I not suffered enough? Is there any humiliation, pain or degradation you have not heaped on me? How long must my torment last?”

“As long as I find pleasure in your whimperings, your pleas, tears and writhings,” he answered with a smile that would have seemed gentle to a stranger. “You are strangely virile, Olivia. I wonder if I shall ever weary of you, as I have always wearied of women before. You are ever fresh and unsullied, in spite of me. Each new day with you brings a new delight.

“But come–let us return to Akif, where the people are still feting the conqueror of the miserable kozaki; while he, the conqueror, is engaged in recapturing a wretched fugitive, a foolish, lovely, idiotic runaway!”

“No!” She recoiled, turning toward the waters lapping bluely among the reeds.

“Yes!” His flash of open anger was like a spark struck from flint. With a quickness her tender limbs could not approximate, he caught her wrist, twisting it in pure wanton cruelty until she screamed and sank to her knees.

“Slut! I should drag you back to Akif at my horse’s tail, but I will be merciful and carry you on my saddle-bow, for which favor you shall humbly thank me, while–”

He released her with a startled oath and sprang back, his saber flashing out, as a terrible apparition burst from the reedy jungle sounding an inarticulate cry of hate.

Olivia, staring up from the ground, saw what she took to be either a savage or a madman advancing on Shah Amurath in an attitude of deadly menace. He was powerfully built, naked but for a girdled loin-cloth, which was stained with blood and crusted with dried mire. His black mane was matted with mud and clotted blood; there were streaks of dried blood on his chest and limbs, dried blood on the long straight sword he gripped in his right hand. From under the tangle of his locks, bloodshot eyes glared like coals of blue fire.

“You Hyrkanian dog!” mouthed this apparition in a barbarous accent. “The devils of vengeance have brought you here!”

“Kozak!” ejaculated Shah Amurath, recoiling. “I did not know a dog of you escaped! I thought you all lay stiff on the steppe, by Ilbars River.”

“All but me, damn you!” cried the other. “Oh, I’ve dreamed of such a meeting as this, while I crawled on my belly through the brambles, or lay under rocks while the ants gnawed my flesh, or crouched in the mire up to my mouth–I dreamed, but never hoped it would come to pass. Oh, gods of Hell, how I have yearned for this!”

The stranger’s bloodthirsty joy was terrible to behold. His jaws champed spasmodically, froth appeared on his blackened lips.

“Ha!” It was like the bark of a timber wolf. “Shah Amurath, the great Lord of Akif! Oh, damn you, how I love the sight of you–you, who fed my comrades to the vultures, who tore them between wild horses, blinded and maimed and mutilated them all, you dog, you filthy dog!” His voice rose to a maddened scream, and he charged.

In spite of the terror of his wild appearance, Olivia looked to see him fall at the first crossing of the blades. Madman or savage, what could he do, naked, against the mailed chief of Akif?

There was an instant when the blades flamed and licked, seeming barely to touch each other and leap apart; then the broadsword flashed past the saber and descended terrifically on Shah Amurath’s shoulder. Olivia cried out at the fury of that stroke. Above the crunch of the rending mail, she distinctly heard the snap of the shoulder-bone. The Hyrkanian reeled back, suddenly ashen, blood spurting over the links of his hauberk; his saber slipped from his nerveless fingers.

“Quarter?” There was a quiver of frenzy in the stranger’s voice. “Quarter such as you gave us, you swine!”

Olivia closed her eyes. This was no longer battle, but butchery, frantic, bloody, impelled by an hysteria of fury and hate, in which culminated the sufferings of battle, massacre, torture, and fear-ridden, thirst-maddened, hunger-haunted flight. Though Olivia knew that Shah Amurath deserved no mercy or pity from any living creature, yet she closed her eyes and pressed her hands over her ears, to shut out the sight of that dripping sword that rose and fell with the sound of a butcher’s cleaver, and the gurgling cries that dwindled away and ceased.

She opened her eyes, to see the stranger turning away from a gory travesty that only vaguely resembled a human being. The man’s breast heaved with exhaustion or passion; his brow was beaded with sweat; his right hand was splashed with blood.

He did not speak to her, or even glance toward her. She saw him stride through the reeds that grew at the water’s edge, stoop, and tug at something. A boat wallowed out of its hiding place among the stalks. Then she divined his intention, and was galvanized into action.

“Oh, wait!” she wailed, staggering up and running toward him. “Do not leave me! Take me with you!”

He wheeled and stared at her. There was a difference in his bearing. His bloodshot eyes were sane. It was as if the blood he had just shed had quenched the fire of his frenzy.

“Who are you?” he demanded.