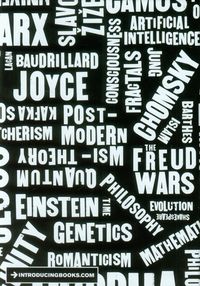 Using comic-book style illustration combined with accessible but authoritative text, the Introducing Graphic Guide series is a uniquely brilliant way to get your head around some of humankind’s most thrilling ideas.

One of the biggest-selling titles in the Introducing series, J.P. McEvoy and Oscar Zarate’s utterly brilliant Introducing Quantum Theory explores one of the most challenging, thrilling and mysterious areas of science. Taking the reader on a step-by-step tour, they tackle the puzzle of the wave-particle duality, Schrödinger’s ‘dead and alive cat’, the EPR paradox and much more, explaining this notoriously difficult theory with patience, wit and clarity.

It is now more than a century since Einstein’s theories of Special and General Relativity began to revolutionise our view of the universe. Beginning near the speed of light and proceeding to explorations of space-time and curved spaces, Introducing Relativity plots a visually accessible course through the thought experiments that have given shape to contemporary physics. This is a superlative, fascinating graphic account of Einstein’s strange world and how his legacy has been built upon since.

If a butterfly flaps its wings in Brazil, does it cause a tornado in Texas? Described as ‘a beautifully succinct primer … most recommended’ by Time Out, Ziauddin Sardar and Iwona Abrams’ Introducing Chaos attempts to answer bafflingly difficult questions like this. Explaining how chaos makes its presence felt in events from the fluctuation of the animal population to the ups and downs of the stock market, the book offers a uniquely approachable introduction to an astonishing and controversial theory.