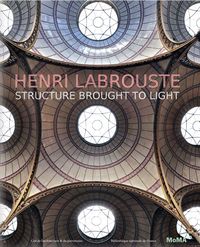 Henri Labrouste is one of the few nineteenth-century architects who have been lionized consistently as precursors of modern architecture throughout the twentieth century and into our own time. The two magisterial glass-and-iron reading rooms Labrouste built in Paris from the 1840s through the 1860s gave form to the idea of the modern library as a great collective civic space, and his influence was immediate and long lasting on both the development of the modern library and the exploration of new paradigms of space, materials, and luminosity in places of public assembly.

Published in conjunction with the first exhibition devoted to Labrouste in the United States—and the first anywhere in the world in nearly forty years—this book is the result of a four-year research project into the entirety of Labrouste’s production. It presents nearly 225 works in a variety of mediums, including drawings, watercolors, vintage and modern photographs, film stills, and architectural models. Essays by a range of international architecture scholars explore Labrouste’s work and legacy, offering fresh historical perspectives on the architect and his structural innovations. 232 pages; 225 illustrations.