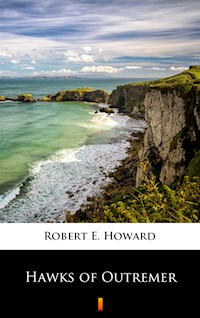 Hawks of Outremer is a tight tale. The main character is Cormac FitzGeoffrey, a bastard Norman-Gael who has thrown his lot in with the Crusaders. Once a loose peace was established in Outremer, Cormac returned to Ireland but after a short stint fighting, peace broke out there, too. Cormac returns to the Holy Land (Outremer) seeking to attach himself to a liege, only to learn that his liege of choice has been assassinated. Plots are afoot between Muslims and Christian lords who want nothing to do with Saladin nor European kings. Rather than jeopardize the peace with an armed force, FitzGeoffrey vows vengeance and embarks solo to deal death to those who deserve it.

I. A MAN RETURNS

II. THE CAST OF AN AX

III. THE ROAD TO EL GHOR

IV. THE FAITH OF CORMAC

I. A MAN RETURNS

“HALT!” The bearded man-at-arms swung his pike about, growling like a surly mastiff. It paid to be wary on the road to Antioch. The stars blinked redly through the thick night and their light was not sufficient for the fellow to make out what sort of man it was who loomed so gigantically before him.

An iron-clad hand shot out suddenly and closed on the soldier’s mailed shoulder in a grasp that numbed his whole arm. From beneath the helmet the guardsman saw the blaze of ferocious blue eyes that seemed lambent, even in the dark.

“Saints preserve us!” gasped the frightened man-at-arms, “Cormac FitzGeoffrey! Avaunt! Back to Hell with ye, like a good knight! I swear to you, sir–”

“Swear me no oaths,” growled the knight. “What is this talk?”

“Are you not an incorporeal spirit?” mouthed the soldier. “Were you not slain by the Moorish corsairs on your homeward voyage?”

“By the accursed gods!” snarled FitzGeoffrey. “Does this hand feel like smoke?”

He sank his mailed fingers into the soldier’s arm and grinned bleakly at the resultant howl.

“Enough of such mummery; tell me who is within that tavern.”

“Only my master, Sir Rupert de Vaile, of Rouen.”

“Good enough,” grunted the other. “He is one of the few men I count friends, in the East or elsewhere.”

The big warrior strode to the tavern door and entered, treading lightly as a cat despite his heavy armor. The man-at-arms rubbed his arm and stared after him curiously, noting, in the dim light, that FitzGeoffrey bore a shield with the horrific emblem of his family–a white grinning skull. The guardsman knew him of old–a turbulent character, a savage fighter and the only man among the Crusaders who had been esteemed stronger than Richard the Lion-hearted. But FitzGeoffrey had taken ship for his native isle even before Richard had departed from the Holy Land. The Third Crusade had ended in failure and disgrace; most of the Frankish knights had followed their kings homeward. What was this grim Irish killer doing on the road to Antioch?

Sir Rupert de Vaile, once of Rouen, now a lord of the fast-fading Outremer, turned as the great form bulked in the doorway. Cormac FitzGeoffrey was a fraction of an inch above six feet, but with his mighty shoulders and two hundred pounds of iron muscle, he seemed shorter. The Norman stared in surprized recognition, and sprang to his feet. His fine face shone with sincere pleasure.

“Cormac, by the saints! Why, man, we heard that you were dead!”

Cormac returned the hearty grip, while his thin lips curved slightly in what would have been, in another man, a broad grin of greeting. Sir Rupert was a tall man, and well knit, but he seemed almost slight beside the huge Irish warrior who combined bulk with a sort of dynamic aggressiveness that was apparent in his every movement.

FitzGeoffrey was clean-shaven and the various scars that showed on his dark, grim face lent his already formidable features a truly sinister aspect. When he took off his plain visorless helmet and thrust back his mail coif, his square-cut, black hair that topped his low broad forehead contrasted strongly with his cold blue eyes. A true son of the most indomitable and savage race that ever trod the bloodstained fields of battle, Cormac FitzGeoffrey looked to be what he was–a ruthless fighter, born to the game of war, to whom the ways of violence and bloodshed were as natural as the ways of peace are to the average man.

Son of a woman of the O’Briens and a renegade Norman knight, Geoffrey the Bastard, in whose veins, it is said, coursed the blood of William the Conqueror, Cormac had seldom known an hour of peace or ease in all his thirty years of violent life. He was born in a feud-torn and blood-drenched land, and raised in a heritage of hate and savagery. The ancient culture of Erin had long crumbled before the repeated onslaughts of Norsemen and Danes. Harried on all sides by cruel foes, the rising civilization of the Celts had faded before the fierce necessity of incessant conflict, and the merciless struggle for survival had made the Gaels as savage as the heathens who assailed them.

Now, in Cormac’s time, war upon red war swept the crimson isle, where clan fought clan, and the Norman adventurers tore at one another’s throats, or resisted the attacks of the Irish, playing tribe against tribe, while from Norway and the Orkneys the still half-pagan Vikings ravaged all impartially.

A vague realization of all this flashed through Sir Rupert’s mind as he stood staring at his friend.

“We heard you were slain in a sea-fight off Sicily,” he repeated.

Cormac shrugged his shoulders. “Many died then, it is true, and I was struck senseless by a stone from a ballista. Doubtless that is how the rumor started. But you see me, as much alive as ever.”

“Sit down, old friend.” Sir Rupert thrust forward one of the rude benches which formed part of the tavern’s furniture. “What is forward in the West?”

Cormac took the wine goblet proffered him by a dark-skinned servitor, and drank deeply.

“Little of note,” said he. “In France the king counts his pence and squabbles with his nobles. Richard–if he lives–languishes somewhere in Germany, ‘tis thought. In England Shane–that is to say, John–oppresses the people and betrays the barons. And in Ireland –Hell!” He laughed shortly and without mirth. “What shall I say of Ireland but the same old tale? Gael and foreigner cut each other’s throat and plot together against the king. John De Coursey, since Hugh de Lacy supplanted him as governor, has raged like a madman, burning and pillaging, while Donal O’Brien lurks in the west to destroy what remains. Yet, by Satan, I think this land is but little better.”

“Yet there is peace of a sort now,” murmured Sir Rupert.

“Aye–peace while the jackal Saladin gathers his powers,” grunted Cormac. “Think you he will rest idle while Acre, Antioch and Tripoli remain in Christian hands? He but waits an excuse to seize the remnants of Outremer.”