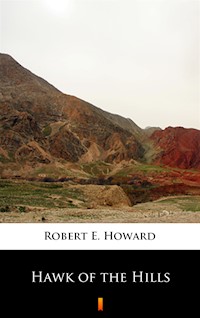 Hawk of the Hills ebook

This early work by Robert E. Howard was originally published. ’Hawk of the Hills’ is a story in the El Borak series where El Borak leads a tribe to war in Afganistan. I recommend this book

TO a man standing in the gorge below, the man clinging to the sloping cliff would have been invisible, hidden from sight by the jutting ledges that looked like irregular stone steps from a distance. From a distance, also, the rugged wall looked easy to climb; but there were heart-breaking spaces between those ledges–stretches of treacherous shale, and steep pitches where clawing fingers and groping toes scarcely found a grip.

One misstep, one handhold lost and the climber would have pitched backward in a headlong, rolling fall three hundred feet to the rocky canyon bed. But the man on the cliff was Francis Xavier Gordon, and it was not his destiny to dash out his brains on the floor of a Himalayan gorge.

He was reaching the end of his climb. The rim of the wall was only a few feet above him, but the intervening space was the most dangerous he had yet covered. He paused to shake the sweat from his eyes, drew a deep breath through his nostrils, and once more matched eye and muscle against the brute treachery of the gigantic barrier. Faint yells welled up from below, vibrant with hate and edged with blood lust. He did not look down. His upper lip lifted in a silent snarl, as a panther might snarl at the sound of his hunters’ voices. That was all. His fingers clawed at the stone until blood oozed from under his broken nails. Rivulets of gravel started beneath his boots and streamed down the ledges. He was almost there–but under his toe a jutting stone began to give way. With an explosive expansion of energy that brought a tortured gasp from him, he lunged upward, just as his foothold tore from the soil that had held it. For one sickening instant he felt eternity yawn beneath him– then his upflung fingers hooked over the rim of the crest. For an instant he hung there, suspended, while pebbles and stones went rattling down the face of the cliff in a miniature avalanche. Then with a powerful knotting and contracting of iron biceps, he lifted his weight and an instant later climbed over the rim and stared down.

He could make out nothing in the gorge below, beyond the glimpse of a tangle of thickets. The jutting ledges obstructed the view from above as well as from below. But he knew his pursuers were ranging those thickets down there, the men whose knives were still reeking with the blood of his friends. He heard their voices, edged with the hysteria of murder, dwindling westward. They were following a blind lead and a false trail.

Gordon stood up on the rim of the gigantic wall, the one atom of visible life among monstrous pillars and abutments of stone; they rose on all sides, dwarfing him, brown insensible giants shouldering the sky. But Gordon gave no thought to the somber magnificence of his surroundings, or of his own comparative insignificance.

Scenery, however awesome, is but a background for the human drama in its varying phases. Gordon’s soul was a maelstrom of wrath, and the distant, dwindling shout below him drove crimson waves of murder surging through his brain. He drew from his boot the long knife he had placed there when he began his desperate climb. Half-dried blood stained the sharp steel, and the sight of it gave him a fierce satisfaction. There were dead men back there in the valley into which the gorge ran, and not all of them were Gordon’s Afridi friends. Some were Orakzai, the henchmen of the traitor Afdal Khan–the treacherous dogs who had sat down in seeming amity with Yusef Shah, the Afridi chief, his three headmen and his American ally, and who had turned the friendly conference suddenly into a holocaust of murder.

Gordon’s shirt was in ribbons, revealing a shallow sword cut across the thick muscles of his breast, from which blood oozed slowly. His black hair was plastered with sweat, the scabbards at his hips empty. He might have been a statue on the cliffs, he stood so motionless, except for the steady rise and fall of his arching chest as he breathed deep through expanded nostrils. In his black eyes grew a flame like fire on deep black water. His body grew rigid; muscles swelled in knotted cords on his arms, and the veins of his temples stood out.

Treachery and murder! He was still bewildered, seeking a motive. His actions until this moment had been largely instinctive, reflexes responding to peril and the threat of destruction. The episode had been so unexpected– so totally lacking in apparent reason. One moment a hum of friendly conversation, men sitting cross-legged about a fire while tea boiled and meat roasted; the next instant knives sinking home, guns crashing, men falling in the smoke–Afridi men; his friends, struck down about him, with their rifles laid aside, their knives in their scabbards.

Only his steel-trap coordination had saved him–that instant, primitive reaction to danger that is not dependent upon reason or any logical thought process. Even before his conscious mind grasped what was happening, Gordon was on his feet with both guns blazing. And then there was no time for consecutive thinking, nothing but desperate hand-to-hand fighting, and flight on foot–a long run and a hard climb. But for the thicket-choked mouth of a narrow gorge they would have had him, in spite of everything.

Now, temporarily safe, he could pause and apply reasoning to the problem of why Afdal Khan, chief of the Khoruk Orakzai, plotted thus foully to slay the four chiefs of his neighbors, the Afridis of Kurram, and their feringhi friend. But no motive presented itself. The massacre seemed utterly wanton and reasonless. At the moment Gordon did not greatly care. It was enough to know that his friends were dead, and to know who had killed them.

Another tier of rock rose some yards behind him, broken by a narrow, twisting cleft. Into this he moved. He did not expect to meet an enemy; they would all be down there in the gorge, beating up the thickets for him; but he carried the long knife in his hand, just in case.

It was purely an instinctive gesture, like the unsheathing of a panther’s claws. His dark face was like iron; his black eyes burned redly; as he strode along the narrow defile he was more dangerous than any wounded panther. An urge painful in its intensity beat at his brain like a hammer that would not ease; revenge! revenge! revenge! All the depths of his being responded to the reverberation. The thin veneer of civilization had been swept away by a red tidal wave. Gordon had gone back a million years into the red dawn of man’s beginning; he was as starkly primitive as the colossal stones that rose about him.

Ahead of him the defile twisted about a jutting shoulder to come, as he knew, out upon a winding mountain path. That path would lead him out of the country of his enemies, and he had no reason to expect to meet any of them upon it. So it was a shocking surprise to him when he rounded the granite shoulder and came face to face with a tall man who lolled against a rock, with a pistol in his hand.

That pistol was leveled at the American’s breast.

“Aye!” Ali Bahadur was clad in Pathan elegance. His boots were stitched with gilt thread, his turban was of rose-colored silk, and his girdled khalat was gaudily striped. He was a handsome man, with an aquiline face and dark, alert eyes, which just now were lighted with cruel triumph. He laughed mockingly.

“I was not mistaken, El Borak. When you fled into the thicket-choked mouth of the gorge, I did not follow you as the others did. They ran headlong into the copse, on foot, bawling like bulls. Not I. I did not think you would flee on down the gorge until my men cornered you. I believed that as soon as you got out of their sight you would climb the wall, though no man has ever climbed it before. I knew you would climb out on this side, for not even Shaitan the Damned could scale those sheer precipices on the other side of the gorge.

“So I galloped back up the valley to where, a mile north of the spot where we camped, another gorge opens and runs westward. This path leads up out of that gorge and crosses the ridge and here turns southwesterly–as I knew you knew. My steed is swift! I knew this point was the only one at which you could reach this trail, and when I arrived, there were no boot prints in the dust to tell me you had reached it and passed on ahead of me. Nay, hardly had I paused when I heard stones rattling down the cliff, so I dismounted and awaited your coming! For only through that cleft could you reach the path.”

“You came alone,” said Gordon, never taking his eyes from the Orakzai. “You have more guts than I thought.”

“I knew you had no guns,” answered Ali Bahadur. “I saw you empty them and throw them away and draw your knife as you fought your way through my warriors. Courage? Any fool can have courage. I have wits, which is better.”

“You talk like a Persian,” muttered Gordon. He was caught fairly, his scabbards empty, his knife arm hanging at his side. He knew Ali would shoot at the slightest motion.

“My brother Afdal Khan will praise me when I bring him your head!” taunted the Orakzai. His Oriental vanity could not resist making a grandiose gesture out of his triumph. Like many of his race, swaggering dramatics were his weakness; if he had simply hidden behind a rock and shot Gordon when he first appeared, Ali Bahadur might be alive today.

“Why did Afdal Khan invite us to a feast and then murder my friends?” Gordon demanded. “There has been peace between the clans for years.”

“My brother has ambitions,” answered Ali Bahadur. “The Afridis stood in his way, though they knew it not. Why should my brother waste men in a long war to remove them? Only a fool gives warning before he strikes.”

“And only a dog turns traitor,” retorted Gordon.

“The salt had not been eaten,” reminded Ali. “The men of Kurram were fools, and thou with them!” He was enjoying his triumph to the utmost, prolonging the scene as greatly as he dared. He knew he should have shot already.