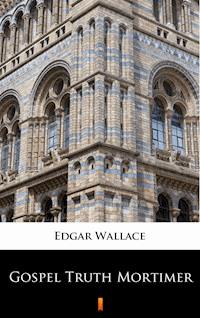 One of the most prolific writers of the twentieth century, Edgar Wallace was an immensely popular author, who created exciting thrillers with tales of treacherous crooks and hard-boiled detectives. Over the rest of his life, Wallace produced some 173 books and wrote 17 plays. These were largely adventure narratives with elements of crime or mystery, and usually combined a bombastic sensationalism with hammy violence. This hitherto uncollected mini-series of four delightful stories features the veracious but impecunious Right Honorable George Mortimer, the son of a British lord, who earns his living as a London taxi-driver.

His Start in Life

As Cheap as Water

The Agent of Kings

His Start in Life

WHEN a millionaire receives a letter which suggests that he should hand to a messenger some thousands of pounds, failing which he will be kidnapped at some time and place convenient to the writer, the millionaire–if he possesses a sense of humour–will laugh and send the letter to the police.

Mr. Chell had no sense of humour whatsoever, and he received the letter when it came with profuse perspiration. He did not send the letter to the police, because he felt in some way that such an action would annoy the kidnappers if they were genuine, and was unnecessary if they were not.

Instead, he looked round for enemies, and found them in his own household; and mainly an inoffending typist-secretary felt the brunt of his funk, because she was a woman and could not hit back.

Then Chell got into the habit of taking friends home “for company,” and he thought of impecunious Mortimer, and discovered him in a quiet hotel in Essex Street.

It was on the second day that Chell fixed the visit of George Mortimer–an interval of time long enough to allow certain interested watchers of the millionaire to make a move.

“Then I’ll pick you up on the Embankment?” asked Chell a little anxiously. “Of course, I’ll come up to the hotel for you, if you like?”

“Not at all,” said Mortimer, as he fixed his monocle more firmly. “I desire to leave Essex Street without ostentation. I am naturally a modest man.”

“That’s all right,” said Chell, who, as has been pointed out, had no humour whatever, “I’ll pick you up in front of Somerset House. So long!” And he went skipping down the steps of the hotel to his palatial car.

Mortimer went back to the smoke-room, and sat down to figure things out. The man with the diamond ring, who had arrived that morning, fixed him with a speculative eye from the other side of the room, and waited till Mortimer had settled himself, then rose and crossed to him.

“Excuse me,” said the man with the diamond ring, taking his cigar from his mouth, “was that my friend, Mr. Chell, you were speaking with?”

George Mortimer looked up at the square-faced, smiling gentleman.

“It was indeed your friend, Mr. Chell,” he said politely.

“He’s worth a million, that fellow,” said the stranger.

“I have never counted his money,” replied Mortimer, “but I’ll accept your estimate.”

The other man was momentarily nonplussed.

“I saw him here last night with you,” said the intruder–for intruder upon George Mortimer’s thoughts he undoubtedly was–“and recognised him.”

“I thought you arrived this morning?” said Mortimer curiously; and the haste of his interrogator to explain his faux pas confirmed George in his worst suspicions.

“Yes; moved down from the Sav-voy–dined here with a friend last night.”

“Cobby, Cobby!” he said reprovingly, “to put it over me! I, who was present in the Tombs Court when Judge Garner sent you to States Penitentiary for the best part of a year, for selling land which wasn’t yours to the green goods of New Jersey!”

The man addressed as Cobby was something more than startled.

“Why–why!” he gasped, “’ain’t you that detective feller?”

“I was, but ain’t,” replied George. “I am too honest for a detective agency–it lasted three months, Cobby, and then I broke loose and came home ninth class on a cattle boat. Oh, by the way, Cobby, Mr. Chell tells me he’s had threatening letters from people who say they will kidnap him if he doesn’t pay eight thousand pounds by Saturday.”

“You don’t say!” said the astonished man, lighting his cigar again. He might be pardoned if his hand trembled a little, for, though he was one of the best “confidence men” in the world, he was a little upset by the unexpected recognition.

”Me, Mr. Mortimer?” asked the astounded and outraged Cobby.

“You,” said George Mortimer. “Kidnapping is a side-line of yours, now I come to think of it. You’re the man who held Mayor Gilly to ransom in Paradise City, aren’t you?”

“If I die this minute–” protested Cobby, raising his right hand impressively.

It was no coincidence that Mr. Cobham had arrived at the hotel the day following Chell’s call. Not at all. But as it happened, it was so much money wasted.

The Honourable George Mortimer left the hotel that afternoon without any exact idea as to when he would return.

He had taken the proprietor aside and told him things.

“I expected to get a letter,” ho said, “and a cheque from a man who owes me a lot of money. I have the letter, but the cheque has not come–and I doubt if it will come.”

“I know,” said Mortimer, and screwed his glass into his right eye with some determination. “You’re an awfully good chap, but I owe you for three weeks board and lodging, and I have no prospect of paying you. You had better keep my boxes–there are one or two curiosities I brought from Java which will fetch the price of the bill–you can let me have the difference when I call. I only ask that you allow me to take away a few necessities.”

“You can stay here, sir,” said the emotional proprietor, “till the cows come home.”

The only son of impecunious Lord Cleghorn smiled and patted the other on the back.

“My dear lad,” he said, “the cows wouldn’t be mine–my dear father owes his milkman quite a lot of money. One tip I give you which will be of value:–a gentleman named Cobham, who is staying here, is a crook.”

“He left half an hour ago,” replied the landlord.

“The devil he did!” said George.

So he went forth to the Embankment with a handbag and a desire for adventure and about eighteen shillings in ready cash; and he had not waited more than ten minutes when Chell found him. Chell drove in a boudoir on wheels, all lacquer and silver and Cee-springs. And the interior of the motor-car was upholstered and downy and full of spring flowers.

“My wife is on the Riviera, I forgot to tell you that,” explained Chell. “I’m all alone, and this business is upsetting me; the police pooh-pooh it, but I assure you I’m worried. Now, suppose these fellows got me–what would they do?”

He speculated on the possibility at some length. He was the same unhealthy-looking Chell whom Mortimer had known at Harrow. Horribly prosperous, as he had always been–a little toady–likewise unchanged.

“How rum!” said Mortimer as the car went spinning along the Portsmouth Road.

“What is rum?” asked Chell.

“Everything,” replied the other vaguely.

Chell returned to his thoughts.

He took from a cunning pocket in the upholstering of the car the prettiest little silver-plated Smith-Wesson revolver George had ever seen.

“They’ll have a little trouble to get me,” he said.