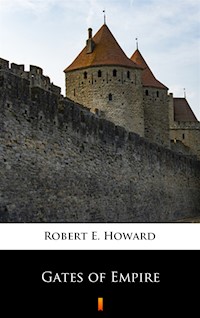 The castles of the Twelfth Century, fortresses rather than mere dwellings, were built for defense, not comfort. The hall through which the drunken band was hallooing was broad, lofty, windy, strewn with rushes, now but faintly lighted by the dying embers in a great ill-ventilated fireplace. Rude, sail-like hangings along the walls rippled in the wind that found its way through.

THE CLANK of the sour sentinels on the turrets, the gusty uproar of the Spring winds, were not heard by those who reveled in the cellar of Godfrey de Courtenay’s castle; and the noise these revelers made was bottled up deafeningly within the massive walls.

A sputtering candle lighted those rugged walls, damp and uninviting, flanked with wattled casks and hogsheads over which stretched a veil of dusty cobwebs. From one barrel the head had been knocked out, and leathern drinking- jacks were immersed again and again in the foamy tide, in hands that grew increasingly unsteady.

Agnes, one of the serving wenches, had stolen the massive iron key to the cellar from the girdle of the steward; and rendered daring by the absence of their master, a small but far from select group were making merry with characteristic heedlessness of the morrow.

Agnes, seated on the knee of the varlet Peter, beat erratic time with a jack to a ribald song both were bawling in different tunes and keys. The ale slopped over the rim of the wobbling jack and down Peter’s collar, a circumstance he was beyond noticing.

The other wench, fat Marge, rolled on her bench and slapped her ample thighs in uproarious appreciation of a spicy tale just told by Giles Hobson. This individual might have been the lord of the castle from his manner, instead of a vagabond rapscallion tossed by every wind of adversity. Tilted back on a barrel, booted feet propped on another, he loosened the belt that girdled his capacious belly in its worn leather jerkin, and plunged his muzzle once more into the frothing ale.

“Giles, by Saint Withold his beard,” quoth Marge, “madder rogue never wore steel. The very ravens that pick your bones on the gibbet tree will burst their sides a-laughing. I hail ye–prince of all bawdy liars!”

She flourished a huge pewter pot and drained it as stoutly as any man in the realm.

At this moment another reveler, returning from an errand, came into the scene. The door at the head of the stairs admitted a wobbly figure in close- fitting velvet. Through the briefly opened door sounded noises of the night –slap of hangings somewhere in the house, sucking and flapping in the wind that whipped through the crevices; a faint disgruntled hail from a watchman on a tower. A gust of wind whooped down the stair and set the candle to dancing.

Guillaume, the page, shoved the door shut and made his way with groggy care down the rude stone steps. He was not so drunk as the others, simply because, what of his extreme youth, he lacked their capacity for fermented liquor.