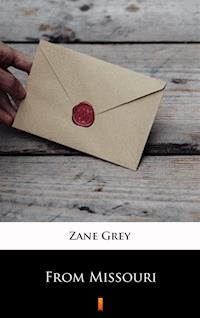 In its first edition of the text based on the author’s holographic manuscript, three sticks working on the Springer-Ranch attempted, through falsification of letters, to prevent East from learning from the arrival of the West to school. Their strategy failed due to the mysterious Frank Owens, whose love letters convinced her that she should come. Nobody knows who he is. 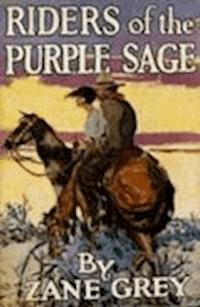 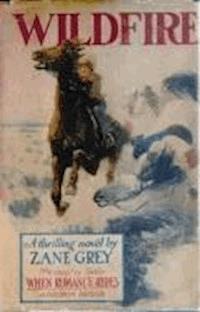 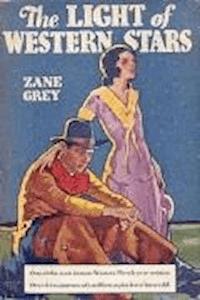 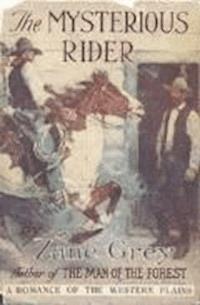 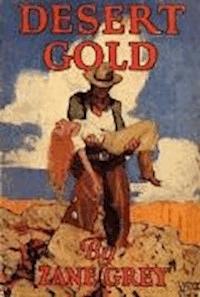 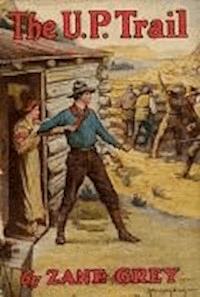 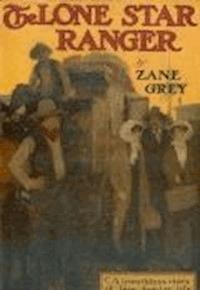 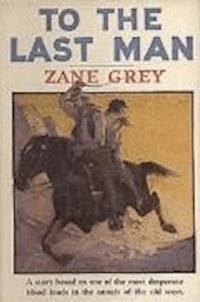 To The Last Man
Zane Grey 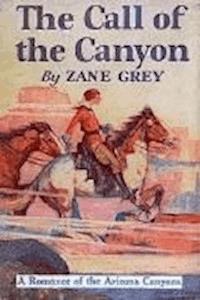 The Call of the Canyon
Zane Grey 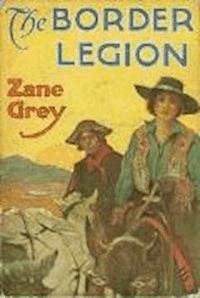 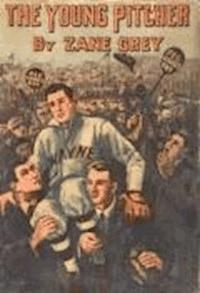 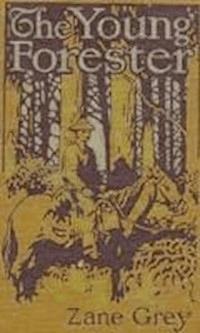 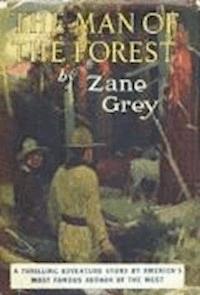 The Man of the Forest
Zane Grey 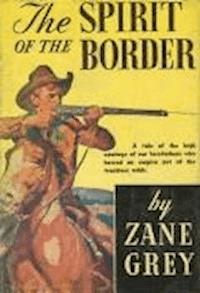 The Spirit of the Border
Zane Grey 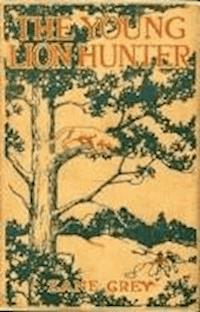 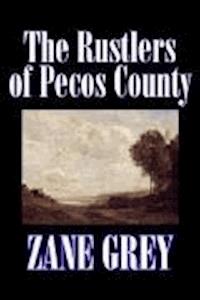 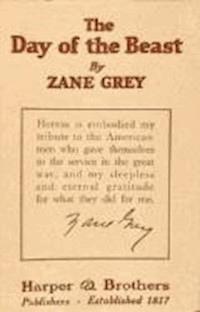 The Day of the Beast
Zane Grey 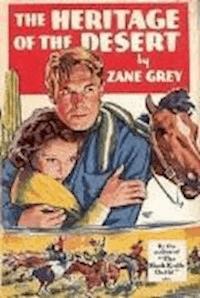 The Heritage of the Desert
Zane Grey 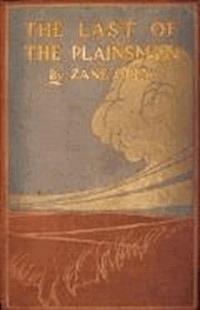 The Last of the Plainsmen
Zane Grey 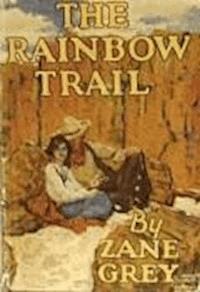 WITH jingling spurs a tall cowboy stalked out of the post office to confront his three comrades crossing the wide street from the saloon opposite.

“Look heah,” he said, shoving a letter under their noses. “Which one of you longhorns has wrote her again?”

From a gay careless trio his listeners suddenly grew blank, then intensely curious. They stared at the handwriting on the letter.

“Tex, I’m a son-of-a-gun if it ain’t from Missouri!” ejaculated Andy Smith, his lean red face bursting into a smile.

“It shore is,” declared Nevada.

The three cowboys jerked up to look from Tex to one another, and then back at Tex.

“It’s from her,” went on Tex, his voice hushing on the pronoun. “You- all know thet handwritin’. Now how aboot this deal? We swore none of us would write ag’in to this heah schoolmarm. Some one of you has double-crossed the outfit.”

Loud and unified protestations of innocence emanated from his comrades. But it was evident Tex did not trust them, and that they did not trust him or each other.

“Say, boys,” said Panhandle suddenly. “I see Beady in there lookin’ darn’ sharp at us. Let’s get off in the woods somehow.”

“Back to the bar,” replied Nevada. “I reckon us’ll all need stimulants.”

“Beady!” ejaculated Tex, as they turned across the street. “He could be to blame as much as any of us.”

“Shore. It’d be more like Beady,” replied Nevada. “But, Tex, your mind ain’t workin’. Our lady friend from Missouri has wrote before without gettin’ any letter from us.”

“How do we know thet?” demanded Tex suspiciously. “Shore the boss’s typewriter is a puzzle, but it could hide tracks. Savvy, pards?”

They entered the saloon and strode to the bar, where from all appearances Tex was not the only one to seek artificial stimulus strength. Then they repaired to a corner, where they took seats and stared at the letter Tex threw down before them.

“It’s her writin’,” added Nevada in awe. “Shore I’d know thet out of a million letters.”

“Ain’t you goin’ to read it to us?” queried Andy Smith.

“Mister Frank Owens,” replied Tex, reading from the address on the letter. “Springer’s Ranch. Beacon, Arizona… Boys, this heah Frank Owens is all of us.”

“Looks like a low-down trick we’re to blame for,” resumed Tex, seriously shaking his hawk-like head. “Heah he reads in a Kansas City paper aboot a schoolteacher wantin’ a job out in dry Arizonie. And he ups an’ writes her an’ gets her a-rarin’ to come. Then, when she writes an’ tells us she’s not over forty, then us quits like yellow coyotes. An’ we four anyhow shook hands on never writin’ her again. Wal, somebody did, an’ I reckon you-all think me as big a liar as I think you. But thet ain’t the point. Heah’s another letter to Mister Owens an’ I’ll bet my saddle it means trouble. Shore, I’m plumb afraid to read it.”

Tex snatched the letter out of Andy’s hand.

“Cowboy, you’re too poor educated to read letters from ladies,” observed Tex. “Gimme a knife, somebody… Say, it’s all perfumed.”

Tex impressively spread out the letter and read laboriously:

Your last letter has explained away much that was vague and perplexing in your other letters.

It has inspired me with hope and anticipation. I shall not take time now to express my thanks, but hasten to get ready to go West. I shall leave tomorrow and arrive at Beacon on June 19 at 4:30 p.m. You see I have studied the timetable.

“My Gawd, fellers, today’s the Nineteenth!”

“Wal, Springer needs a schoolmarm at the ranch,” finally spoke up the practical Andy. “There’s half a dozen kids growin’ up without any schoolin’, not to talk about other ranches. I heard the boss say this hisself.”

“Who the hell did it?” demanded Tex in a rage with himself and his accomplices.

“What’s the sense in hollerin’ aboot thet now?” returned Nevada. “It’s done. She’s comin’. She’ll be on the Limited. Reckon us’re got five hours. It ain’t enough. What’ll we do?”

“I can get awful drunk in thet time,” contributed Panhandle nonchalantly.

“Ahuh! An’ leave it all to us,” retorted Tex scornfully. “But we got to stand pat on this heah deal. Don’t you know this is Saturday an’ thet Springer will be in town?”

“Aw, Lord! We’re all goin’ to get fired,” declared Panhandle. “Serves us right for listenin’ to you, Tex. Us can all gamble this trick hatched in your head.”

“Not my haid more’n yours or anybody,” returned Tex hotly.

“Say, you locoed cowpunchers,” interposed Nevada. “What’ll we do?”

“We’ll have to tell Springer.”

“But, Tex, the boss’d never believe us about not followin’ the letters up. He’d fire the whole outfit.”

“But he’ll have to be told somethin’,” returned Panhandle stoutly.

“Shore he will,” went on Tex. “I’ve an idea. It’s too late now to turn this poor schoolmarm back. An’ somebody’ll have to meet her. Somebody’s got to borrow a buckboard an’ drive her out to the ranch.”

“Excuse me!” replied Andy. And Panhandle and Nevada echoed him. “I’ll ride over on my hoss, an’ see you-all meet the lady,” Andy added.

Tex had lost his scowl, but he did not look as if he favorably regarded Andy’s idea. “Hang it all!” he burst out hotly. “Can’t some of you gents look at it from her side of the fence? Nice fix for any woman, I say. Somebody ought to get it good for this mess. If I ever find out…”

“Go on with your grand idea,” interposed Nevada.

“You-all come with me. I’ll get a buckboard. I’ll meet the lady an’ do the talkin’. I’ll let her down easy. An’ if I cain’t head her back, we’ll fetch her out to the ranch an’ then leave it up to Springer. Only we won’t tell her or him or anybody who’s the real Frank Owens.”

“What I want to know is who’s goin’ go do the talkin’ to the boss?” queried Panhandle. “It mightn’t be so hard to explain now. But after drivin’ up to the ranch with a woman! You-all know Springer’s shy. Young an’ rich, like he is, an’ a bachelor… he’s been fussed over so he’s plumb afraid of girls. An’ here you’re fetchin’ a middle-aged schoolmarm who’s romantic an’ mushy! My Gawd, I say send her home on the next train.”

“Pan, you’re wise on hosses an’ cattle, but you don’t know human nature, an’ you’re daid wrong about the boss,” rejoined Tex. “We’re in a bad fix, I’ll admit. But I lean more to fetchin’ the lady up than sendin’ her back. Somebody down Beacon way would get wise. Mebbe the schoolmarm might talk. She’d shore have cause. An’ suppose Springer hears about it… that some of us or all of us played a low-down trick on a woman. He’d be madder at that than if we fetched her up. Likely he’ll try to make amends. The boss may be shy on girls but he’s the squarest man in Arizona. My idea is we’ll deny any of us is Frank Owens, an’ we’ll meet Miss… Miss… what was that there name?… Miss Jane Stacey and fetch her up to the ranch, an’ let her do the talkin’ to Springer.”

During the next several hours, while Tex searched the town for a buckboard and team he could borrow, the other cowboys wandered from the saloon to the post office and back again, and then to the store, the restaurant, and all around. The town had gradually filled up with Saturday visitors.

“Boys, there’s the boss,” suddenly broke out Andy, pointing, and he ducked into the nearest doorway, which happened to be that of another saloon. It was half full of cowboys, ranchers, Mexicans, tobacco smoke, and noise.

Andy’s companions had rushed pell-mell after him, and not until they all got inside did they realize that this saloon was a rendezvous for cowboys decidedly not on friendly terms with Springer’s outfit. Nevada was the only one of the trio who took the situation nonchalantly.

“Wal, we’re in, an’ what the hell do we care for Beady Jones an’ his outfit,” he remarked, quite loud enough to be heard by others besides his friends.

Naturally they lined up at the bar, and this was not a good thing for young men who had an important engagement and who must preserve sobriety. After several rounds of drinks had appeared, they began to whisper and snicker over the possibility of Tex meeting the boss.

“If only it doesn’t come off until Tex gets our forty-year-old schoolmarm from Missouri with him in the buckboard!” exclaimed Panhandle in huge glee.

“Shore. Tex, the handsome galoot, is most to blame for this mess,” added Nevada. “Thet cowboy won’t be above makin’ love to Jane, if he thinks we’re not around. But, fellows, we want to be there.”

Presently a tall striking-looking cowboy, with dark face and small bright eyes like black beads, detached himself from a group of noisy companions, and confronted the trio, more particularly Nevada.

He was coolly impertinent, and his action and query noticeably stilled the room. Andy and Panhandle leaned back against the bar. They had been in such situations before and knew who would do the talking for them.

“Howdy, Jones,” replied Nevada coolly and carefully. “We happened to bust in here by accident. Reckon we’re usually more particular what kind of company we mix with.”

“Ahuh! Springer’s outfit is shore a stuck-up one,” sneered Beady Jones in a quite loud tone. “So stuck up they won’t even ride around drift fences.”