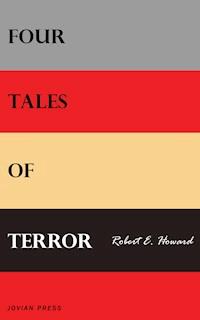 THE FEARSOME TOUCH OF DEATH

THE CAIRN ON THE HEADLAND

THE NIGHT was strangely still. As we sat upon the wide veranda, gazing out over the broad, shadowy lawns, the silence of the hour entered our spirits and for a long while no one spoke.

Then far across the dim mountains that fringed the eastern skyline, a faint haze began to glow, and presently a great golden moon came up, making a ghostly radiance over the land and etching boldly the dark clumps of shadows that were trees. A light breeze came whispering out of the east, and the unmowed grass swayed before it in long, sinuous waves, dimly visible in the moonlight; and from among the group upon the veranda there came a swift gasp, a sharp intake of breath that caused us all to turn and gaze.

Faming was leaning forward, clutching the arms of his chair, his face strange and pallid in the spectral light; a thin trickle of blood seeping from the lip in which he had set his teeth. Amazed, we looked at him, and suddenly he jerked about with a short, snarling laugh.

“There’s no need of gawking at me like a flock of sheep!” he said irritably and stopped short. We sat bewildered, scarcely knowing what sort of reply to make, and suddenly he burst out again.

“Now I guess I’d better tell the whole thing or you’ll be going off and putting me down as a lunatic. Don’t interrupt me, any of you! I want to get this thing off my mind. You all know that I’m not a very imaginative man; but there’s a thing, purely a figment of imagination, that has haunted me since babyhood. A dream!” he fairly cringed back in his chair as he muttered, “A dream! And God, what a dream! The first time—no, I can’t remember the first time I ever dreamed it—I’ve been dreaming the hellish thing ever since I can remember. Now it’s this way: there is a sort of bungalow, set upon a hill in the midst of wide grasslands—not unlike this estate; but this scene is in Africa. And I am living there with a sort of servant, a Hindoo. Just why I am there is never clear to my waking mind, though I am always aware of the reason in my dreams. As a man of a dream, I remember my past life (a life which in no way corresponds with my waking life), but when I am awake my subconscious mind fails to transmit these impressions. However, I think that I am a fugitive from justice and the Hindoo is also a fugitive. How the bungalow came to be there I can never remember, nor do I know in what part of Africa it is, though all these things are known to my dream self. But the bungalow is a small one of a very few rooms, and it situated upon the top of the hill, as I said There are no other hills about and the grasslands stretch to the horizon in every direction; knee-high in some places, waist-high in others.

“Now the dream always opens as I am coming up the hill, just as the sun is beginning to set. I am carrying a broken rifle and I have been on a hunting trip; how the rifle was broken, and the full details of the trip, I clearly remember—dreaming. But never upon waking. It is just as if a curtain were suddenly raised and a drama began; or just as if I were suddenly transferred to another man’s body and life, remembering past years of that life, and not cognizant of any other existence. And that is the hellish part of it! As you know, most of us, dreaming, are, at the back of our consciousness, aware that we are dreaming. No matter how horrible the dream may become, we know that it is a dream, and thus insanity or possible death is staved off. But in this particular dream, there is no such knowledge. I tell you it is so vivid, so complete in every detail, that I wonder sometimes if that is not my real existence and this a dream! But no; for then I should have been dead years ago.

“As I was saying, I come up the hill and the first thing I am cognizant of that it is out of the ordinary is a sort of track leading up the hill in an irregular way; that is, the grass is mashed down as if something heavy had been dragged over it. But I pay no especial attention to it, for I am thinking, with some irritation, that the broken rifle I carry is my only arm and that now I must forego hunting until I can send for another.

“You see, I remember thoughts and impressions of the dream itself, of the occurrences of the dream; it is the memories that the dream ‘I’ had, of that other dream existence that I can not remember. So. I come up the hill and enter the bungalow. The doors are open and the Hindoo is not there. But the main room is in confusion; chairs are broken, a table is overturned. The Hindoo’s dagger is lying upon the floor, but there is no blood anywhere.

“Now, in my dreams, I never remember the other dreams, as sometimes one does. Always it is the first dream, the first time. I always experience the same sensations, in my dreams, with as vivid a force as the first time I ever dreamed. So. I am not able to understand this. The Hindoo is gone, but (thus I ruminate, standing in the center of the disordered room) what did away with him? Had it been a raiding party of Negroes they would have looted the bungalow and probably burned it. Had it been a lion, the place would have been smeared with blood. Then suddenly I remember the track I saw going up the hill, and a cold hand touches my spine; for instantly the whole thing is clear: the thing that came up from the grasslands and wrought havoc in the little bungalow could be naught else except a giant serpent. And as I think or the size of the spoor, cold sweat beads my forehead and the broken rifle shakes in my hand.

“Then I rush to the door in a wild panic, my only thought to make a dash for the coast. But the sun has set and dusk is stealing across the grasslands. And out there somewhere, lurking in the tall grass is that grisly thing—that horror. God!” The ejaculation broke from his lips with such feeling that all of us started, not realizing the tension we had reached. There was a second’s silence, then he continued:

“So I bolt the doors and windows, light the lamp I have and take my stand in the middle of the room. And I stand like a statue—waiting—listening. After a while the moon comes up and her haggard light drifts though the windows. And I stand still in the center of the room; the night is very still—something like this night; the breeze occasionally whispers through the grass, and each time I start and clench my hands until the nails bite into the flesh and the blood trickles down my wrists—and I stand there and wait and listen but it does not come that night!” The sentence came suddenly and explosively, and an involuntary sigh came from the rest; a relaxing of tension.

“I am determined, if I live the night through, to start for the coast early the next morning, taking my chance out there in the grim grasslands —with it. But with morning, I dare not. I do not know in which direction the monster went; and I dare not risk coming upon him in the open, unarmed as I am. So, as in a maze, I remain at the bungalow, and ever my eyes turn toward the sun, lurching relentless down the sky toward the horizon. Ah, God! if I could but halt the sun in the sky!”

The man was in the clutch of some terrific power; his words fairly leaped at us.

“Then the sun rocks down the sky and the long gray shadows come stalking across the grasslands. Dizzy with fear, I have bolted the doors and windows and lighted the lamp long before the last faint glow of twilight fades. The light from the windows may attract the monster, but I dare not stay in the dark. And again I take my stand in the center of the room—waiting.”

There was a shuddersome halt. Then he continued, barely above a whisper, moistening his lips: “‘There is no knowing how long I stand there; Time has ceased to be and each second is an eon; each minute is an eternity, stretching into endless eternities. Then, God! but what is that?” He leaned forward, the moonlight etching his face into such a mask of horrified listening that each of us shivered and flung a hasty glance over our shoulders.

“Not the night breeze this time,” he whispered. “Something makes the grasses swish-swish—as if a great, long, plaint weight were being dragged through them. Above the bungalow it swishes and then ceases—in front of the door; then the hinges creak—creak! The door begins to bulge inward—a small bit—then some more!” The man’s arms were held in front of him, as if braced strongly against something, and his breath came in quick gasps. “And I know I should lean against the door and hold it shut, but I do not, I can not move. I stand there, like a sheep waiting to be slaughtered—but the door holds!” Again that sigh expressive of pent-up feeling.

He drew a shaky hand across his brow. “And all night I stand in the center of that room, as motionless as an image, except to turn slowly, as the swish-swish of the grass marks the fiend’s course about the house. Ever I keep my eyes in the direction of the soft, sinister sound. Sometimes it ceases for an instant, or for several minutes, and then I stand scarcely breathing, for a horrible obsession has it that the serpent has in some way made entrance into the bungalow, and I start and whirl this way and that, frightfully fearful of making a noise, though I know not why, but ever with the feeling that the thing is at my back. Then the sounds commence again and I freeze motionless.